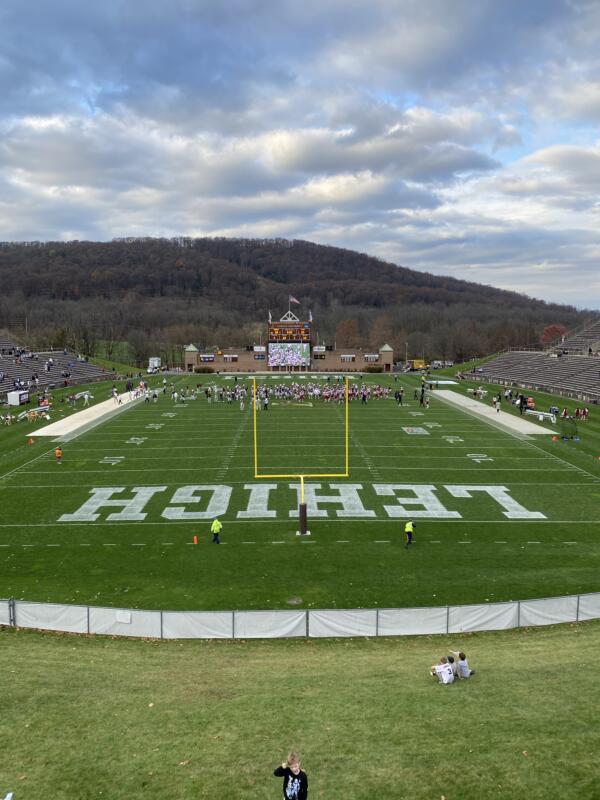 For both of these teams yesterday, both of whom are out of FCS and Patriot League contention, they were looking to get another check mark in the win column and looking to finish off their respective seasons with a good last few games. Today would prove to be just that, with a lot of back and forth, no one had any idea who was going to win until the game clock hit double zeros. Both the Lehigh and Colgate offenses had strong showings in yesterday’s game. Both teams were moving the ball down the field at a very fast rate, especially in the fourth quarter. Lehigh scored a touchdown to go up 29-26 with 3:58 left in the fourth quarter. Then, Colgate almost immediately responded with a touchdown of their own with 1:15 left and Lehigh having only one timeout. However, Lehigh proved today that they can fight through adversity, was able to muster one final drive and on an 11-yard touchdown pass from Dante Perri to Eric Johnson, put Lehigh ahead for good with 22 seconds left in the game in one of their most exciting wins in the last three years as the Mountain Hawks won by a final score of 36-33. Lets go into a deeper recap of how each team performed . . .

Colgate on offense had themselves a great day behind the great quarterback play of Mike Brescia, who had 330 yards passing with two touchdowns and one interception, and 44 yards rushing with another touchdown on the ground to give him three total for the game. Colgate scored at least one touchdown in all four quarters. The most impressive one was a 51-yard touchdown pass from Brescia to Treyvohn Saunders in which Brescia was able to avoid the pressure and make the pass. On the ground, the Raiders had 114 yards on 40 carries, 2.85 yards per carry. They were led by Jaedon Henry who had 51 yards on ten carries. The Raider offense had one of their best games of the season with their second highest scoring total of 33 points. They were able to consistently drive down the field against a tough Lehigh defense. They did not get many big chunk plays but took what was in front of them and kept making small gains which led to long, sustained drives. Overall, a very good day for the Colgate Raider offense but it would not be enough in this game.

Colgate’s defense had a game they may not want to remember. They came in against a team that had many struggles all year long and could not stop the Lehigh offense through the air. They did not force any turnovers and could not get off of the field. The Raiders allowed 490 total yards with 424 coming through the air. Eric Johnson kept poking holes in the Colgate defense throughout the entire game. The one positive that Colgate did on this side of the ball is that they were able to contain Gaige Garcia and Jack DiPietro for most of the game aside from a 17-yard touchdown run from DiPietro. Overall, Colgate has a lot of stuff to work on and has to figure out how to limit the passing yards if they are going to finish off their season on a good note next Saturday.

Lehigh had by far its best day on offense this year and perhaps one of its best offensive days in the last three years. It was definitely an impressive showing for them today on the offensive side of the ball. Dante Perri had himself a career day as a Lehigh Mountain Hawk. He had a total of 424 passing yards with two touchdowns through the air and had a total of four touchdowns. He was calm under pressure all day long as he engineered a game winning drive. He was also very accurate as he threw no interceptions. He was also able to roll out under pressure and pick up some small chunk gains. Receiving wise for Lehigh, Eric Johnson and Jalen Burbage both had themselves career days as well. Johnson had 2018 yards on 11 receptions with his day being capped off by a game winning 11-yard touchdown pass from Perri. He consistently got open the entire afternoon and was able to make defenders miss in space. Then, Jalen Burbage also had a great day with 107 yards on eight receptions with an 18-yard Randy Moss type catch as the highlight of his day. The strength of Lehigh’s game today was through the air, which is not on par with the previous games this year as they relied heavily on the ground to gain yards. Lehigh had 56 yards today on the ground with Gaige Garcia leading the way with 47. Overall, the Mountain Hawks look to have made some big strides going into their final and perhaps their most important game of the season against Lafayette.

On defense, they had a lot of trouble stopping Colgate on their first two drives as they went right down the field and scored. But the Mountain Hawk defense adopted a bend but not break mentality and tightened as the Raiders got into the red zone. Lehigh was able to stop a two-point conversation after a touchdown which proved to be quite critical in the game. It was definitely not an easy task coming into today’s game with Colgate having one of the better offenses in the Patriot League. With that being said, with the offense struggling out of the gate, they were able to keep Lehigh in the game. The highlight of the day on this side of the ball for Lehigh was an interception by Nate Norris to seal the deal for Lehigh and get themselves back in the W column for the first time since September 10th, just over two months ago.