Now that schools have the green light for athletics, what do they need to do? What does a set of guidelines look like? 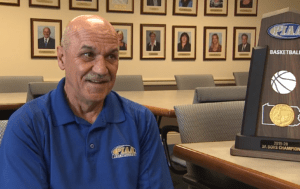 For the first time in a while, Bob Lombardi was able to smile about PA athletics. Thanks to FOX 43’s Alex Cawley for the picture and interview at the bottom of this article.

It’s what everyone in the Covid 19 era sports world has been waiting for since March, when the Governor of Pennsylvania in essence shut down high school sports, ending many a high school athletic career early and sending shock waves through the high school sports world. Players and coaches alike have been waiting, mostly impatiently, for the green light to resume sports. Several weeks ago during a PIAA meeting, those waiting received their first piece of good news when the board voted to allow teams entering the green phase of Governor Wolf’s phased approach to reopening the state to resume sports. But there was a caveat that sort of slipped by–the schools and facilities were in effect closed by the government until July 1.

On Wednesday afternoon the governor finally produced the news they’ve all been waiting for, that it’s time for sports to resume.  Just what does that mean? Well, it could be quite confusing with the long list of guidelines presented but PIAA Executive Director Bob Lombardi and Assistant Executive Director Melissa Mertz helped to simplify the process. We’ll walk you through what’s expected with their help as well as some suggestions and guidance from others.

First off, yes, teams can resume working with their coaches on school property. But first each individual school district must come up with a plan of action that fits their particular school district with regards to the Covid 19 outbreak. The Governor’s list can be found HERE. However, districts do not need to use the entirety of that list. “There are guidelines and recommendations from the National Federation of High Schools, Geisinger, UPMC, CDC, the W.H.O. and many more outlets available. Use what fits your school best. There is no “one size fits all” plan. And remember, these are just guidelines, not rules. We realize every school is in a different situation.

“We put out a release last week about forming a plan,” said Lombardi. “We told them they should really get started on forming a plan for their athletic departments to get them back on the playing surfaces. We told them you gotta get something ready so when the guidelines come out, you can go. I think some schools COULD start tomorrow because they did so,” Lombardi told FOX 43 reporter Alex Cawley.

The first thing the PIAA wants you to know is “Don’t go overboard,” said Lombardi. “We don’t want teams to run out and put 150 kids in a huddle and start scrimmaging. We have to be careful. Look, we want people to be smart. Don’t try to run, let’s walk at first. Follow the set of guidelines that fits your school best, or just use the parts that are best for your school. Work on these things, because we don’t want to go backwards.”

Homer Delattre is the Athletic Director and Head football coach at Hollidaysburg and is the Secretary for the Pennsylvania State Football Coaches Association. He got a jump and started creating a plan several weeks ago, and it passed the vote at the school board meeting last night. “Our solicitor was very impressed and felt our document was rock solid. Fortunately for us, we began this process several weeks ago, but the PIAA last week told everyone to start doing what we did. Our board last night unanimously passed the document. There weren’t many questions about current, but instead they had questions about the future for fans, capacities in gyms and such. We just aren’t at the point yet. People need to understand, this is not for the fall, what we are doing right now will probably change in a month.  This is just so we can get back to work.”

Looking at the document released Wednesday by the Governor’s office, there are several items that the twitter world has already poked at, such as “Coaching staff and other adult personnel should wear face coverings (masks or face shields) at all times, unless doing so jeopardizes their health” and “avoid shaking hands, fist bumps, or high fives.” The key here is the word “should.” It is not mandatory, but rather highly suggested. “Screening players for symptoms during practices” may also be one of those items, however, if you’re in a county that’s only had a few Covid cases, that may not be necessary.

Some examples of how Hollidaysburg adjusted the guidelines are:

“We looked at them all,” said Delattre of the guidelines they used to form their own set. “Obviously what works for us here in a county that didn’t have many cases at all may not work for somewhere like a York or Philly area team. You have to use what you feel will work best for you.”

Rob Oshinskie owns Victory Fitness, a gym with locations in State College and Lewisburg. His business works with a lot of athletes and they have recently opened. He said “we tell kids when they come in here to be smart, but don’t be afraid. We do screening at the door, but let’s be honest, in a gym setting it isn’t always possible for social distancing. We also have to keep safety in mind.  With weightlifting you have to have spotters. And wearing a mask just isn’t something we would recommend while working out.” Oshinskie said they have hand sanitizer stations, but prefers his customers just wash their hands because sanitizers “have chemicals and carcinogens in them.”

Melissa Mertz was happy with what was released. “We felt our recommendations to the Department of Education for these guidelines were represented well. We asked them to treat the PIAA like they did the recreation programs and what they can do,” she told Cawley. “What people need to realize is everything is guidance. All these documents, they’re suggestions, not laws,” said Delattre.  “Every school can develop their own plan using those guidelines and recommendations. Our thought was you don’t want to go overboard and you don’t want to fall short”.  That is the key and what many people may be overlooking.”

Melissa also said the now is a great opportunity to prepare for the fall. “It’s very important that we have a foundation so that in August when we try to have a football game we aren’t shell-shocked. Throughout the summer they can try different things and see what works and what doesn’t work for them.”

“Our plan gives us great flexibility for any situation,” said Delattre. “For example if we go back to yellow or even red, we’ll be ready.  We looked at the different classifications of sports, we looked at the high risk, medium and low risk. They can obviously start in different phases. Our goal, hope, is to keep our kids safe but we want to get to phase four and get the fans back. We aren’t going to jump right in even though we technically could. We’re going to set up some educational classes for our coaches here in the next couple days and get that done. Hopefully by early next week all our sports will begin working out.”

If your district would like to take a look at the Hollidaysburg document or receive some guidance, contact Homer at homer.delattre@hasdtigers.com or billy@pafootballnews.com

Thanks to Alex Cawley and FOX 43