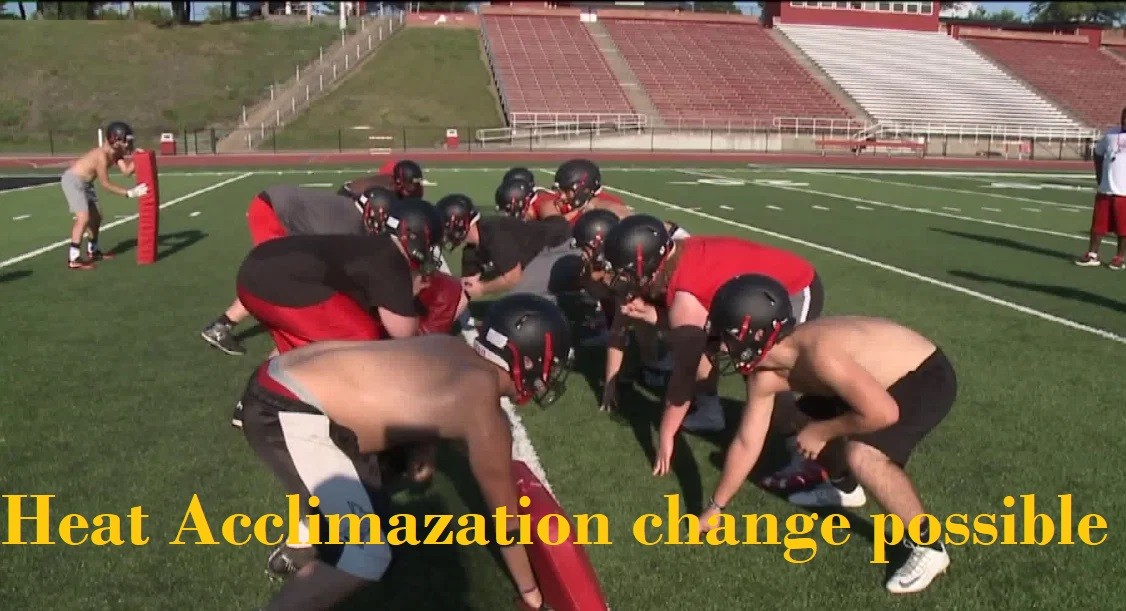 Williamsport lines up during heat acclimatization week in 2018

The PIAA put in a policy in March of 2013 that all teams must go through five consecutive days of heat acclimatization to get used to the heat before camp begins next week. Each athlete must go through the heat practices before they are allowed to start regular practices. The minimum amount of practice time each day this week is three hours with a max of five, three times that week. If a team plans on practicing all five hours on M/W/F, they must go through a two-hour rest period as well.

This made it difficult for coaches when creating schedules because under the new format put in place in 2016 they could either play a scrimmage followed by their first game or they could hold two scrimmages.  Thus, “week zero” was born.  Some coaches wanted that second scrimmage because they felt their teams just wouldn’t be ready.  Other districts saw it as a way to get another game in, helping their bottom line. That may all change.

This past Wednesday at the PIAA football steering committee meeting an idea was floated to change “heat acc” week.  “You’d get five days of mandatory heat acclimation practice, starting that Monday, then on the sixth day, Saturday, teams would be allowed to hold some type of 7v7/lineman challenge type practice with another school” said PSFCA Executive Director Garry Cathell at a coaches meeting on Friday at the Lasch Building at Penn State. “This would, in esscence, allow us to eliminate week zero and make it week one” said Cathell.

Many schools wish to hold their scrimmages on Friday nights just like it would be when the season starts, and that trend is starting to take foot. Several held their second scrimmages on Friday nights in 2019, but the heat practices were not mandatory so there were players that were not able to participate on a Friday for the first scrimmage . One of the problems is that the PIAA now requires 10 days of practice (including heat acc) before a player can have contact.  “It changes that. The PIAA is behind you now and they are saying we’ve got your back, make heat acc week mandatory, hold your five days then have your “light duty, no contact scrimmage”. Then the following week you’d get in 4 days of practice allowing you to have a Friday night scrimmage instead of Saturday” said Cathell.

For example, this fall heat acc starts on August 10th and the official first day of practice would be August 17th. By Friday the 21st all players would reach their 10 day mandatory preseason practice requirement allowing for a Friday night scrimmage as opposed to a Saturday scrimmage.  Some of the coaches believe that the first scrimmage can also be held on a Friday night. “If for example, we held our heat acc the first four days, realistically we could also hold a partial heat acc day on Friday, then that Friday night have our first “scrimmage” said one of the coaches. Most in the room agreed and PSFCA representative to the PIAA, George Shue, said he would present that to the committee for thoughts and/or approval.

The new rule passed an first reading and must pass two more to become official. It wasn’t clear whether or not they were shooting for this year, however, it really wouldnt help teams much this year because most already have their schedules set. Let’s hope “cooler heads” prevail and week zero gets kicked to the sun.