Protect Yourself, Protect Others, Protect the Season: PIAA moves forward with fall season to start on time, releases Return to Competition guidelines

The PIAA approved by a 30-2 vote and released a 24 page Return to Competition: Individual Sport Considerations document which can be reviewed by clicking the picture below: 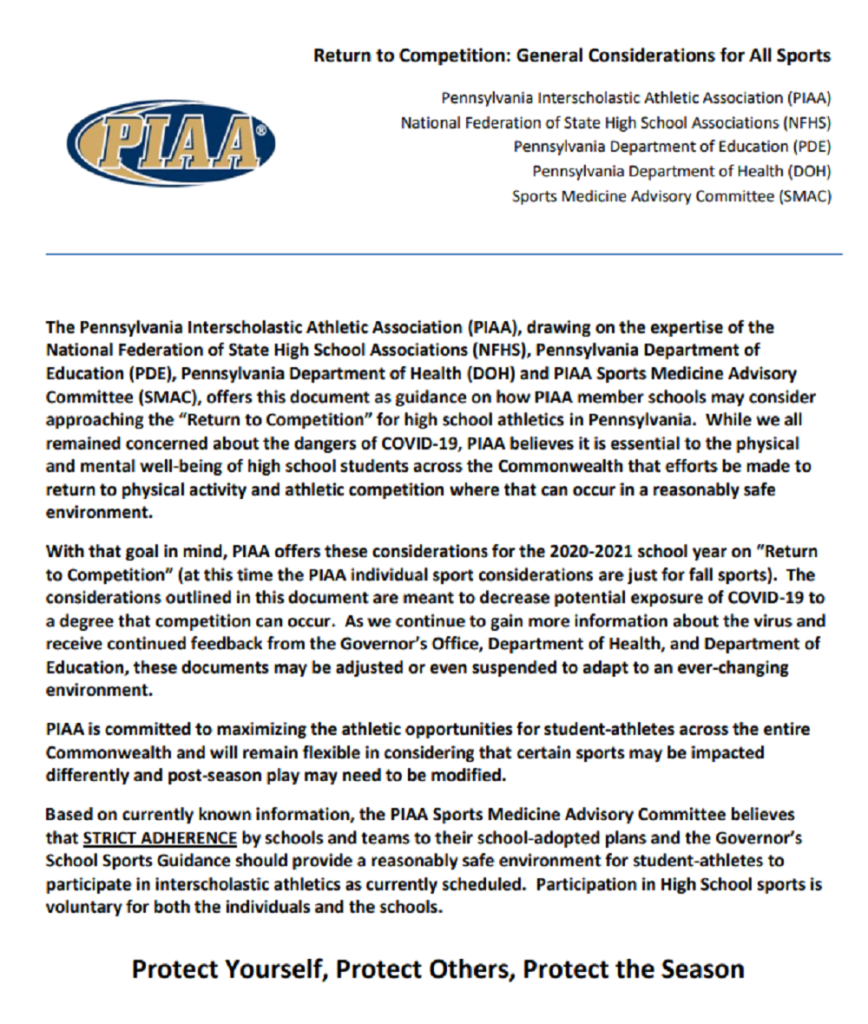 There’s a lot to digest after today’s PIAA board meeting, but the bottom line is fall sports will start on time and teams are expected to adhere to all guidelines according to the PIAA, State Health and State Department of Education as well as the restrictions according to Governor Wolf’s office.

We’ll highlight some of the items here:

That plan to return has a couple of obstacles to hurdle which include the Governors office turning tale, and more recently a rash of school boards starting to rethink whether they even want their schools participating in sports. “We’ll do what we’ve done from the start,’’ said PIAA Executive Director Robert Lombardi. “If (state government) makes a determination not to play, we’ll adhere to that. “But the biggest what if is this: What if we don’t try? If we don’t try to get something out of the season for students, I think we’re failing them and we need to do our darnedest to help them become successful.”” said Dr. Bob Lombardi about why it is so important to try to have as regular a season as possible for fall sports.  “We fully expect everyone to stick to the guidelines we’ve provided so that we can to the best of our ability have a fall season on time. ”

Starting from the beginning, the PIAA opened the door for teams to start at different dates. They gave three options:

The “regular start” with heat acclimatization on Aug. 10 and opening practices on Aug. 17. Contests can start Aug. 20 for golf, Aug. 24 for girls tennis, Aug. 28 for football, and Sept. 4 for cross country, girls volleyball, field hockey and soccer.

The PIAA also outlined a “hybrid start” approach, where the school, league or conference creates its own timetables (within practice guidelines), with competition beginning no later than Oct. 5 unless otherwise cleared by the local district. “As we continue to move forward, PIAA will remain flexible in considering that certain sports may be impacted differently and post-season play may need to be modified,” the release states.

**Important to note,Teams must adhere to all preseason guidelines, including the 15 days of practice rule. If your team has elected a later start date you still must adhere to the no contact with any other team for 10 days before first practice rule**

The talk about missing games due to Covid 19 positive tests was that teams will be able to make up those games at the end of the regular season if they don’t qualify for playoffs. They are leaving it up to the individual conferences and PIAA districts as to whether to call them “no contest” games as opposed to forfeits.  They also elected to removed end of season deadline meaning that games could be made up all the way through the weekend of state championships.

One of the biggest questions was “will there be spectators?”  Right now, the short answer is no. According to Governor Wolf’s restrictions, no spectators are allowed at events. Also key is the 250 person limit at a gathering which means that teams may have to reduce their game time rosters to be able to get to the 250 person limit. Dr. Lombardi is hoping that restriction changes by the start of the season. As of right now, no spectators are allowed.

CONSIDERATIONS FOR SPECTATORS FROM PIAA IF THEY DO BECOME ALLOWED:
At this time spectators for K-12 events are not allowed.
o The Preliminary School Sports Guidance document states that, “The addition of visitors and spectators will be contingent upon future health conditions within the state and local
communities.” We anticipate that more information will be forthcoming from the Governor’s Office and Department of Education.
o Should spectators eventually be permitted to attend contests, we anticipate that such attendance will be subject to some important limitations that were also included in the Preliminary School Sports Guidance:
 Seating areas, including bleachers, must adhere to social distancing requirements of at least 6 feet of spacing for anyone not in the same household. To assist with proper  social distancing, areas should be clearly marked. Adults must face coverings (masks or face shields) at all times.
 Spectators should not enter the field of play or bench areas.
 Nonessential visitors, spectators, and volunteers should be limited when possible, including activities with external groups or organizations.

As for bands, cheerleaders and the such, as of right now the limit is 250 per event outside.  If team A has 50 players and 10 coaches, Team B has 50 players and 10 coaches then you add in the 12 officials you’re already at 132. Then you have stadium personnel, so it’ll be up to local districts to see what can happen as far as bands, cheerleaders and fans.

Transfer rules are another hot topic and Lombardi was adamant when asked what would happen if one school district cancelled fall sports and players wanted to move to another district. “The PIAA transfer rules are in place.”  He also said he really doesn’t see a mass exodus all over the state. His take it seems is one of if the schools cancel, then that’s up to the parents to address their school boards.

What to do if a Covid 19 case comes up? Right now the new CDC guideline requires anyone that’s come in contact with or gets a positive test to quarantine for 10 days. It will be up to the individual schools to contact anyone that needs to be contacted which includes opposing teams if contact was determined during a game.  It’s still unclear whether the entire team or only those in contact will be quarantined.  We’ll seek further information, however, CDC guidelines use contact tracing. Most teams came up with preseason guidelines which include working in small groups to contain any possible large scale quarantines. 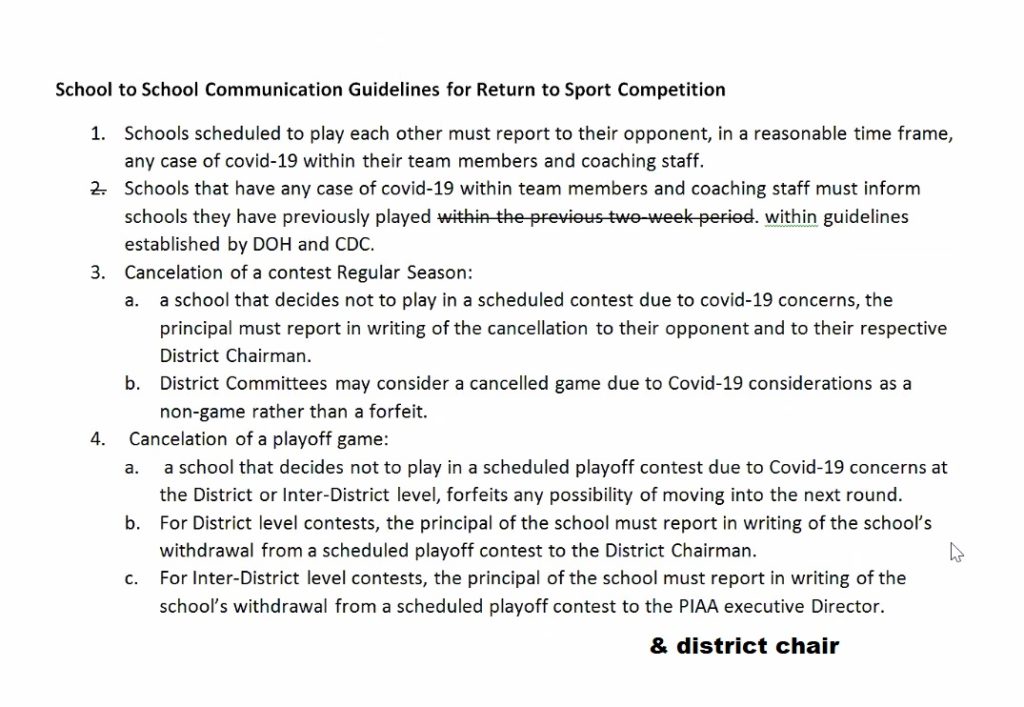 The next PIAA board meeting will be on August 26 at which time they’ll take a look at how things have been going for teams in the preseasons, and whether they need to postpone, make changes or start looking at other scenarios. The bottom line, there were some questions Lombardi did not have the answers for because this is such a unique and fluid situation that things are changing on an almost daily basis. You can certainly expect more changes to come before the season starts.

One thing above all, we must do everything we can, whether we like it or not, to give the kids their season.