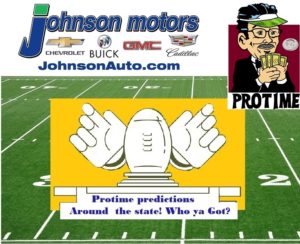 This could only happen to Protime.  Two weeks ago, was the infamous painting fiasco, last week was the equally infamous plumbing escapade.

The Protime family was in need of a new toilet and Protime was firm in his decision to save some bucks and put it in himself.  First of all, he forgot to turn the water completely off and when he unhooked the hose, he got a face full of water.  Then, once he thought the commode was set it still wobbled like a weeble.  Finally, when he figured all was ready, he turned the water on and flushed only to watch a leak gush out from the bottom of the defective tank.  Protime often fumbles when it comes to mechanical inclination.

Luckily, Protime doesn’t need his mechanically inclined skills to predict high school football games each week, just his brilliant mind, a crystal ball, and a flipping coin.  This past week the Consummate Clairvoyant correctly corralled 22 of the 26 contests.  He stands at 172-39 for the year for a .815 accuracy percentage.  For the ninth week of the season he will continue to look at team scoring stats.  The games this week involve many of the top teams and some games where an upset is a distinct possibility.

Southern Columbia 8-0 @ Montoursville 8-0 – Once again Southern’s Tigers are taking on a top-notch AAA team in Montoursville (Southern is AA).  In Protime’s humble opinion, this will be SCA’s biggest test of the year.  The Montoursville Warriors come into the game with the #6 scoring offense (386 points) and the 18th best defense in Pennsylvania (56 points).  The Tigers are now number one in both categories.  They’ve scored 458 points and allowed 20.  Between 7,000 and 8,000 showed up to witness Southern last week, expect close to that again this week to see the Tigers knock off the Warriors 41-14.

Bellwood-Antis 8-0 @ Tussey Mountain 8-0 – The Blue Devils have scored 310 and given up 87 points.  The Titans’ offense has produced 286 points, while the ‘D’ has permitted 98.  Tussey had a scare last week looking ahead to B-A.  This week they will really have their hands full.  Protime’s crystal ball has Bellwood winning a squeaker 21-20.

McGuffey 8-0 @ Avonworth 8-0 – Can’t get much bigger than this down in D-7.  McGuffey has the 12th highest scoring offense.  They’ve amassed 363 points to date.  On the defensive side, the Highlanders have yielded 157.  The Antelopes counter McGuffey’s offense with a stingy defense that has ceded only 84 points.  The Antelopes have a decent offense too, scoring 295 so far.  Protime flipped a coin and Avonworth is the winner 36-28.

Coatesville 6-1 @ Downingtown West 8-0 – The Red Raiders seem to be a spear off this year, but with a win here can bound to the top of D-1 in the 6A class.  They have beaten their opponents in total 243 to 86.  The Whippets of West have the #11 offense in PA, scoring 370 points.  Meanwhile, 144 points have been scored on them.  Potime had to examine this game closely, breaking down all the factors.  Then he came up with a winner in overtime.  Downingtown 31 Coatesville 28.

Wilmington 8-0 @ Hickory 6-2 – Brandon Phillian has the Greyhounds performing at top speed and another likely showdown with Southern Columbia for the state AA title in December.  Protime understands that Wilmington has a young team.  The Greyhounds also have the #8 defense in the state.  They’ve surrendered only 42 points.  The offense is not too shabby either, scoring 341 in 8 games.  Hickory has some good wins this year and will not go down without trying to sting the Greyhounds.  Wilmington is just too strong, they win 28-6.

Central Bucks West 8-0 @ Souderton 7-1 – Central Bucks West now runs the wing-T and they are the talk of District 1, along with Downingtown West.  The Bucks have outscored their opponents 273-88 in eight games.  Souderton’s Indians are rolling too, with their only setback being to North Penn whom CBW edged last week.  Souderton has been efficient outscoring their enemies 233-135.  Expect a slobber-knocker with the Bucks coming out on top 28-24.

Brookville 7-1 vs. Ridgway 7-1 @ Johnsonburg – Protime’s Game of the Week features two pretty good teams.  Brookville has their QB back and firing on all cylinders.  They’ve produced 265 points and allowed 128.  The Elkers have piled up 324 markers, while the #21 defense in the state has yielded only 64.  The Blue Raiders spoiled Ridgway’s undefeated season last year 28-11.  Protime envisions an Elker celebration this time, 25-20.

Berwick 7-1 @ Dallas 8-0 – The Bulldogs have outdistanced opposition 266-72 this year, while the Mountaineers have pasted opponents 371 to 62.  The Dallas offense is 10th in the state in scoring and the defense is 20th in PA in least amount of points allowed.  Protime says to expect a well-played game with Dallas remaining unscathed and winning 20-10.

Pine Grove 7-1 @ Upper Dauphin 8-0 – The Cardinals from Pine Grove are facing the number 2 team in the state in scoring offense.  U.D. has put up an amazing 447 points.  The Trojan ‘D’ has permitted 153.  Pine Grove has scored 255 smackers and allowing 101.  Upper Dauphin will be victorious according to the crystal ball, 44-40.

Central Dauphin 31 Chambersburg 27 – This will not be easy for the Rams, who defeated St. College last week.  Expect the Trojans to be right there at the end.

Bethlehem Catholic 24 Emmaus 21 – Another possible upset as Emmaus is better than their record and the Becahi Hawks better be careful not to overlook the Hornets.

North Allegheny 34 West Allegheny 14 – The Tigers stay unbeaten in slashing the Indians of West A.

Aliquippa 30 Keystone Oaks 11 – Aliquippa has the 6th best defense in PA and have an explosive offense too.  The Golden Eagles are KO’d by the Quips.

Wyomissing 38 Schuylkill Valley 23 – History says the Spartans sometimes struggle with the Panthers, but Coach Wolfrum of Wyomissing relishes a challenge.

Penns Valley 42 Tyrone 20 – The Rams led by Aaron Tobias have the #8 scoring offense, but the Golden Eagles battle and stay close for a while.

Garnet Valley 26 Strath Haven 20 – The Jaguars prove to be a little quicker and a little stronger than the Panthers in this cat fight.

Berlin Brothersvalley 23 Blacklick Valley 12 – Another Mountaineer victory, but the Vikings appear to be building towards a very dangerous team.

Slippery Rock 20 Oil City 14 – Upset Special.  Protime has consulted his crystal ball and it appears the Oilers lose their unbeaten season as the Rockets put on the afterburners to gain their triumph.

Troy 38 Athens 14 – Boy, does this hearken back to Greek Mythology and Homer’s ‘Iliad.’  The Trojans of Troy defeat the Wildcats of Athens in this battle.

Spring Ford 27 Perkiomen Valley 25 – This was a tough contest to pick.  The Rams won the coin toss over the Vikings.  Protime would like to see this one.

Warren 33 Franklin 28 – Another tough one to discern the victor.  If Ian Haynes were healthy, Protime would have gone with the Knights.  Instead, he’s going with the Dragons.