The year that just was, went by way too quickly.  It was a year of great games and great teams.  Protime saw quite a few individuals who will star in college and probably will take center stage on Sundays someday.  Protime traveled the most miles he’s ever traversed (2,572), except for the four years he journeyed to Indiana to witness the Hoosier State’s high school football championships at Lucas Oil Stadium.  He added four new venues to up his total to over 100.  He saw 11 new teams to up that all-time total to 298.  He’s now seen teams from 7 different states.  Obviously, Protime is no Sykotyk, who happens to be America’s number one high school football fan, but he loves high school football just the same.

He started out the season by going over the mountain to take in the DuBois Beavers at the Clearfield Bison.  The game ended in Clearfield’s favor 31-20, but was in doubt until most of the fourth quarter had elapsed.  Based on the way DuBois played and in talking with Clearfield coach Tim Janocko, the Beavers were expected to have a pretty good year and make the playoffs, not dismally digress into an 0-10 oblivion.

Week two found Protime returning to the same venue Friday night to witness the best regular season game he observed all year when the Penns Valley Rams fought their way back to tie Clearfield at 49 late in the last quarter.  Then with 7 seconds left, Bison sophomore QB Oliver Billotte scored from the one to win the game.  Billotte accounted for all eight Clearfield touchdowns by passing or carrying the ball himself.

Saturday Protime journeyed all the way to Catawissa to witness the Southern Columbia-Mount Carmel rivalry game.  What he saw was probably the best small high school football team he’s ever seen in the SCA Tigers as they absolutely mauled a very good Red Tornado team 48-0. 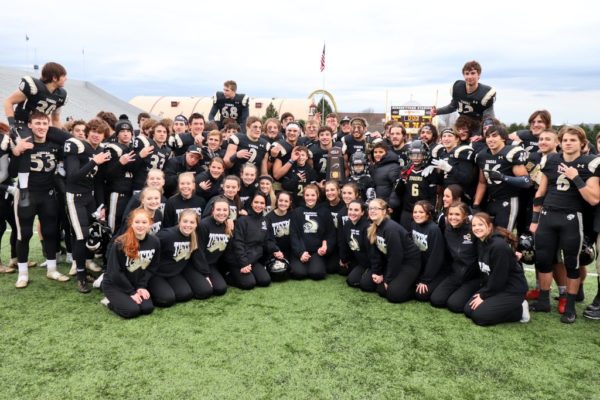 The 2019 number one small high school team in America, the Southern Columbia Tigers.

The third week found the ole prognosticator in Portage to watch the Mustangs, who were #1 in the state at one time in single A, trample a young Windber Rambler team 35-7.  Week four of PA high school football action took Protime to Brookville to see the Blue Raiders host the Clarion Bobcats.  Brookville’s star quarterback, Jack Krug, led the Raiders right down the field to a score and the early lead on their first possession, but then got hurt during the second drive and Clarion took charge from there to win 29-12.

After Protime had a week off to celebrate his 33rd year of matrimony to the lovely Mrs. P, he was the beholder of a very strange game.  DuBois led Erie’s Royals 20-13 at halftime only to be outscored 58-0 in the second half, which translates into a 71-20 defeat!  This was a microcosm of the Beaver season, never putting together four quarters except the Oil City game when DuBois lost 55-54 on a failed two-point conversion with no time left.  By the way, DuBois actually ended up winning the Erie game.  After the season, it was discovered that Erie had used an ineligible player and thus DuBois officially ended up 1-9.

The seventh week found Protime watching a decent Fort LeBoeuf Bisons squad hammer DuBois 42-14.  The following Friday was another game in Clearfield.  This time Bald Eagle Area’s Bald Eagles held off Clearfield for the 36-28 victory in a very entertaining contest.  A journey to Johnsonburg the 9th week of the season saw the Ridgway Elkers play a solid game in defeating Brookville 28-14.

A Friday trip to Blairsville the last week of the regular season got Protime some air time on the local radio as he was warmly welcomed into Bobcat Country.  They easily romped over Blacklick Valley’s Vikings 36-7 in a game that had playoff consequences for both teams.  Saturday was the ride over to Beaver Stadium for the first regular season high school football game ever played at Penn State.  It featured the Little Lions of St. College and the Eagles of Cumberland Valley.  CV looked strong early on, but SC ended up surging back for the 33-21 triumph.

The first week of playoffs was a journey with cousin Billy across the state to District 1 where Garnet Valley hosted Owen J. Roberts and Strath Haven hosted Upper Merion.  Cousin Billy saw the better game as Haven’s Panthers won 21-6 over the Vikings.  Protime’s game saw a very good GV Jaguar team clobber a decent OJR Wildcat eleven 43-0.  We met up with Willie McGonigle, our District 1 writer and hopefully, we made some new friends including Pennsylvania high school football historian and writer, Hal Wilson.  Saturday it was off to Harrisburg on the way home to see the Cougars handle Central York’s Panthers 47-14.

The next week was a triple-header of sorts.  Staying with Cousin Dave and catching up was a key to heading to Johnstown to take in one of the premier second round match-ups in the state, at least on paper, when the Penns Valley Rams butted heads with Richland’s Rams.  Valley’s QB Aaron Tobias set a new state record for TD passes in one year (54) by throwing for 3 scores.  But alas, the game was a dud because Richland was just that good that night in rolling to a 49-21 victory.  Richland’s sophomore sensation QB Kellan Stahl actually outplayed Tobias, and all-state WR Caleb Burke set a Richland single game record with 253 yards receiving.  In fact, in Protime’s humble opinion Richland was the second best AA team in PA. 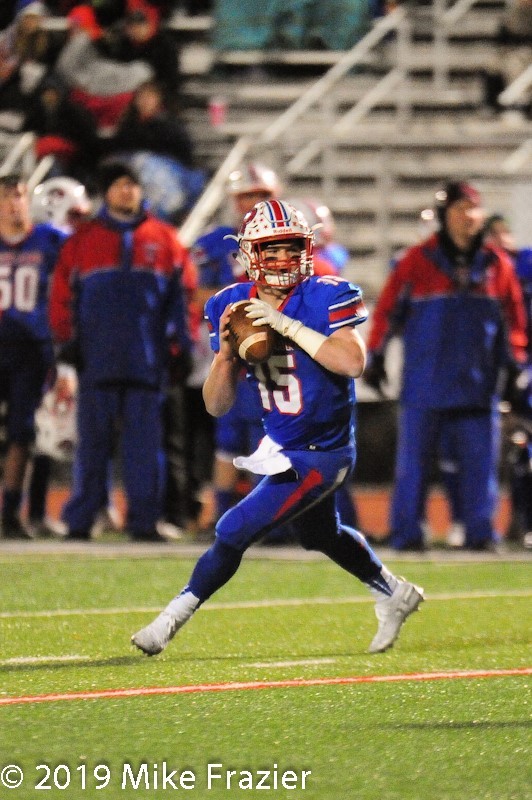 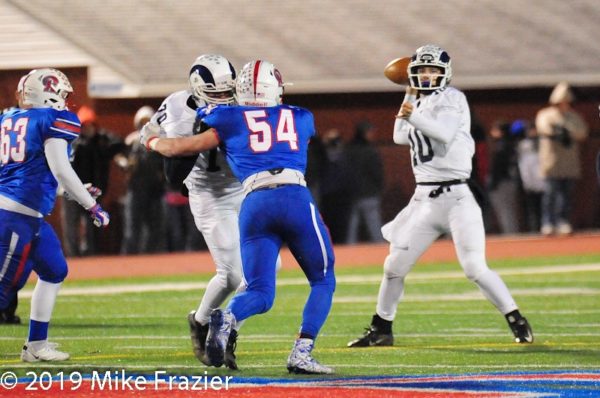 Saturday found Protime in DuBois to witness two great games.  In the first one Ridgway’s Elkers came away with a 34-27 hard-earned win over the Gremlins of Karns City.  The second game had Clarion’s Bobcats defeating the Kane Wolves 27-13 to set up a Ridgway-Clarion rematch of the regular season game won easily by the Elkers.

The next week’s prevailing winds sent Protime over to Clarion for the Erie Cathedral Prep-Bellefonte contest on Friday.  The Ramblers looked very strong in comfortably cruising by the Red Raiders 49-21.  Plus, it’s always a pleasure to chat with Coach Mischler of Erie Prep.  Saturday was a DH back in DuBois.  The Coudersport Falcons blew open a close game with Redbank Valley in the fourth quarter.  Trailing 7-6 to the Bulldogs heading into the final frame, Coudy scored 36 points to come away with the 42-13 win.  In the finale, Ridgway was too much for Clarion.  In a high scoring affair, the Elkers prevailed 56-35.

Protime was there when the Farrell Steelers shut out Coudy 28-0 in the fourth week of the playoffs.  The fifth playoff week, Protime took a trip to Huntingtown, Maryland as he was already in Annapolis visiting relatives for Thanksgiving.  Protime was privy to a real slobber-knocker between the #1 ranked Huntingtown Hurricanes and the perennial powerhouse Damascus Swarmin’ Hornets in the state 3A semi-final game.  Damascus broke the stalemate and won 21-14 on a fourth quarter TD toss.  One of the top three recruits in the country, 6’5” 290 lb. defensive end Brian Bresee (Clemson commit), plays for the Hornets and is a man among boys as they say.  By the way, the Swarmin’ Hornets won the state 3A championship tilt the following week.

Finally, Protime jollied on down to Hershey for the six PA state championships.  As you all know there were three tremendous games, nail-biters to the end.  The other three games involved teams, that in Protime’s opinion, may have been the best three teams in the state no matter what class.  In the end it was so worth the trip to witness three quality football teams in St. Joes Prep, Thomas Jefferson, and Southern Columbia, the likes of which just do not come around every year.  St. Joes ended up 16th in the country, Southern claimed the #1 small school in America honor, and TJ was absolutely phenomenal in their own right.

It was the first time in Protime’s 21 trips to state title games he saw three really good games.  Props to Farrell and their overtime win against Bishop Guilfoyle.  Brian Hilton Jr. not only blocked BG’s attempted field goal on OT, but he kicked the game-winning field goal to give the Steelers the 10-7 win.  Kudos to the Vikings of Archbishop Wood for their last second 19-15 triumph over newcomer Cheltenham.  The Panthers deserved a better fate.  Congrats to Wyoming Area and their 21-point fourth quarter outburst to reverse their 14-0 deficit to Central Valley and secure the 21-14 victory.  The Wyoming Warrior quarterback, Dom Deluca, definitely earned the gutsy performance of the weekend award.  As with Cheltenham, the Warriors of Central Valley played well enough to win. 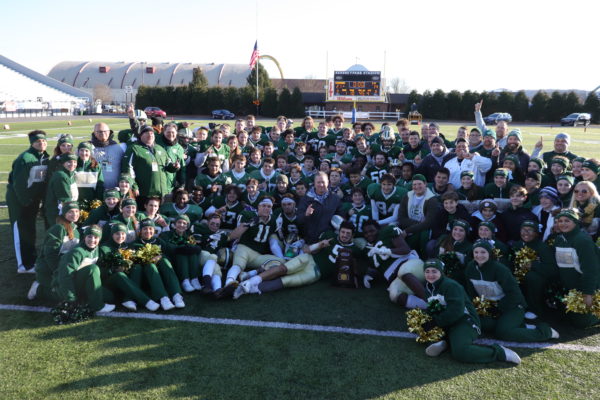 Your 2019 state 3A champs, the Wyoming Area Warriors

Protime also interviewed 5 coaches this year which was a pleasure and a privilege.  ‘Conversation with Coach’ was the title of each piece and the coaches interviewed in order were Tim Janocko (Clearfield), Jim Roth (Southern Columbia), John Franco (Tyrone), Bob Wolfrum (Wyomissing), and Mike Mischler (Erie Cathedral Prep).  What an intelligent, thoughtful, and pleasant group of coaches.  They all made time for Protime out of their busy schedules which in itself is impressive.  These five coaches have 1,507 wins among them and 157 years of experience as head honchos!  None plan to hang up the whistle in the near future, which is not good news for future opponents.  One side note is that Protime got a chance to talk briefly with Farrell’s former coach, Jarrett Samuels at states.  What a great human being and blessing Mr. Samuels is to all who come in contact with him.

Protime ended the year by correctly predicting 304 out of 380 games across the state, for an .800 accuracy rate.  He also predicted the exact score of a game Archbishop Wood-Gateway game and missed exact scores of several other games by a point or two!  He can’t wait for next season to begin.  Neither can Mrs. Protime as it appears she has already had enough of Protime’s off-season antics and corny humor.  Oh well, she’s the queen of the castle and Protime loves her very much.  Finally, Protime wants to wish everyone a Happy New Year.  He wishes good health to all and hopes to see you for the 2020 season.