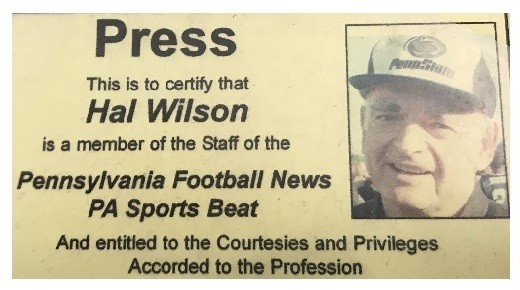 Hal Wilson.  Do you know that name?  If you are a high school football fan, especially in Pennsylvania, and are not familiar with that name, you are missing out on perhaps the biggest Keystone State high school football aficionado of all time.  Hal not only can recite scores of the games he has seen, but can name the coaches and the major players of most all the teams involved in those contests.

To top it all off, Hal is 90 years young and is still blessed with a brilliant mind.  He can also tell you fantastic tales about teams he never saw, almost like he’d actually been there.  Mr. Wilson can talk football like no other this author has ever run across.  In fact, our conversion for this article lasted over one and a half hours, but it seemed like only 15 or 20 minutes. 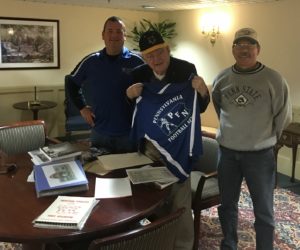 I first met Hal last November at his Delaware County independent living facility.  Billy Splain and I traveled to District 1 to cover a couple first round playoff games and Billy had set up a meeting with Hal prior to the Friday night contests.  We had a wonderful time talking with Hal and perusing the old clippings he had along with stories he has written over the years.  In addition, his brain is loaded with a plethora of high school football information dating back to the early part of the 20th century.

Many of the stories he writes are about teams.  You can find at least 16 of those stories in the archives of this website. (https://pafootballnews.com/great-pa-teams/)  They cover teams from the 1919 Harrisburg Tech powerhouse to the 2017 Pine-Richland state championship squad.  You will definitely get to know these elite teams after taking a gander at Hal’s well-researched masterpieces.  He is currently working toward doing articles on the 2019 Southern Columbia Tigers and the 2019 Thomas Jefferson Jaguars.

Back in the late 1930s, Hal cut his eyeteeth on high school football when he was eight years old.  That is when he attended his first game.  His mother liked football and saw that her son appeared to be interested after attending a game between Westinghouse and Rochester.  So, when Mt. Lebanon, who was undefeated, faced their arch rival, Dormont High she sent her son.  The Mt. Lebo eleven won 38-0 and Hal remembers saying to himself, “This is great.  I love this.”  He added. “I was hooked on high school football from then on.”

Hal grew up in Blue Devil country and still is an avid Mount Lebo alumnus.  He said he was too skinny and small to play football.  But he did run cross country and actually medaled in the WPIAL meet.  “In another meet, I finished second and ahead of Harold Betters, the famous jazz trombone player, who back then was quite a cross country runner,” Hal proudly declared.  Mr. Wilson graduated from Mt. Lebanon in 1947 and is a member of the Mt Lebo sports Hall of Fame.

He proceeded to major in engineering at The Pennsylvania State University.  During his time at PSU he enlisted in the ROTC.  After he graduated from college, he joined the Navy during the Korean Conflict.  Hal spent his first 2 years at sea.  Then, he became an instructor of electronics at the Naval Academy for the duration.  “I loved the Navy, but not as a career.  I wanted to get married and have kids,” Hal stated.  After leaving the Navy, he married his wife Lynn and they had 3 children, 2 girls and a boy.  By the way, Hal is a huge Penn State football fan, but we didn’t talk much Nittany Lion football that night.

Hal said he’s seen some really good players over the years, but he is not into writing about players as much as he loves to write about the teams he’s seen or has researched.  One of the players that came out in our conversation was Austin Scott, the running back for Parkland, who ran for 250 yards and scored 5 TDs in a 34-12 triumph over Woodland Hills in the 2002 state finals.  “He was one of the best 2 or 3 running backs I ever saw,” he commented.  “Another great running back and you have to go back to the 1919 Harrisburg Tech team was Carl Beck,” Hal added.  (Of course, Hal did not see him play.)

Wilson exclaimed that possibly the best running back duo was the ‘Deacon’ Dan Towler and Roscoe Ross tandem for the 1944 and 1945 Donora Dragons.  Hal believes Ross may be the best RB to come out of western Pennsylvania.  Speaking of Donora, Hal reminded me that they won the WPIAL both years in the largest classification which was AAA at the time.  In fact, according to Hal’s article on the now defunct Dragons, Donora (now Ringgold) was ranked #3 in the USA in 1945.  Hal added that in 1984 the Pittsburgh Press conducted a poll among sportswriters, fans, and coaches looking for the best teams in the past 50 years.  The 1945 Dragons were voted #1 by each group!  He regrets not being able to see them play though and wished that he had.

Hal went on to recite game after game that he witnessed including the 1941 WPIAL Championship game played at Jeannette’s McKee Stadium.  He saw his beloved Mt. Lebo team fall 7-0 to a very good Johnstown Trojan squad that included all-state tackle Larry Schellhammer.  He has photographs that shows the crowd of over 16,000 people who attended that game.

Not only is Hal a walking PFN history book, he has an extensive collection of memorabilia: 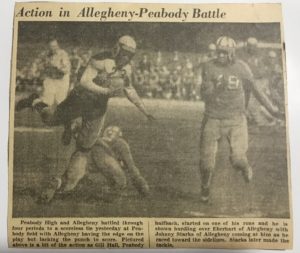 One of many clippings 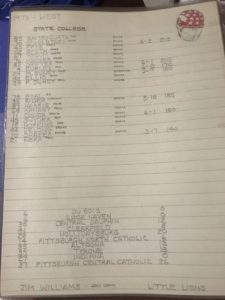 Hal has an extensive notebook 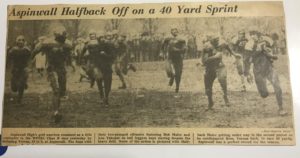 Another of his clippings 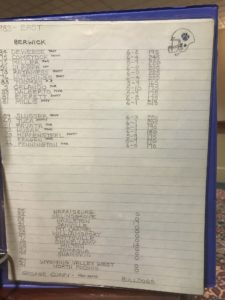 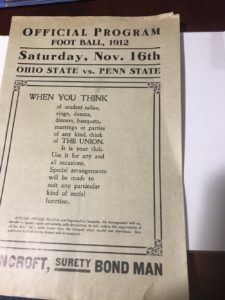 His prized piece, the only existing copy known of the first PSU/OSU game

Most of you know that Altoona and Johnstown had phenomenal teams back in the day.  Hal says that Windber, in 1942, handed each team their only loss of the season.  Windber never joined the WPIAL for whatever reason, but were named ‘mythical’ state champs.  The Ramblers were known as the ‘Coaltowners’ back then, but they traveled down east a few years so Hal thinks that may have had something to do with their eventual nickname change.  He recalls Windber trekking to Bethlehem in the 30s to take on the big bad Bethlehem Red Hurricanes (now Liberty) and beating them 76-12 because Bethlehem didn’t know how to defend the pass that Windber had perfected.

Hal fondly told some stories regarding German Township which is now Albert Gallatin and Redstone High School which is now Brownsville.  Wilson told me that Redstone’s QB, Fred Mazurek, beat out someone by the name of Joe Namath for 1st team all-state quarterback in 1960.  Mazurek was the starting QB for Redstone as a freshman and went on to quarterback at Pitt for 3 years.  He had a brief career as a wide receiver in the NFL.

Hal thinks that the peak of PA high school football was in the 40s, 50s, and 60s.  He has such an enormous amount of stories such as those previously mentioned that he could write a book.  This article could continue with each and every story Mr. Wilson told in just the hour and a half we spent on the phone, but those recited above were just an example of the knowledge this man has regarding high school football for probably the past 100 years.

Hal asserts that last year’s (2019) Southern Columbia team is definitely one of the best teams he has seen, albeit he only got to see them on TV.  He wonders how they would have matched up with St. Joes Prep and is curious if Coach Roth would have any thoughts on that.  He says the 1996 Downingtown team was great even though they lost the opener to Allentown Central Catholic.  The Whippets handed Woodland Hills a 49-14 loss in the AAAA finals.  Of course, he feels the 1981 Mt. Lebanon team was very good too and worthy of a mention.  As a side note, Hal tells the story of Donora’s quarterback, Lou ‘Bimbo’ Cecconi, feeling that their 1944 team was slightly better than the 1945 squad that gets all the credit.

I didn’t get to ask Hal everything I wanted because once I asked him a question, it was so interesting to have him take the ball and run with it so to speak.  I just sat back and listened, taking in all the information that was spilling out of his mind.  He told me to call back in a month so we could chat some more and maybe we’ll do a part two interview.

Everyone should pray that Hal can continue to stay healthy as he relayed to me that people have passed away at his independent living facility from the coronavirus.  On top of that, he is dealing with some major pain in his back.  I count it an honor and one of the highlights of my years associated with high school football to be able to meet and talk shop with Mr. Hal Wilson. 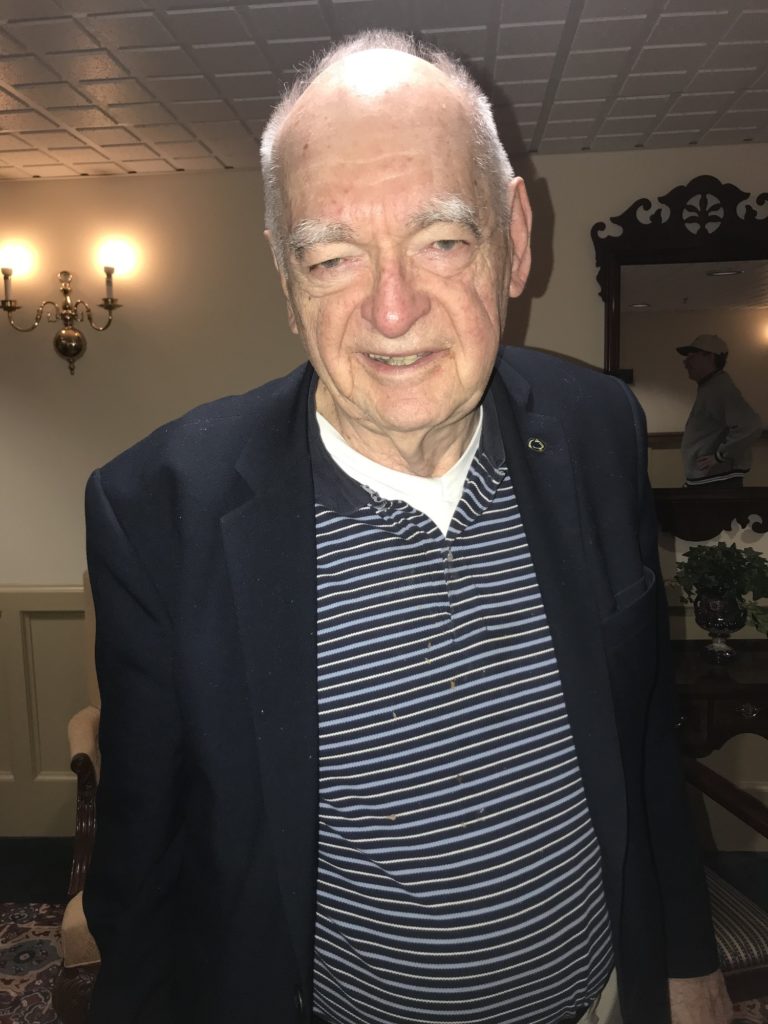