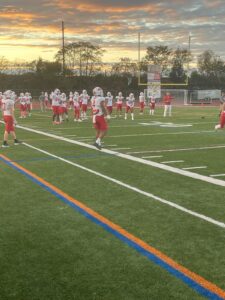 Jadyn Jones warming up against Hempfield

The District 3 Semifinals match-up in the 6A bracket features the Section Champs from both the YAIAA (Central York) and LL League (Wilson). The Panthers come into this game with a perfect record while the Bulldogs have won 6 in a row. It is a strength on strength match up with both teams bringing in fierce rushing attacks but also possessing stout defenses.

Wilson’s Jadyn Jones is quietly having a stellar Senior Season, will have to have a big game as the Panthers most certainly plan to be keying on him. Jones who just topped 1,000 rushing on the year, stopped to talk about that and a few other topics:


Carl Frederick: You have been a key piece in your squads winning streak, what has been the message from the Coaching staff after some early season struggles?
Jadyn Jones: The Coaching staff’s message to us players was continue to have a positive attitude in everything you do and to play for each other not yourself.

CF: What is your favorite play in your offense?
JJ: I don’t have one specific play that is my favorite but any run plays between the tackles

CF: Tell us more about where you are at in the recruiting process?
JJ: I am currently weighing my options between Navy, Sacred Heart and Saint Francis at the moment which have all offered me. Still in contact with other schools as well.

CF: Central York has one of the best defensive units in the state, what concerns you most about them?
JJ: They are very disciplined and fast defense which allows them to fly around and make plays.


As you can see Jones is aware Central York’s underrated defense will be coming after him. They are led by Carter Glassmyer at linebacker who is also starting to pick up FCS and FBS offers. The Senior Linebacker is among the state leaders in total tackles and is constantly around the football. How Wilson can slow down Beau Pribula and company could be another story as nobody really seems to have been able to so far. I have a feeling this will be an old school dog fight, looking forward to covering the game. For “scholarly” updates give me a follow @Carljfred.

My first season as a reporter/writer is coming to an end soon and watching this Columbia squad every week has been a true pleasure. Clinching their first section title in 19 years, the Crimson Tide fought all the way back from a 44-12 halftime deficit, to fall to the Pirates 58-48. Upper Dauphin had a good game plan in the first half keeping Robert Footman and company off the field and controlling the clock with their running game.

The Second half was a way different story as Footman once again put on a show passing for 536 yards and accounting for 7 total touchdowns. J’Von Collazo broke a state record in receiving yards (357) with 11 receptions and 5 touchdown receptions. Their combination was not quite enough as Upper Dauphin had built too much of lead and the Crimson Tide’s historic season came to an end.

Seven teams from the LL remain in the playoffs (MC, Donegal, Cocalico, Wilson, Hempfield, Warwick, LS) and they all will be in action this weekend.

The Barons coming off their bye week welcome the Exeter Township Eagles who took down South Western in their first round matchup. This is a dangerous matchup for Manheim Central as Exeter Township has played a tough schedule and their three losses were to title contenders Central York, Hempfield and Governor Mifflin. Judd Novak and company will look to keep their momentum going as they continue to rebound from last season’s disappointment. My partner Patrick Weider will be covering this battle. For updates follow him @footballcoach79.

The Black Knights are rolling after taking down Central Dauphin East 35-2! Many people would say Hempfield had the best team in Section 1 this year and it is starting to show. Cam Harbaugh continues to prove why many FCS schools are hot on his recruiting trail. The Cougars have 1 loss this season to Governor Mifflin (who else) and with a top-notch defense along with a strong running attack could be a significant challenge for the Black Knights.

Lampeter-Strasburg had a well-deserved bye last week as the number 2 seed in the 4A bracket. Their reward happens to be a Big Springs squad that won a shootout against Conrad Weiser. The Bulldogs are rolling offensively putting up 49 points in their victory last Friday. Scoring against the Pioneers defense has been a challenge for nearly every squad they have face this season, this will be a game that features two opposing strengths.


It will be a fun weekend with battles up and down District 3, looking forward to all of the action.