Cheltenham gets first win in over a year, defeating Father Judge 8-2

It had been nearly 16 months since Cheltenham had last won a football game, but that changed Friday night when they beat Father Judge 8-2. The last time the Panthers tasted victory was in the 5A state semi final game in 2019, when they defeated Cocalico 56-49. Cheltenham’s school district decided against playing any sports in the fall, so the Panthers wouldn’t be able to protect their District 1 5A championship. Cheltenham opted to play in the spring season with a completely different roster from the year before and the team had struggled to get it going. They lost their first two games against Truman 34-28 and Norristown 24-6. For much of the game against Judge it looked like Cheltenham would fall short yet again.

After an opening drive safety, where the ball was snapped over the punters head and two goal line stands by the Father Judge’s defense, it seemed like it wasn’t Cheltenham’s night, but that changed with around three minutes remaining. It was 4th and 21 from the Father Judge 42 yard line when Cheltenham quarterback Zach Gaffin dropped back to pass. He fired up a prayer to his fellow senior, running back Sam Sykes, who made an incredible catch over two Judge defenders. The 31 yard reception set up the next play in which Sykes ran in an 11 yard touchdown for the first of the night for either team with only two minutes remaining.

Unbelievable back to back plays by Sam Sykes. First he catches a deep pass by Gaffin on 4th and 21, then he finishes off the drive with a 11 yard TD run for the first TD of the game. Cheltenham leads 8-2 after the two point conversion @PaFootballNews pic.twitter.com/px8w2HeRJ1

Sykes has had back luck with injuries this season, rolling his ankle during a practice that took place in a parking lot thanks to the snow that was on the field at the time. Once he got back to full health and feeling like himself, Sykes suffered a concussion against Truman, which forced him to miss the Norristown game last week. Cheltenham head coach Ryan Nase was proud of the way his senior fought, “What he did tonight embodies everything about this program, we just battled, it’s not pretty, we’re not fancy, we’re just tough. We have tough kids and a program that battles back.”

Sykes explained how he was able to make the key plays at the end of the game, “I knew we needed a big play. I saw the ball and I knew I had to go get it. Basically I just tracked the ball, got up and high pointed it and I’m glad I was able to come down with it.” 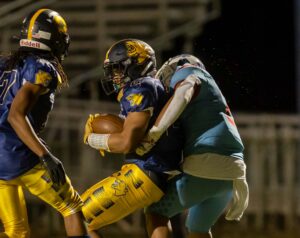 While up 8-2 with just over two minutes left in the game, Coach Nase was well aware of what could happen at the end of the game.“I’ll be honest with you, when we scored there late and got the two point conversion on the swinging gate with two minutes left, I got a little nervous because it felt just like the state championship game and that didn’t go so well for us.” In that state championship game against Archbishop Wood last year, Cheltenham scored a late touchdown to take the lead, but they were unable to stop Wood on their next possession. The Vikings scored a game winning touchdown with less than 10 seconds remaining winning the game 19-15. There was no heartbreaking finish for the Panthers this time as they were able to force a fumble on the ensuing kickoff and eventually ice the game.

It was senior night for Cheltenham and quarterback Zach Gaffin showed incredible toughness. Gaffin was physical all night, playing on both sides of the ball. He ran the ball a lot, providing Cheltenham with a bit of a spark on offense, on a night where scoring was very scarce and he was making tackles on the other side of the ball as a linebacker. “He’s been the heart and soul of this team for a long time. Every time during the recruiting process I told college coaches when they asked about him that there’s one thing you need to know. We had one captain in 2019 when we made that run and it was Zach Gaffin as a junior and tonight everyone knows why.” Nase explained. “He’s tough as nails” Sykes added. 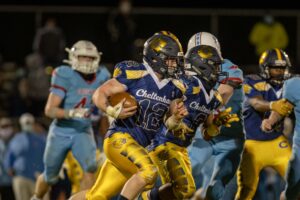 Amani Ezell was another senior who stepped up for Cheltenham. Like Gaffin, Ezell plays on both sides of the ball, coming up an interception in the second half as well as some key catches down the stretch.

There are no playoffs for the spring season, but Cheltenham will feel good about finally getting a win on the board. They’ll take their momentum into their final two games against Reading (0-1) and Penn Wood (2-0).