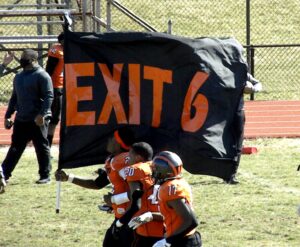 As expected, this game did not disappoint, as this was a hard hitting, grind it out type of game. To open the game, Chichester received the kickoff, and returned the ball to about the 40 yard line. On the first play, the Eagles QB Taylor connected with his wide receiver for about a 26 yard play and a first down. Eventually the Eagles drive would stall and Chester would get the ball on downs. Much of the same would be the story for much of the first quarter, at the end of the first quarter, there was no score. In the second quarter, both teams had moments again, but penalties and miscues would halt drives. Defense was a huge part of the game as both defenses wouldn’t break, until, midway thru the second quarter when the Clippers offense started to string together some big plays, quarterback Isaiah Freeman connected on a screen play for a huge gain, and then running back Aton Sterling, who ended the game with 18 carries for 105 yards broke one for about 17 yards to set up the Clippers only score of the game when Chester’s quarterback Isaiah Freeman who finished the game with 51 yards passing, and 1 touchdown, connected with Darron Miller for a 21 yard touchdown with 6:20 left in the first half, the missed extra point made the score 6 to 0, that would be the score at the half as well.

The Clippers received the second half kickoff, and would move the ball against the Eagles defense but would eventually stall….

More to the story will follow later this afternoon with photos and video!