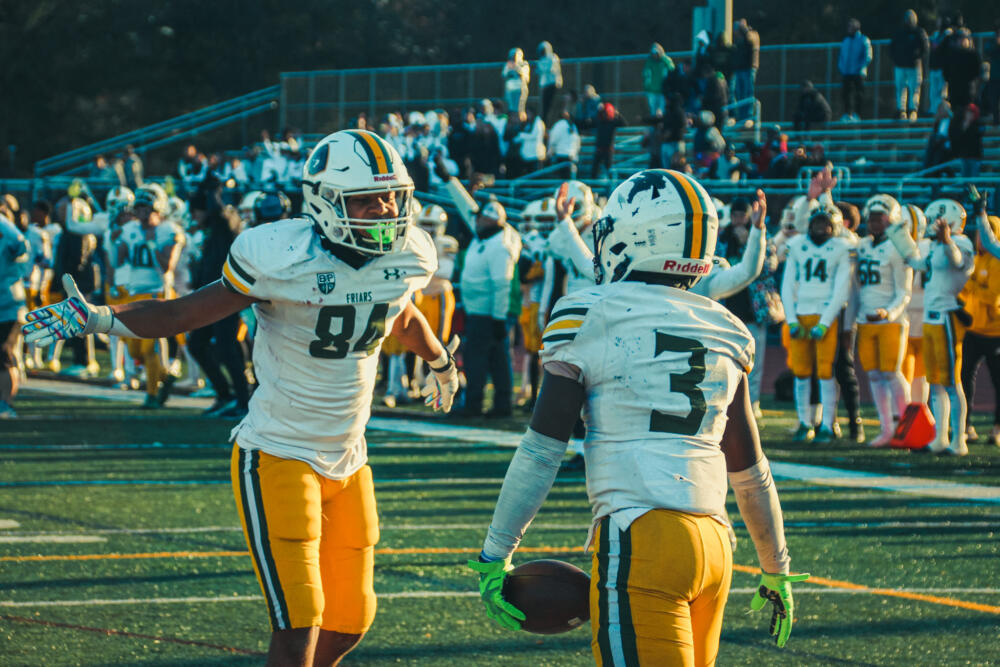 (Avery Hankey after his game-sealing TD, photo by Brendan Ricciardi)

FOLSOM PA – The sun beamed down, but it did not make it any warmer. A windy 40-degree afternoon was the setting for a state playoff matchup. A neutral site took away the chance for teams to have a home-field advantage. From across town, the Interboro Buccaneers had the hosting job, and they planned to keep their wheels turning and cruise through their school’s first state playoff game. The “visitors” of today’s battle, the Bonner-Prendie Friars, came ready to put the breaks on Interboro’s historic season. Interboro took the lead early, but Bonner held them to a scoreless second half and capped it with a 33-21 win.

The coin toss landed, Bonner won the toss. They elected to defer, and Inteboro sat ready to receive the opening kickoff. Interboro would come out shorthanded on their first drive with a three-and-out. Interboro would not sweat it, as they would stop Bonner on their drive to return the rock to them. Abu Kamara was cool, calm, and collected. He was ready to introduce himself to the crowd as he would break free and surfed down the sideline for a 69-yard touchdown. With a PAT to cap it off, Interboro took the upper hand early, 7-0.

After the scoring drive, only two minutes remained in the first quarter. Bonner and Interboro would drain each second off the clock, pushing the game to the second quarter.

No surprise here. Abu Kamara takes it 69-yards to the house for a TOUCHDOWN!! PAT good.

The second quarter would display why both teams were in the state playoffs. Interboro still held possession at the end of the first, so they kept the ball and flipped endzones. Sitting on their opponent’s 23-yard line, Abu Kamara would punch it in for yet another touchdown, and the kick would fly through the uprights. Interboro extended their lead to 14-0. Bonner knew they needed to tack something on of their own. A perfect combination of passing and rushing would get them there. Sat on the four, the ball was handed off to Isaiah Sessions for a touchdown. It would be one of many, creating a path to being a key piece in the come-from-behind win. Bonner slashed the lead to only one possession, 14-7.

No surprise here. Abu Kamara takes it 69-yards to the house for a TOUCHDOWN!! PAT good.

It took no time for Interboro to cancel out that score. On the third play of their drive, a pass by Julian Bulovas would find Abu Kamara. That was about 7-yards in the air, but Kamara is a YAC god. It would go 78-yards to the house for six. Interboro now reclaimed their 14 point lead, up 21-7. It would be the last time Inteboro found the endzone. Bonner prepared their two minute drill as the offense took the field. Halftime was closing in, and they were on their own side of the field. You could label it the “Shepherd Drive” as Justin Shepherd would handle every play. Pass, run, it did not matter. An untimed down would come from a Interboro penatly. Shepherd would flip one 7-yards that got hauled in by each team, but Bonner’s Zach Coneys would ultimately come down with it. It tossed six on the scoreboard, and they would ail no good on the 2pt attempt. Halftime appeared, the scoreboard read 21-13 Interboro.

78-yards to the house off a Bulovas pass.

When a game is this close in state playoffs, it is anyone’s game, but more specifically, who is hungrier.

Two time-consuming drives from both Bonner and Interboro would kick off the half. Both resulted in no score. The ball would be back in the hands of Bonner. Run after run, and only runs, Bonner’s Isaiah Session would again greet the endzone bringing the ball along with him. Bonner would go pass play for the 2pt attempt and convert it with a Shepherd, Coneys connection. It was all tied up heading into the fourth.

Bonner takes the first drive of the half for a TOUCHDOWN!! 2pt try is good.

Sessions ran in the TD
Coneys caught the 2pt

One quarter left, 12 minutes left, a chance to move on left. It was as if the game got a fresh start. No leads to hold or lose, it was all tied up; next, the longest drive of the game, with Bonner in possession. Avery Hankey would run the ball down Interboro’s throats. With roughly 40-yards on the drive he would set up Bonner on Interboro’s nine-yard line. The ball would stay on the ground, but Isaiah Session would take off and take flight. A touchdown is what both teams needed, but Bonner struck first. They took the lead for the first time in the game, now up 27-21. The rest of the game would be a Bonner masterclass as they perfected their defense and offense. Unable to capitalize on their crucial drive, Inteboro would punt after a three-and-out. Bonner got in a jam, it was a third and long. Convert, and they eliminated any chance of losing. Justin Shepherd slung a ball on a rope to complete a first-down pass. Hankey would cap off the drive with a rushing touchdown. Now up 33-21, they dissolved Inteboro’s playoff run.

Bonner’s Session takes it 9-yards for a TOUCHDOWN. PAT is wide right, no good.

Bonner, a team that is heavily overlooked compared to other catholic schools in D12 showed why they should not be. Coming back against a team who showed them they were not showing signs of stopping, shows resilience of Bonner.

Bonner’s Hankey said when asked about the mindset during the comeback, “game not over” which models the very words of Kobe Bryant.

His counterpart in the backfield, Isaiah Session, recently won MVP of the Catholic league while only a junior. His three-touchdown performance as well as his defensive contributions boosted this team to victory. He said, “when we was down 21-7 everyone telling me I recently won MVP, so I got to play like one…” That was exactly what he did.

Bonner moves on to play Crestwood in the 4A Semi-Finals, where one of them will get one step closer to a title game.