It’s not often you see a quarterback that’s 6-5, 250 pounds. That’s what I say to myself every time I say Clearfield play. Oliver Billotte is that QB.  That said, it’s his destructive force on defense that teams aspired to have in their programs.  Billotte had offers from several schools, but after a visit to Kent St for a game his decision was made.  He committed to the Golden Flash program on Friday. 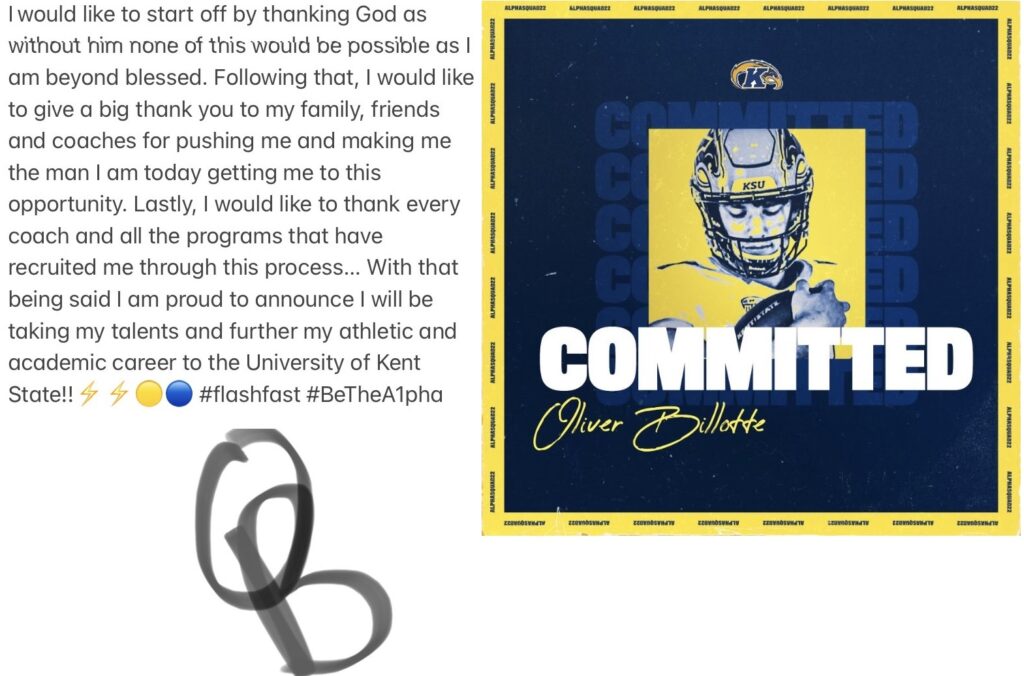 We caught up with Oliver to ask him about his decision:

PFN: Why did you choose to commit to Kent State?
Oliver: Love the school, area and campus… But most importantly I loved the energy from the team and the coaches; Felt like home!!

PFN: Who was your biggest influence there, who recruited you?
Oliver: Coach Makrinos and coach Ferrell

PFN: What are they getting in player like you?
Oliver: Someone that is willing to outwork everyone; willing to do what it takes!! Might not have the most talent on the field but has more then enough heart and guts!!

PFN: What was the recruiting process like for you?
Oliver: Stressful, slow and frustrating. But ending up being a extremely amazing experience and couldn’t have asked for a better ending!!

PFN: What position were you recruited for?
Oliver: Defensive Line

PFN: Do you know what you’d like to study?
Oliver: Exercise science

PFN: What role did your parents play in your decision?
Oliver: Support, they did a amazing job at allowing me to take my time and get me everywhere and let me take it all in!!

PFN: What do you think is the most exciting thing about the Golden Flash program?
Oliver: The mentality!!

PFN: What are you most looking forward to while playing for Kent St.?
Oliver: Being surrounded by alphas; everyone on the team was once a High school hero. This makes it very competitive and competition will be a major driver in my future growth as a athlete!!

PFN: Tell everyone out there in the football world something they’d never know about you until you told them:
Oliver: No one in my family has every played college football.

PFN: Who is the person who most influenced you in your football career?
Oliver: Myles Caragein

« Cardinals Too Much for Indians @UpperDublinFB @CRN_Football
State College comes up short, Cougars in control of Mid-Penn with 15-13 win @hbgcougarcoach »