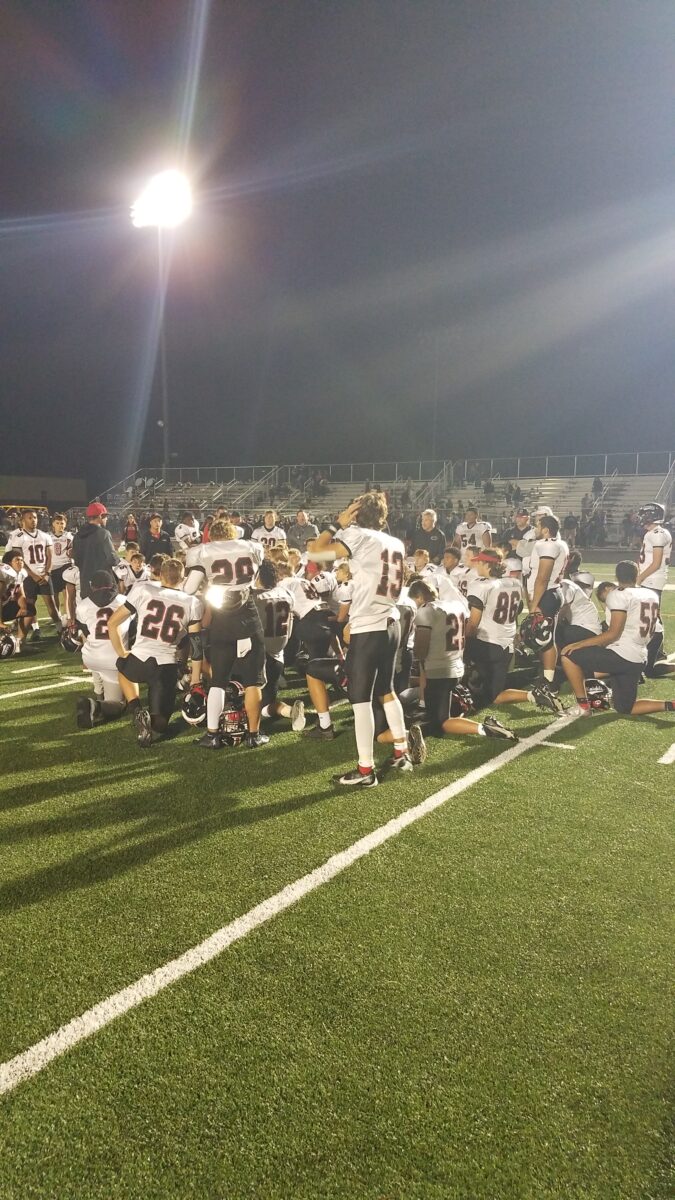 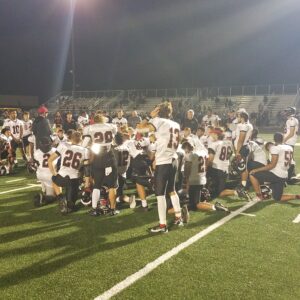 Hempfield Head Coach George Eager addressing his team after a 27-21 win over Warwick.

Hempfield beat Warwick Friday night 27-21 behind the rushing and throwing of QB Cam Harbaugh. Harbaugh rushed for 3 touchdowns and threw for a touchdown as well.  Harbaugh ran for tough yards all night for the Black Nights. Harbaugh rushed for 183 yards and threw for another 146 yards in the victory. In defeat, Jack Reed of Warwick threw for 3 touchdowns and 220 yards. Head Coach George Eager on the win”We knew this was going to be a fight. We our battled-tested going into section 1 after this victory. It was a gusty performance by our QB, Offensive Line, and the Defense”. Hempfield improved to 3-2 after this victory. Harbaugh on the win “Great win we got a winning record going into section play”.

It was a back and fourth 1st half by both teams. Warwick opened the scoring when Jack Reed hit Cooper Eckert for a 55-yard touchdown pass. Hempfield responded when Harbaugh hit Adam Acker with a 34-yard touchdown pass. Then Hempfield and Warwick both exchanged touchdowns and it appeared that Hempfield would trail 14-13 at the half, but Hempfield had 26 seconds left in the half and had other ideas.

Harbaugh scrambled and appeared to maybe cross the line of scrimmage but hit Andy Garcia for a 58-yard pass down to the Warwick 6 yard line. The only issue was Hempfield had only 6 seconds left in the half. Harbaugh on the crazy play”I just saw the play breakdown and saw the Wide Receiver open and he did the rest”.  So they once again went with Harbaugh running QB power and he rushed it in for a huge touchdown right at the end of the half. With this touchdown, Hempfield took a 20-14 lead, a lead they would never relinquish.  Eager on the end of half sequence “We wanted to be aggressive and give the ball to Cam Harbaugh. I had complete confidence in him that he would get in, but It could have backfired on us”.

After both teams exchanged fumbles in the second half. Hempfield was able to capitalize on a bad punt by Warwick and get the ball at the Warwick 34 yard line. Harbaugh finished the drive off with his 3rd and a final rushing touchdown. Hempfield took a commanding 27-14 lead with 5:21 left in the 3rd QT.

Things did get interesting at the end. Hempfield tried to kick a field goal and Nate Young blocked the field goal and Warwick returned to the Hempfield 45 yard line.  Warwick quickly scored when Reed hit Ryan Fink for a 30-yard touchdown. Suddenly the game was a one-possession game with 2:14 left, but Hempfield recovered the onside kick and ran the clock out to secure a 27-21 win. 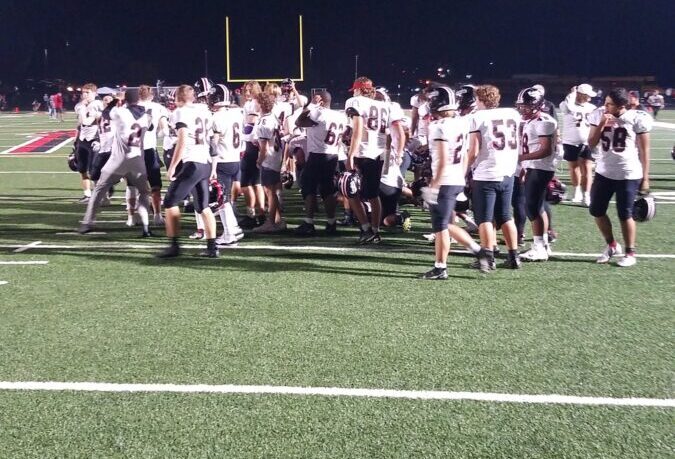 Hempfield players celebrating after a victory Friday night over Warwick.

Hempfield has had a challenging schedule with their only losses to undefeated Central York and Manheim Central. Eager on his team’s schedule so far “The schedule is a blessing and curse. We are physically feeling it after 5 weeks of football, but we feel prepared to play section 1 next week”. Harbaugh on the challenging schedule “We got a winning record and we are ready to compete for a section title”.  Coach Eager at the end of the interview had one more person he wanted to give credit for on the 3-2 start for the Black Nights “I want to give credit to my best friend and Defensive Coordinator Jay Ridinger, we wouldn’t be 3-2 if he wasn’t here”.