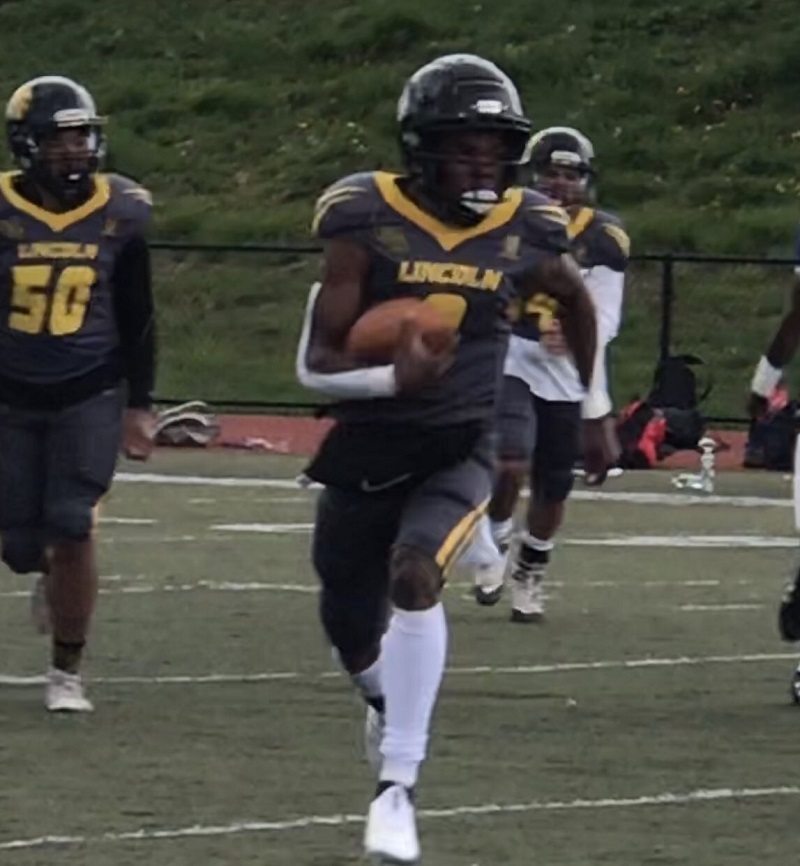 Khani Knight had a hand in all four Lincoln scores

With the sun starting the set on the spring football season, two things stood out today at Lincoln high school. Mother nature isn’t ready for us to actually believe it’s spring, and defense still wins games. Carrying a 7-0 lead into the fourth quarter, the Lincoln defense smothered the Electron offense, continually giving their offense great field position, allowing the Railsplitters to pull away for a 28-0 win on a very brisk, late fall like afternoon.

“I’m proud of our defense. They hung tough all game and every time they gave us great field position we took advantage” said Lincoln head coach Hakeem Cooper. But as good as the Lincoln defense was, quarterback Khani Knight wasn’t to be outshined.  The Sophomore signal caller scored all four td’s, running for one and throwing for the other three. Knight was 10-18-1 for 163 yards.  Xavier Irrzary hauled in 3 of those passes for 69 and two tds.

Both teams struggled for nearly the entire first half. Then with just under 2 minutes to play in the half, the Lincoln defense forced a fumble and Rasheem Lanier recovered the ball at the 43. Three plays later Knight found Kavon Walker from 24 yards out to put the Railsplitters on the board. The kick was good and Lincoln held a 7-0 lead at the break.

The second half didn’t start well for either team. Franklin punted from deep in their own territory but the kick netted -2 yards. Knight threw his only interception of the game. It was here that the Lincoln defense locked in. They forced another punt that had a net gain of -10 yards giving Knight and the offense the ball at the Electron 11. On fourth and two Knight carried the ball into the endzone making it a 15-0 game after the two point reception by Daniel Gardee just 10 seconds into the fourth.

Once again, the defense stepped up and gave the Railsplitters great field position at the Franklin 24. Knight found Xavier Irzarry from 24 yards out to put Lincoln up 21-0.

On the ensuing Franklin drive, Jayson Dawkins recovered another turnover by Franklin at the 40. Two plays later Kinght and Irzarry connected again for a 37 yard td to close out the scoring.

The Lincoln defense recorded 5 sacks and held the Electrons to just 109 total yards.

Ben Franklin (2-2) closes out the spring season next week with Central and Lincoln will look to extend their record to 5-1 against South Philadelphia.