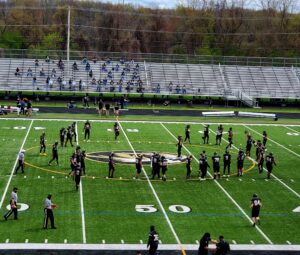 Truman came into Saturday afternoon’s matchup on the heels of defeat from Father Judge a week ago 37 to 14.  It didn’t take long for the Tigers to show they meant business this afternoon, when they received the opening kickoff and returned it to the Red Knights 26, 5 plays later, Sincere Thomas took the handoff, ran to the left, and then upfield for 25 yards and the score. The two point conversion try failed, and the score was 6 to 0 Tigers with 10:01 still to play in the first quarter.  After a few plays by the Red Knights, Reading’s quarterback pass was intercepted by #7 and returned 30 yards to the Red Knights 6 yard line, the next score came quickly when Tiger’s running back Coby Pena took the handoff and darted up the middle and powered his way into the endzone to extend the Tigers lead to 14 to 0 after the two point conversion was converted this time. Still in the first quarter, the Red Knights got the ball and unlike their first two possessions, this drive was a success when the Reading quarterback-#3 took the ball himself and ran 66 yards to the endzone to cut into the Tiger’s lead 14 to 6 with 7:22 still to play in the first quarter. Unfortunately for me, I was unable to start recording before the play took place.

After the Red Knight touchdown, Truman would get the ball and with the quickness, would turn the possession into more points when Sincere Thomas once again would take the handoff and scamper, twist and turn, not to be denied his second touchdown of the first quarter after the tough 30 yard touchdown run, a two point conversion would make the score 22 to 6 with 6:18 still to play in the …. first quarter.  The Tigers didn’t stop there though, on their next possession, Tigers QB Bradley threw a strike to #9 for about a 27 yard gain, and then on a fourth and about 14, Sophomore Bradley connected with his wide receiver Jordan Fant #13 for 27 yards and the score, extending the lead for Truman even more to 30 to 6, also the score at the end of the first quarter. First half scoring highlights shown below…

In the second quarter, as with in the first quarter, Reading’s offense couldn’t get much going and had to give the ball back to Truman.  A few plays later, QB Rondell Bradley scrambled free and connected with wide receiver #10 for 38 yards and the score, another two point conversion would make the score 38 to 6 Tigers leading the Red Knights with 9:39 left to play in the first half.  For Reading, on their next possession, the Red Knights got some offense going, marching down the field until the Tiger’s Jordan Fant intercepted another pass from Reading’s quarterback and was returned for a nice chunk of yards, only to have them yards walked off after a blind side block penalty called against them, would eventually have the ball spotted at the Tiger’s 20 yard line. On the next play, stud running back for Truman, Sincere Thomas took the handoff and cut, bounced his way inside, then again out towards the left sideline 80 yards for the score. That would be Thomas’s 3rd touchdown of the first half, and giving him around 215 yards on 8 carries… all in the first half ! The score at halftime would be Truman – 46, Reading – 6, Truman’s offense had accumulated over 340 yards of total offense in that first half.

To begin the second half of play, the MERCY RULE was in affect. As time quickly started to tick off the clock, both teams went back and fourth during the 3rd quarter, and with no points scored, we headed into the final quarter of play, Truman leading the Red Knights 46 to 6 still. In the 4th quarter, it wasn’t until about midway thru the final quarter, the offense of the Red Knights started to come together and get things going.  On the possession, Reading marched down the field, led by their QB Amier Burdine, and RB Elijah Williams, and with 4:43 left to play in the 4th quarter, Williams capped off the drive with a 3 yard run to the endzone and the score, a two point conversion would make the score 46 to 14.

Reading managed to get the ball back, and again, put together some plays by the quarterback Burdine, and with 1:04 left to play in the game, Burdine connected with WR #5 for 20 yards and the score, another successful two point conversion would make the score 46 to 22. Again, was unable to get the score on video ! You would’ve thought that would be the final score of the game right, think again as on the ensuing kickoff, guess who, Sincere Thomas would grab the squib kick at about 24 yard line and squeak his way through traffic and return it 76 yards for yet another touchdown, with just :52 seconds to play in the game, that was his 4th total TD of the game.

After the game, I had the pleasure of talking with both coaches, first up was with Truman head coach, Ben Johnson.  When I asked him what he thought of the game play by his Sophomore QB Bradley, he said… ” Bradley came out today, and did a fantastic job in his first start at QB at the Varsity level, he’s been ready, been getting reps with the JV team, and did well. ” Coach also stated that ” we’re excited about the win today, we finished 3-2, didn’t finish where we wanted to but guess what, next up… Chester… for the TITLE ! ” RB Sincere Thomas had nothing but great things to say about his O’line on how ” they do a great job blocking for me. “, Thomas also stated that ” it was good to be able to bounce back from a tough loss last week, that this was his last home game of his high school career as he is a senior so he had to go all out. ”  When I asked Sophomore QB Rondell Bradley how he felt he played today, being that this was his first start at the varsity level, he said, ” yeah… it was fun, for the most part, it was fun, and that the O’line was great, all game. ” Bradley also stated that if he’s needed next week to start the UNITED X Championship game… ” I’ll be ready ! ” When asking the Reading HC about the tough loss today, he said, ” its all the future, we got over 30 kids that are freshman, its great for us to get live play verse varsity players, take a few weeks off, get ready for fall. ” 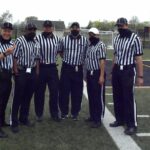 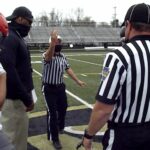 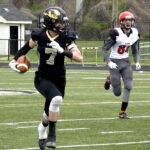 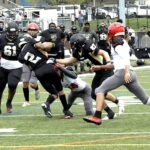 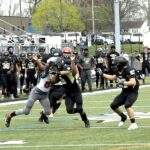 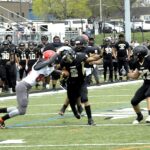 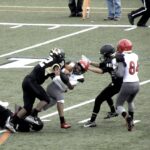 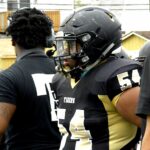 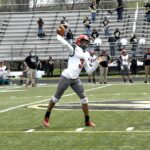 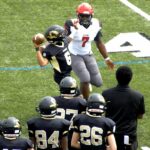 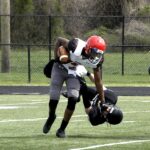 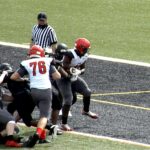 For FULL Extended Highlights Video, Check out the You Tube Channel at: 570Football at PAFootballNews