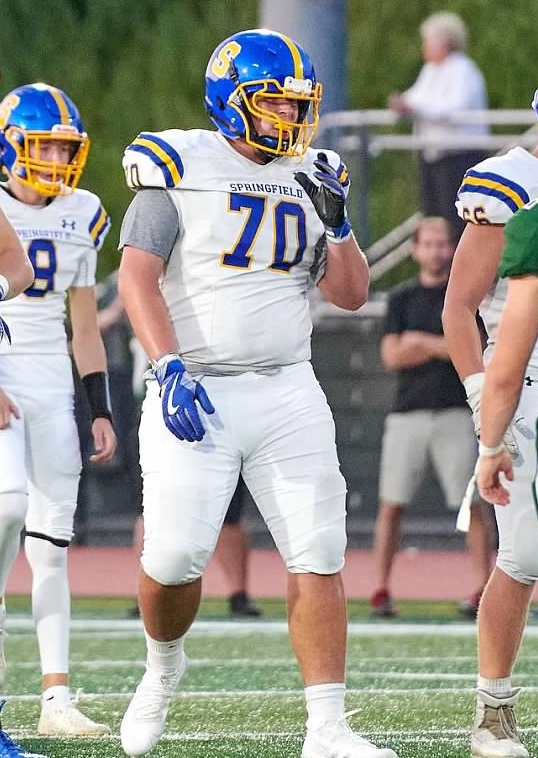 Why do you play football?
I play football because it’s the sport I love playing. I can’t really imagine my life without it. I started playing back in 2nd grade and I’ve played it every year since. It has been such an important part of my life and has helped develop me into the person I am today. I believe this sport really helps you mature and prepare you for the real world. Also, it is the only game where you can hit someone and not get in trouble for it. When I was much younger I played basketball and baseball but i’d get in trouble for contact, so those sports weren’t a good fit for me.

Who is your favorite sports star and why?
Fletcher Cox- Even though he’s a defensive lineman and I play offense, he’s a huge guy with great speed and strength and he can destroy anyone in his path.

Do you have a favorite play you remember the most? Explain:
In the Ridley game, one of their defensive ends was pass rushing me and he jumped and I pushed him while he was in the air and he went tumbling. It’s on my hudl highlights.

What are your goals for this coming season?
To have a successful season as a team and hopefully make district playoffs at least. If we could make it into the state playoffs, that’d be huge!

What stadium, HS/college/pro would you love to visit for a game?
I don’t follow Penn State a lot, but Beaver Stadium would definitely be the choice. Seems electrifying, especially during their white-out game.

What is your favorite Pro team, any sport?
I mainly watch college football, but when it comes to the Pros, it has to be the Eagles.

What game, yours, college or pro, was your favorite game and why?
It has to be Ridley. The first half was very slow for us. We only scored once and we let up 5 touchdowns. It was 28-7 at the half and we had to make major adjustments. We came out with our heads up and we knew we had to work as a team in order to win this game. We stopped their offensive series and we were able to tie it up. Unfortunately, Ridley ended up scoring with 2 minutes left and we lost 35-28. Moral of the story is that we were able to work as a team and we were able to come back and almost beat one of the best teams in the state in that year.

What cartoon character do you think your head coach most resembles.
Mr Incredible- He’s a great coach and teacher.

Name one thing that you’d love to do in football that may never happen?
Run the ball, especially up the middle or even outside. As a lineman I believe that this is the only possible answer, since we won’t ever get the ball and experience the glory of making touchdowns like receivers and running backs do.

Is there anyone in your family, besides your parents, you could consider your biggest fan? Who, Why?
My old neighbor, Mr. O’Leary, is always checking up on me and follows my athletic career very closely. He always asks how I am doing and how the team is looking, and I always update him with games and new PBs in track. He’s really a great person and I thank him for following me and motivating me.

When you aren’t playing, practicing or training for sports, what is your go to activity and why?
I lift/workout on my own time. I have a membership at LA Fitness and I’ve been lifting for the past 4 years. I also love sneakers and everything related to sneakers. I buy and resell sneakers as a side business, but I also have a big collection.

What is your favorite football memory to date?
Winning the CYO Del-Chesmont football championships in 8th grade. We struggled throughout the year and just barely made the playoffs, entering in at one of the lower seeds. But we made adjustments and started getting the ball rolling and we began to beat the higher seed teams and won the championship.

What scares you the most?
Bees and Hornets, they hurt so bad. Every time I see a bee I just avoid it because I just don’t even want to be near one

Music of choice:
Rock/Heavy Metal is my music of choice. It gets me fired up in the weightroom, but it also helps me sleep at night. My favorite Rock/Heavy metal bands consist of Black Sabbath, Judas Priest, Iron Maiden, Metallica, and Amon Amarth, among many others.

What was your favorite gift as a little boy? Why?
Probably my Public Enemy Big Ripper from SE Bikes. Basically, it was a big BMX bike. I rode this bike almost everyday throughout 7th and 8th grade. I lived on the bike and that bike has been through so much. I’ve taken a few trips to Philly with it and have rode down the Art Museum steps on it, which is a scary yet fascinating experience. All in all I’ve made many memories, both good and bad, on that bike that I can talk about to this day.

What restaurant is your go to when you need a big meal?
The best place In my area to get a big meal is none other than Big Daddyz Barbecue n’ Grill. I don’t typically go here, but when I do it fills me up every time. I order the buttermilk chicken bowl, which is composed of chicken tenders, potato wedges, mac n’ cheese, and cajun corn.

Which one? Sheetz or Wawa
I’ve only had Sheetz a few times, but I can say that Sheetz is easily better than Wawa. Sheetz just has way more stuff available and they give you more for lower prices. We need a couple of Sheetz in Delco.

What is your favorite vacation destination?
Its Disney World. I’ve gone there 5 times or so and it’s very beautiful. The place has so many things to do and it’s a perfect family vacation spot. I hope we’re able to return sometime soon.

Do you remember what the first football game you saw was?
Probably a Dallas Cowboys game. As a kid I was forced to believe that the Cowboys are good at football. Luckily as I got older I realized that the Cowboys are not so good and haven’t been good in years. Now I am an Eagles fan. Fly Eagles Fly.