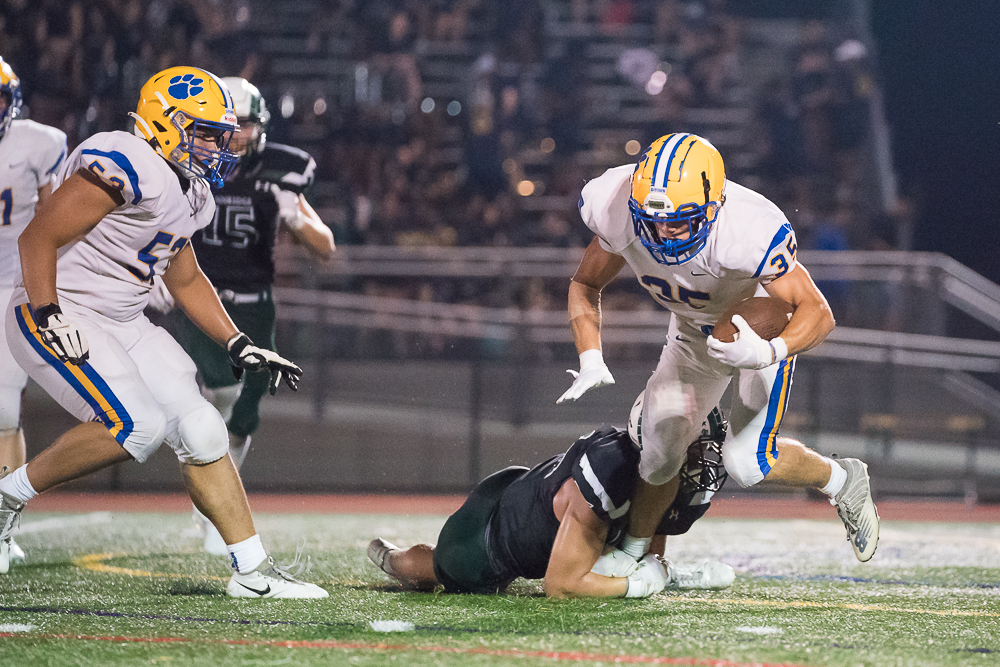 On a hot muggy August night with the stands full, the bands playing, cheerleaders leading the cheers, high school football with all of its pageantry had returned to Pennridge High School’s Helman Field. It did not take long for the Ram’s home crowd to explode as Adam Mossbrook took the season opening kickoff 85 yards untouched to the house. Coming off a COVID shortened season, with limited fans, that saw the Ram’s battle in the District 1 championship game, it only took 13 seconds to score, Sean Curry added the extra point for a 7-0 Pennridge lead. Unfortunately for the Ram faithful, a smothering Cougar defense would hold Pennridge scoreless for the next 47 minutes and 47 seconds, giving Downingtown a hard fought 14-7 opening night win.

The Cougar offense answered the Ram’s kickoff return with a 13 play 74 yard scoring drive of their own, to close the gap to 7-6. The Downingtown drive included a balanced mixture of a punishing power running attack, that is the trademark of Coach Michael Matta’s Cougars, with a blend of play action passes. Uncharacteristically for the Cougars, they attempted 24 passes with Junior lefty Jamy Jenkins completing 13, the Cougars also pounded out 173 yards on 48 rushes against a gritty Pennridge defense, led by Junior standout Phil Picciotti. The Ram’s defense forced 4 Cougar turnovers, ending several deep Cougar drives.

With time winding down in the first half the Pennridge defense held the Downingtown offense in the Ram’s territory, forcing a Cougar punt. Downingtown punter Harry Marks executed a perfect coffin corner kick, knocking the ball out at the Pennsridge 7 yard line. The attacking Cougar defense drove the Rams back to the 4 yard line, forcing a third and 13. Rams quarterback Xavier Dantzler, who was knocked around all night by the ferocious Cougar defense, threw a perfect out route to Tyler Fuchs, who was dropped immediately by safety Mike Waite, bringing up forth down. Dantzler, who doubles as the Ram’s punter, drove his punt to midfield. The Cougars Michael Giardino, sprung by a crafty block by Joe Kim, made a nifty return to the Pennridge 39, with 39 seconds to go in the half. From there Jenkins executed a perfect 4 play hurry up offense drive, first hitting two way standout “Sweet” Lou Rossetti on an 18 yard crossing route, followed by a strike to the swift C.J. Leo down the sideline. After an incompletion, Jenkins hit tight end George Bousum in the end zone, for what would be the final touchdown of the game, giving the Cougars a 14-7 halftime lead.

The second half, as was the case in the first half, featured a relentlessly attacking Cougar defense, led by a quick athletic set of linebackers, a rotating mix of brawn and speed on the D line and a secondary that covers extremely well, while quickly supporting the run. Even though they spent the majority of the second half on the field, the Downingtown defense limited the Ram’s offense to just 67 total yards for the contest. Seniors Sean Conlon and A.J. Lehman continuously created chaos on the edge of the Pennridge offense, sacking Dantzler several times for huge loses, cagey inside backers Jose Datil, Sam Barton and Jackson Noble flowed across the field plugging gaps, the rotation of the wiry Chad Lovenguth, speedy Aiden Nicholson and George Bousum seemed to beat the pulling guards to the play, while nose tackles Rossetti, Connor Kelly and Dante D’Addezio proved immoveable. The Cougar secondary, led by safety Mike Waite limited the Ram’s passing attack to 37 yards on 3-13-1 passing, with Waite grabbing the interception, first time starting Senior defensive backs Brady Dennis, Duke Hetherington and Liam Fowler threw a blanket over the Rams receivers.

The Rams will host  Suburban One rival Pennsbury next week, while the Cougars will travel to State College to take on the Little Lions.

Captains meet for the coin toss.