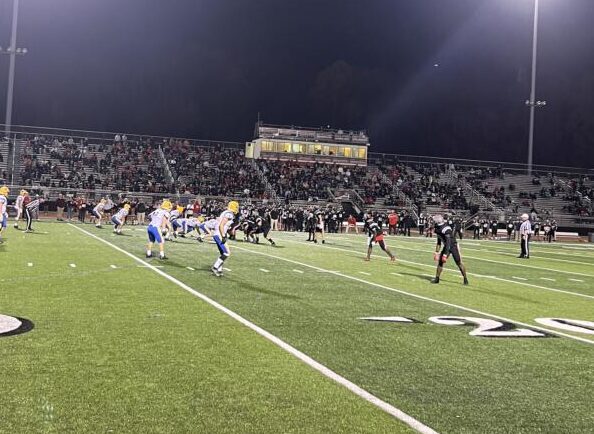 The last time these two teams played each other, Coatesville came out on top with a 14 to 10 victory in the regular season. But now it’s the playoffs, so it`s win or go home. Unfortunately, the idea of a clean sweep against East this season did not go as planned. Downingtown East upset #2 Coatesville in a dominant 31-15 win to move to the second round of the playoffs.

The first quarter started off very slow offensively because both teams showed their defensive toughness, not allowing either side to gain the upper hand. Downingtown East stuck with their traditional hard nose running and Coatesville used their dangerous play action passes throughout. It wasn’t until 1:29 Left in the first quarter that Coatesville was able to put up six points with an outside sweep to running back Spencer Ferguson to lead this ball game. Downingtown East was unable to do anything effective in the first quarter and even was hit with a safety that had them down 8-0.

Coatsville scores on an outside sweep to #9 Spencer Ferguson with 1:29 left in the first quarter. pic.twitter.com/9vciGGxzCj

The second quarter involved much more action from both offenses. Coatesville scored again to put them up 15 to nothing with around 3:30 left before halftime. This is the point in time where the game took a complete shift in momentum. Downingtown East number one weapon, running back Bo Horvath, rushed for two touchdowns to close the half and tie the game up 15-15.

Bo Horvat with a 36 yard run and two point conversion attempt to Tie the game up 15 15 07 seconds left in the first half. pic.twitter.com/gNTmAQyJrf

The third quarter was a defensive clinic by East. Coatesville started the second half off by turning the ball over on a forced fumble by cornerback Jack Basilli. Then with 3:50 left in the third, Downingtown East forces a safety on Coatesville putting them up 17-15. And with 38 seconds left in the third quarterback Jamie Jenkins threw a touchdown to put Downingtown East up 24 to 15 at the end of the quarter.

Coatesville had multiple chances to make this game close in the fourth quarter but unfortunately they just couldn’t convert on 3rd down attempts.  Also, no one on the Coatesville defense or coaching staff had an answer for how to stop Bo Horvath from running all over this team. With about 6 minutes left in the game, Horvath ran for an almost 80-yard touchdown put his team up 31 to 15. Then Michael Leo sealed the game for the Cougars with an interception at around the four-minute mark.