Haverford Fights Back in the Second Half, beating Conestoga 27-14 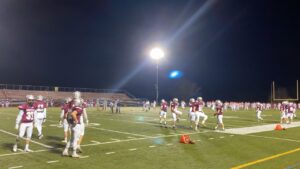 Haverford and Conestoga were both ready for this huge Central League matchup with big time playoff implications. Haverford had only given up 3 points all season, and they were eager to continue their great defensive record against a strong Conestoga team.

The teams started off hot on their first drives however, both teams had a turnover on downs deep in the other team’s territory.  Haverford started to put together a nice drive, and it ended with Tommy Wright finding TE Chris Dempsey for 6. The extra point made it 7-0 Haverford. The first quarter ended soon after that, as both teams were using the ground game to their benefit early on with Jimmy Wright of Haverford and James Condi of Conestoga.

The second quarter started off with a bang for Haverford as Michael Costigan missed Peter Detwiler and found Casey Gilroy of Haverford who took the ball 35 yards untouched for a pick six to give Haverford a 14-0 lead and many thought that Haverford was about to take control like they had in their past games. Conestoga was eager to bounce back and got the spark they needed on a play near midfield that looked broken to start, but Michael Costigan did what he is best at and made something out of nothing, catching Haverford falling asleep on defense and running for a 49 yard touchdown. DJ Penske missed the PAT, and the Fords lead was cut to 8 points. Late in the quarter, Conestoga recovered a fumble in Haverford territory after Tommy Wright lost the ball on a QB run. Conestoga put a couple nice plays together and concluded the drive with a 7-yard touchdown run from Costigan. Costigan found Peter Detwiler for the two-point conversion and tied up the game right before halftime at 14 and Conestoga had all the momentum going into the second half.

Conestoga got the ball to start the second half and had a three and out with multiple costly penalties.  On the ensuing drive Haverford marched down the field, ending the drive with a 7-yard touchdown pass from Tommy Wright to fullback Will Higson. The Fords went for 2 and couldn’t convert leaving the score at 20-14. Conestoga looked to bounce back but Costigan threw an interception to Tommy Caruso of Haverford. Then came the feed Jimmy Wright drive which ended in a 16-yard Wright TD. Haverford took a 27-14 lead and held on defensively for the rest of the game to make 27-14 the final score.

Haverford remains undefeated while Conestoga drops to 1-3. Conestoga coach Matt Diamond said after the game that he was “proud of the physicality and how hard our kids played.” Conestoga assistant Sonny Dimartini said “We’ll fix it up for a big game against Upper Darby.” As Dimartini said, the Pioneers go on the road next Friday night to take on Upper Darby, while Haverford hosts Garnet Valley in the battle of two undefeated teams.