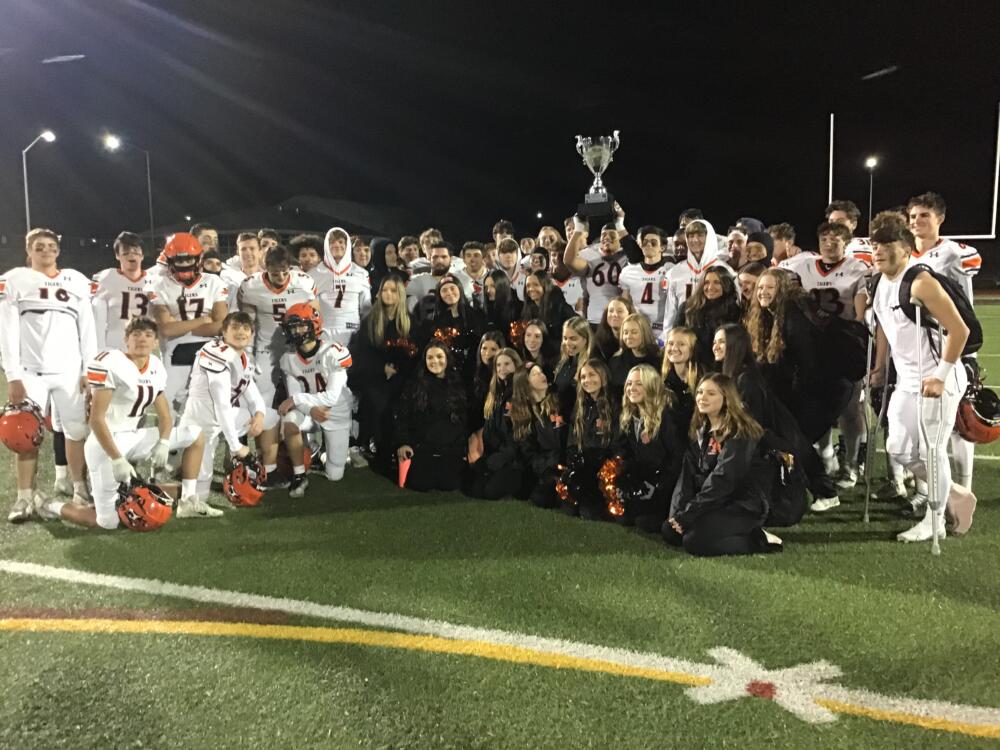 MIDDLETOWN: Chris Gicking lives and breathes all things Marple and Marple Newtown school district. It was at Marple where he threw for 5897 yards in his high school career and where his name can be found either in first or second place when you look at the school’s record book for all passing stat categories.

It’s at Marple Township Little League, where he spends his spring and summer coaching youth baseball. And after his Tigers rallied from a 28-7 second-quarter deficit to win 32-28 over the Penncrest Lions, Coach Gicking now has the most wins in school history. Wednesday’s victory brought his win total up to 66, which broke a tie with Ray Gionta. 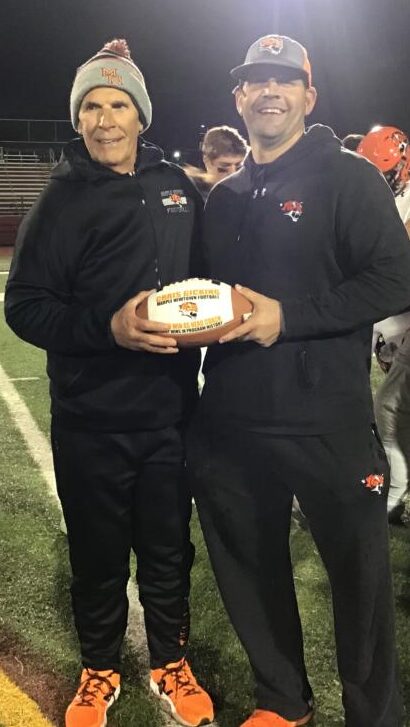 But don’t tell him that it’s a personal record because he’ll tell you otherwise “It’s a program award, it’s the guys that played tonight it’s these guys who came home tonight from playing college football, it’s the guys before them it’s all of them. Gicking said adding “It’s all the players and coaches and while you’re at it you got to talk about our community and administration support.”

“Winning games is hard, you can’t win games unless you have support from your community and a great coaching staff and great players which we have.” Gicking said adding that “Really it comes down to three things great community, great coaches, and great players, that’s what it is.

While Gicking is quick to spread the credit to others, sophomore running back Brain Box says otherwise “It’s great it’s all coach though it’s the whole coaching staff.” Box added, “I love Coach Gick, he’s awesome.”

It was Box who played a huge role in the comeback for the Tigers scoring three touchdowns in the game including two in the second half.

Entering the game the Lions, haven’t seen game action since October 28th and they didn’t show any signs of rust taking the opening kickoff and marching 67-yards on six plays including a 26 run from Matt Ferry on the first play from scrimmage but it was Sean O’Donnell who found the endzone first for the Lions with a one-yard sneak.

On the Tiger’s first play from scrimmage, Ferry stopped Box for a loss of two yards and that seem to set the tone early for the Lion’s defense, forcing the Tigers to punt after three plays. On their second play of the ensuing drive, the Lions extended their lead to 14 with O’Donnell taking to the air and finding Kolby Poole for a 45-yard touchdown.

On the ensuing play from scrimmage, Coach Gicking reached into his bag of tricks and came out with running back Paul Defruscio hitting a wide-open Joey Yukenavitch for a 60-yard touchdown, but the extra point missed and the Lions still had the 14-7 lead.

The Lions responded on their next drive going 65 yards on five plays before O’Donnell kept the ball on an option, and took it seven yards making it 21-7.

Nico Tozzi extended the Lions’ lead to 28-7 with his 36-yard touchdown run up the gut of Tiger’s defense. In total, the Lions’ offense amassed 250 (245 rushing) of their 353 (301 rushings) in the game’s first half. That drew praise from Gicking who said, “Penncrest has gotten better each week, I was telling [Lion’s head] Coach [Paul] Graham and [Lions defensive coordinator] Coach [Jeff] Allison they have done a great job, that’s a different team than we played in week two (Tigers won that game 37-6) and I told our kids that.”

The Tigers cut the deficit to 28-13 with a two-yard touchdown run by Lou Diluzio.

On the ensuing Lions drive they failed to convert on a fourth down at the Tigers’ 40 and the Tigers took over and made it a one-score game, after a defensive holding call wiped out a Lions sack, David Bertoline found an open Box along the Lions’ sideline for a 34-yard touchdown. Making it 28-20 Penncrest at the half.

The Tigers took advantage of the Lions giving them a short field via squib kick going 50 yards on eight plays before Box found the endzone from six yards out. The Tigers went to tie the game up but Bertoline’s pass fell incomplete and the Lions held on for the 28-26 lead.

On the ensuing drive, the Lion’s appeared poised to extend their lead getting down to the Tiger’s 7-yard line before turning the ball over on downs. From there the Tigers went on an 11-play 96-yard drive that was capped by Box’s third touchdown on the evening this one from 26 yards. For the game Box finished with 81 yards on 12 carries with 62 of those yards coming in the second half.

The Lions were able to put one more drive together driving down to the Tigers 6-yard line with under two minutes to play before turning the ball over on downs allowing the Tigers to take the knee and run out the clock.