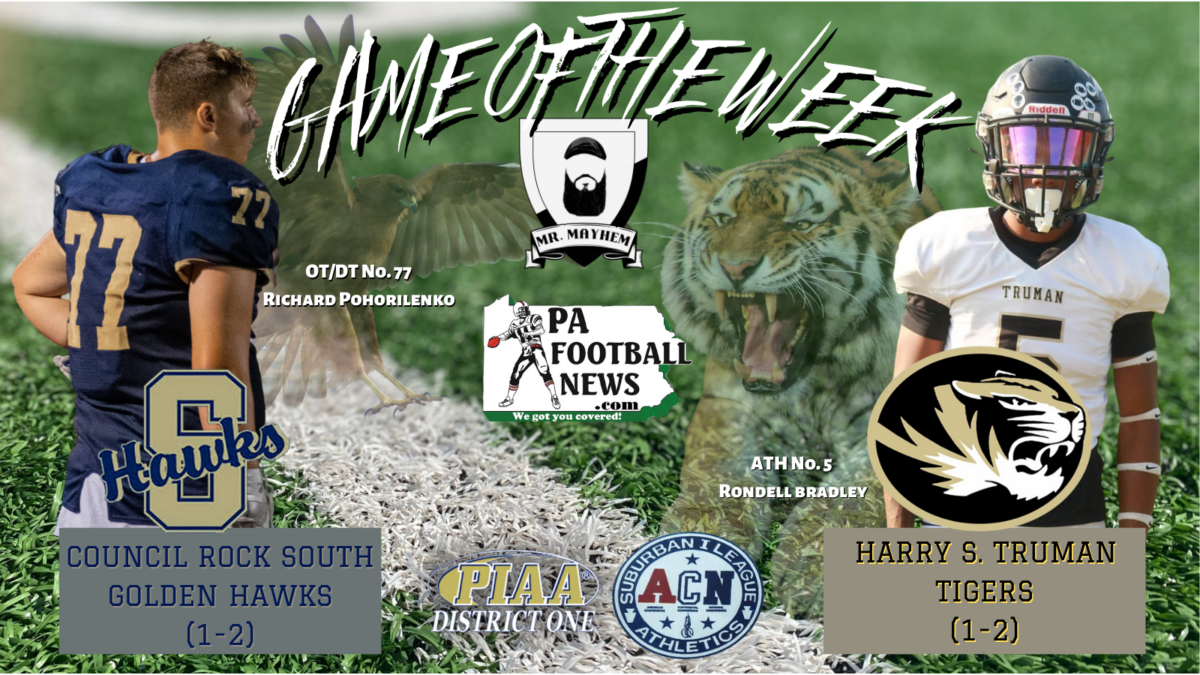 Mayhem’s Game of the Week

Under first year head coach CJ Szydlik (4 seasons at UM previously) the Golden Hawks started the season off with a 21-7 win against non-conference opponent William Tennent that saw junior running back Chase Myers rush for 126 yards & 2 TDs. The following week they lost a tough one to Neshaminy 21-7. Last week saw Pennsbury blow them out 41-6. Both sides of the ball have been inconsistent.  I expect the Golden Hawks to step up on offense this week as they are matched up against a Tigers defense yielding 28.7 pts per contest.  Look for this game to be a battle. When asked about what the key to victory this week was, Senior OT/DT No.77 Richard Pohorilenko says, “In order to win this week, we have to play as a team, and it starts up front with the o line. After last week we’re going to see what we’re made of and see how we respond to adversity.”

Ben Johnson (4th season) and his Tigers took down non-conference opponent Chichester out of the Delaware Valley League 19-2 in week zero but has since lost two in a row. The following week the Tigers took on Central Bucks South and lost 35-8. Last week Abington dominated them 49-7.  This team has been inconsistent offensively and defensively. They are facing a Golden Hawk team who is giving up 23 points per contest. This game should be a battle in the trenches for sure.  I caught up with Senior Athlete No. 5 Rondell Bradley this week and asked him what the key to victory would be and he said, “The key for us to beat Council Rock South is one thing and that is consistency.”

Mayhem’s Prediction: CR South and Truman go back and forth in a nailbiter.