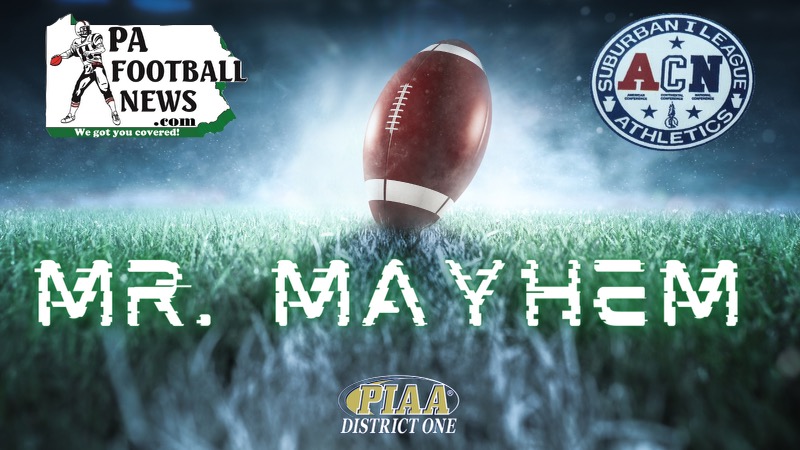 Year one is in the books and let me tell you, I had a blast! I got to experience some really good games, meet some amazing student athletes, and be a part of some great school community atmosphere’s. One of my favorite things to do after the season is to go over the hours of footage I took and figure out which ones stood out the most.  After hours of film study I was able to compile  my Top 10 plays from the Suburban One League (SOL) regular season on defense.  Make sure to scroll down to the bottom for the video.

HM: No.10 sophomore free safety Cooper Taylor of CB West with the interception!

10: No.52 senior defensive lineman Braden Kotter of Council Rock South with a huge tackle for loss!

9: No.43 junior linebacker Dylan O’Brien of Pennridge with a pick six!!!

8: No.57 junior defensive Landon Moyer from Pennridge of the edge with a huge sack!

7: No.7 senior linebacker Alex Rivera from Bensalem with the one arm sack!

6: No.10 senior linebacker Owen Dunlevy of Upper Moreland bust through for the sack!

5: No.9 senior defensive back Cole Tucker from Upper Moreland comes out of nowhere for the interception!

4: No.2 junior defensive back Djevanni Cerisier of Upper Dublin with a falling interception to seal the victory.

3: Huge Stop by the entire defensive unit on 4th& goal from the 1-yard line!!! Four consecutive stops in a row. Woah!!!

2: No.55 junior defensive end Aden Roe of Council Rock North with the monster sack after a nice spin move.

1: No.43 junior linebacker Dylan O’Brien from Pennridge with the ONE HAND INTERCEPTION!!! Great coverage and read!!!