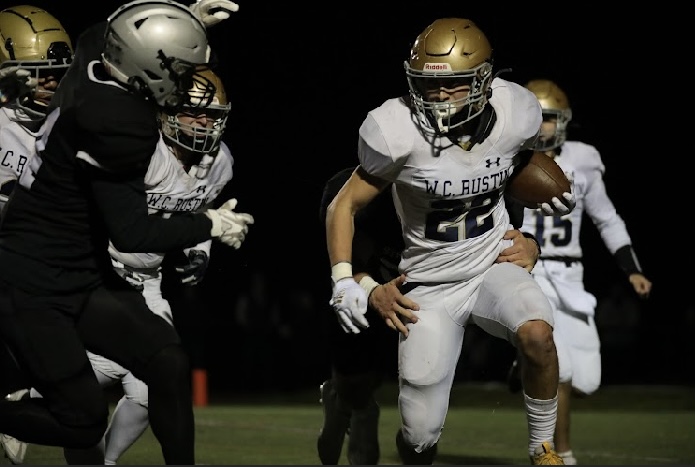 Rustin rewrites the script, advances to District 1 5A Championship with revenge win over Strath Haven

WALLINGFORD, Pa. — After a heartbreaking loss in the District 1 5A Championship to Strath Haven on a two-point conversion in 2021, it was Rustin that made the play of the season this time around as they stopped history from repeating in a thrilling 28-27 overtime win.

The game started out just about as good as Rustin could have asked for, as Nelson Murray took the opening kickoff 92 yards to the house to send an early message for the Golden Knights. Strath Haven’s Sam Milligan blocked the extra point, but it was still a 6-0 Rustin lead right out of the gate.

Rustin makes a statement early as Nelson Murray takes the opening kick 92 yards to the house.

After a quick three-and-out from the Strath Haven offense, Rustin kept the momentum and ran with it. Chase Hatton would not be denied for Rustin, as he powered his way through the Panther defense for 30 yards and a 13-0 lead for Rustin.

Rustin’s Chase Hatton lowers the shoulder and bulls his way in for a 30-yard touchdown run.

Extra point is good and the Golden Knights lead 13-0 on the road at Strath Haven @PaFootballNews pic.twitter.com/arDsyer480

It was a quiet crowd in Wallingford after that drive, but the Panther faithful would not stay somber for long.

Needing points in a big way, Sam Milligan found Anthony Crawford for a circus catch on 4th down to keep the Haven drive alive. They continued to march down the field, and Crawford would punch it in from the one yard line. Crawford broke the single-season rushing record for the Panthers in 2022, and he added 196 more on the ground tonight.

Rustin would quickly punt the ball back to Haven, and the momentum started to look like it was wearing black and white. The Panthers were marching down the field and appeared like they were set to take the lead, but Rustin forced a fumble and recovered at their own two yard line.

That would only delay the inevitable, however, as Rustin went three-and-out and gave Strath Haven the ball back in great field position. With time dwindling in the first half, Strath Haven was driving with the chance to change the tone of the locker room at halftime.

Change the tone they did, as Bob Fooskas leaped his way into the end zone with just six seconds left in the first half to give Strath Haven a 14-13 lead after two quarters.

We have an all-time classic brewing here between Strath Haven and Rustin once again, as Bob Fooskas scores with six seconds left in the half to give Strath Haven a 14-13 lead @PaFootballNews pic.twitter.com/8CiO94mDaP

It was no surprise after the 34-33 Triple-OT thriller from last season that these teams were neck and neck once again.

In classic Kevin Clancy style, Strath Haven began the second half with a seven minute drive. Unfortunately for the Panthers, it resulted in nothing but momentum for the Golden Knights instead.

That stop allowed Rustin to keep the game within a score and look to get back on top after they led for most of the first half. Rustin fired back with a long drive of their own, and Daimon Jacobs finished it off with a touchdown run and a massive reception on the ensuing two-point conversion to make it a seven point game as opposed to five.

RUSTIN IS BACK ON TOP!

Daimon Jacobs with the run this time, and the Golden Knights reclaim the lead at 19-14.

What a catch by Rustin’s Daimon Jacobs, as he secures the two-point conversion to put Rustin ahead 21-14.

It appears that the flex by Jacobs afterwards may have pushed Rustin’s kick back 15 yards pic.twitter.com/yJ3QFOZDBe

If that name sounds familiar, it would be because Daimon’s older brother, Dayshawn, was the starting running back for the Rustin team who fell to Strath Haven last season and is now at West Chester University.

“The ball was in the air on that two-point conversion, and I knew I had to just go up and make a play for us,” Jacobs said. “We had a lot of seniors from last year come out tonight and Dayshawn was the main running back last year, so we wanted to come in here and do it all for them.”

It appeared as though the game was turned upside down after Strath Haven promptly took the kickoff back for a touchdown, but it was called back due to a holding penalty. Austin Conner didn’t seem to be bothered in the slightest, as he ripped off a 58-yard touchdown run to tie the game back up anyway.

Austin Conner breaks free and he is GONE!

Strath Haven and Rustin are once again tied at 21-21 with 6:51 left in the game @PaFootballNews pic.twitter.com/GG1BnVw6k9

Rustin got the football back with about seven minutes left in the fourth quarter, and ran that clock all the way down to two minutes and a chance to take the lead on a field goal.

For the second time this game, Sam Milligan wouldn’t let that happen. You won’t see too many quarterbacks blocking two kicks in a game, but the Bucknell commit is not your average athlete.

Strath Haven would take the ball down into Rustin territory with a chance to win following the blocked field goal, but never got further than the 18 yard line. This game would go to overtime for the second straight year.

Rustin started off with the football in overtime, and they got on the board with Chase Hatton’s second touchdown of the evening.

Rustin strikes first in OT, as Chase Hatton picks up another touchdown for the Golden Knights.

Anthony Crawford responded with a Strath Haven touchdown,  and it was now decision time for Kevin Clancy and the Panthers.

Do you kick the extra point after two Tim Styer extra points were tipped (but still barely went in) already in this game, or do you call what won you a District Championship in the 2021 matchup of these programs and go for two?

For the winningest coach in Delaware County history, the call was to go for the win once again.

This time around, destiny had different plans as a fumbled snap led to Rustin getting the goal line stop on a two-point conversion that they waited 357 days for.

RUSTIN HAS WON IT AS THEY STOP HAVEN ON THE TWO POINT CONVERSION!!

Revenge for the Golden Knights, as they take down Strath Haven 28-27 in another epic overtime battle @PaFootballNews pic.twitter.com/nEOXRHlLXj

“It’s amazing, all that we’ve been thinking about all year is how that felt when we knew that we should have won last time,” said Chase Hatton, who rushed for 77 yards and two touchdowns, including the game-winner. “When we saw that we were going to play Haven, we knew what had to be done. We prepared all week, had great practices, and the whole team showed out tonight and played together so it feels amazing.”

They say that the sequel is never as good as the original, but this game had everything you could possibly ask for in a rematch. It was a back and forth game with huge momentum-shifting plays throughout all four quarters that left fans on both sides on their edge of their seats just waiting for the next big moment.

Once again, all of that can come down to one play.

“Last year was last year and this year is this year, we were just focused on winning the game and trying to get to the next level,” Rustin Head Coach Mike St. Clair said. “I thought both teams played a very good game and it could have went either way. We just made one more play than they did in the end.”

It is a game that will be talked about for years to come in West Chester, but even more so if the Golden Knights are able to go on the road and pull off another upset. They travel to Fort Washington for a date with the undefeated #1 Upper Dublin Cardinals in the District 1 5A Championship, with a State Semi-Final berth on the line.

The Cardinals punched their ticket to the title game after a 30-0 shutout win over #4 Plymouth-Whitemarsh, and they have pitched three straight shutouts in this tournament with wins over Academy Park and Great Valley.

Rustin knows that they need to be at their best once again. For the Golden Knights, that starts in the trenches.

“First of all, always, every game, it’s our O-Line. Everyone on the O-Line, and we have amazing blockers at running back as well,” said Hatton. “There is still always stuff to improve on, we can celebrate tonight, but tomorrow we’re back to work and watching film.”

For Strath Haven, this is a devastating loss to end a season that had so much magic. It’s never easy for any program when their first loss of the season also happens to be their last game of the season, and especially not easy in this dramatic fashion.

For Kevin Clancy, it was an easy decision to make to go for two because of how much he believes in Sam Milligan and his players. Once Milligan raised two fingers in the air after the touchdown, the decision had made itself.

“Sam had a great game and him and all the kids have been great all year,” said Clancy. “Rustin made the big play at the end of the game and you have to give them credit.”

“Sometimes you get the bear, and sometimes the bear gets you.”