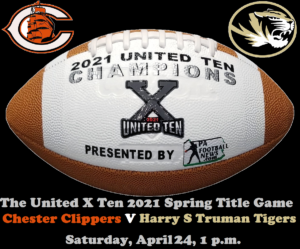 In September when the news came down that, unlike the vast majority of the Suburban One League, the Harry Truman Tigers would not be playing football second year Coach Ben Johnson was understanding, knowing the health and safety of the community had to come first, yet he was devastated. Then came the came a call from central administration, assuring Coach Johnson that they would do everything in their power to make sure his Tigers would play football in the Spring. With the turning of the new year, without knowing when or who they would play, Johnson got his team together to start to prepare for a yet unknow opponent they would face. The United X League was formed, the Tigers got to play five regular season games and on Saturday will travel thirty six miles to exit 6 of Interstate 95 to play the Chester Clippers for the United X Championship. It’s been a long journey from the crushing news in September to exit 6. It will not be the first time Johnson has coached on the famed A Field of Chester, Johnson was the Offensive Coordinator for the Clippers in 2010. He coached alongside Chester’s current Head Coach Bell and many of the current Clipper’s coaches.

When Truman has the ball all eyes will be on highly touted Running Back Sincere Thomas. The shifty, fleet footed Thomas will line up as a back, at  wide receiver and in the wildcat formation. Thomas can run between the tackles, sweep around the end or out run the defense as a receiver, as he did against Father Judge for a 95 yard touch pass. Thomas is just as impressive in the classroom carrying a 3.6 GPA. Quarterback Terrell Delp does more than carry his own playing in the shadow of his father, who is in the Truman Hall of Fame. Delp is a threat to pull the ball or scramble  and break a long run, but he is most dangerous when throwing the ball downfield. Delp possesses a cannon, which Coach Johnson is not afraid to deploy. Center Eliazar Mercado along with Rhamere McDuffie anchor a stout Tiger line, creating seems for Thomas and giving Delp time to get the ball downfield to two way  player Ron Wilson.

When the Clippers have the ball, the Tigers will count on Senior middle linebacker Deven Harris to stop Chester’s powerful run game. Coach Johnson calls Harris the ultimate blue collar, bring your lunch pail to work player. Harris is the team leader that holds himself and his teammates accountable on the field and in the classroom. Makai Jackson is the Quarterback of Truman’s bend but don’t break defense, the heady defensive back is the defensive signal caller for Truman’s  multi look defense. Coach Johnson is counting on his defense to force more three and outs for the Chester offense this week, by each player doing their assignments. Johnson knows if he allows the Chester power run game to get in a rhythm, it could be a long afternoon.

No matter what happens in the United X Championship game, Coach Johnson believes its been a great journey for his Tigers, full of life lessons that help mold these young Tigers into men. Non the less, he wants his Tigers to go out on top hoisting the United X Trophy.