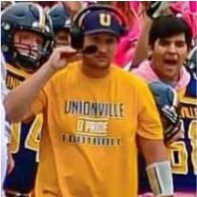 Unionville High School will have a new face guiding the Longhorns Football for the first time in nearly two decades. On Tuesday evening, the Unionville Chadds Ford School Board approved Tim Murphy as the school’s new head coach.

Murphy takes over for Pat Clark who retired from coaching at the end of this past season. While he is the new head coach he is a familiar face to the Longhorn community having served as a assistant under Clark for 14 years working with Wide Receivers, Quarterbacks, Special Teams Coordinator and for the last eight seasons he served has Offensive Coordinator.  Murphy also played for the Longhorns from 2000-2002.

When asked about what it means to follow in the foot steps of Coach Clark, Murphy responded “It means a lot. Coach gave me my first coaching job and mentored me into a coach but, also so much more. I have so much respect for him and what he has done with this program. I want to continue the standards and expectations he has created and build on them.”