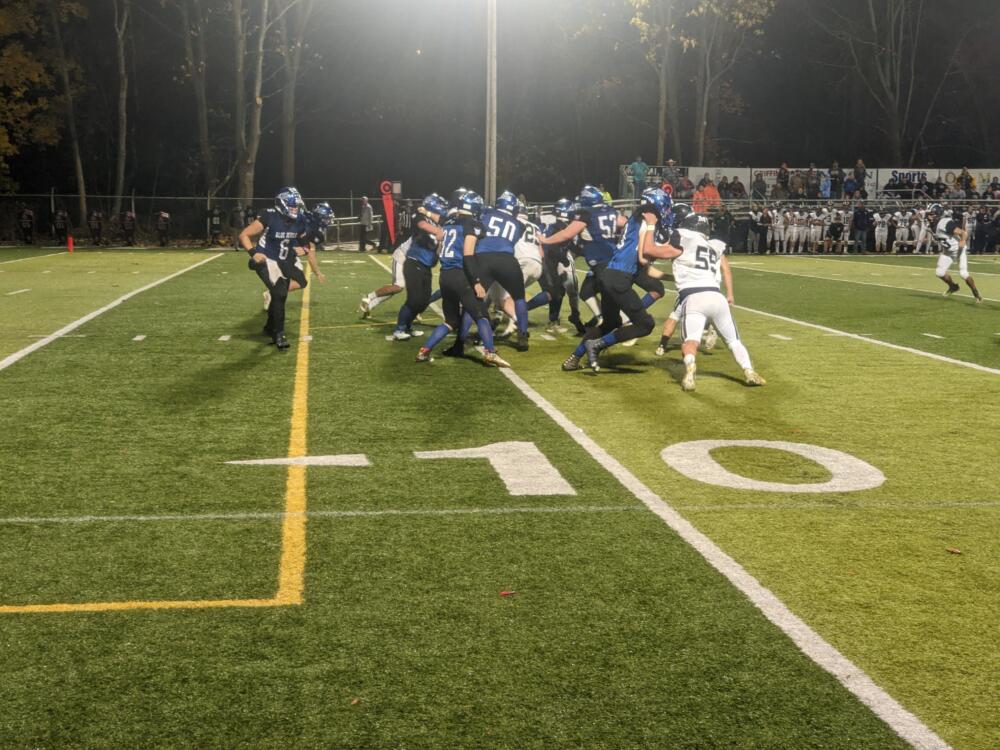 Tonight it was in the opening round of the District X Class A playoffs, 21-14.

“Many people thought it was a fluke when we beat them the first time,” said Cambridge Springs head coach Nate Liberty. “I’m so proud of this team. To beat a Mercer County twice in one season is no joke.”

The Blue Devils had beaten the Mustangs 32-22 on October 21st.

Cambridge Springs scored on their first two possessions to build a 14-0 halftime lead.

Van Jones returned a punt to the Mustang’s 34-yard line, where Brett Kania would cap the drive with a 6-yard run.

The Blue Devils then drove 91 yards on their second possession as Jones ran in a 7-yard touchdown.

Brett Kania would score his second touchdown of the night midway through the third quarter scoring on a 14-yard run.

Kania led all rushers with 97 yards on 14 carries with two touchdowns.

Mercer found the end zone before the end of the third quarter when Daemyin Mattocks scored a 4-yard run.

The Mustangs made things interesting when Mattocks scored his second touchdown on an 18-yard run with 3:23 to play.

Daemyin Mattocks rushed for 64 yards on 11 carries, while Nate Haines led the Mustangs with 111 yards on 19 attempts.

Mercer concludes their season at 6-5.

“We made great strides this season,” Lockhead concluded. “We’re trying to improve and get ourselves to play a four-quarter game. We have improved all season long. I couldn’t be prouder of this group.”

Cambridge Springs advances to play Eisenhower, who beat them 27-14 on September 2nd.