District 10 rang in the new year with a major region realignment proposal.

District 10 rang in the new year with a major region realignment proposal. The district has periodically shuffled its regions based on updated classification, but for the 2020-2022 cycle D10 went in a different direction. The new region proposal is more geographically based and will feature mixed classes.  The most obvious change is in the size and number of regions.

For the previous cycle, the district was broken into eight regions containing from three to seven teams. Only two of the eight featured teams from two classes, though most of the 5A teams in Region 7 were playing up a class. Under the proposed change, the district would have only five regions. Three regions of nine teams, one with 10 and one with three.

Region 5-Cathedral Prep (4A or 5A), Erie (6A) and McDowell (6A). *Team may be moved up due to application of the PIAA Success Formula.

The Region 5 teams will get two games each from the class 4A teams (Conneaut, Franklin, Oil City, Meadville, Warren, General McLane and Harbor Creek). One issue the district may face is what to do with Wilmington if it is bumped from 2A to 3A. It’s possible the Hounds would move from Region 1 to Region 3, with one of the Region 3 teams moving to Region 4. 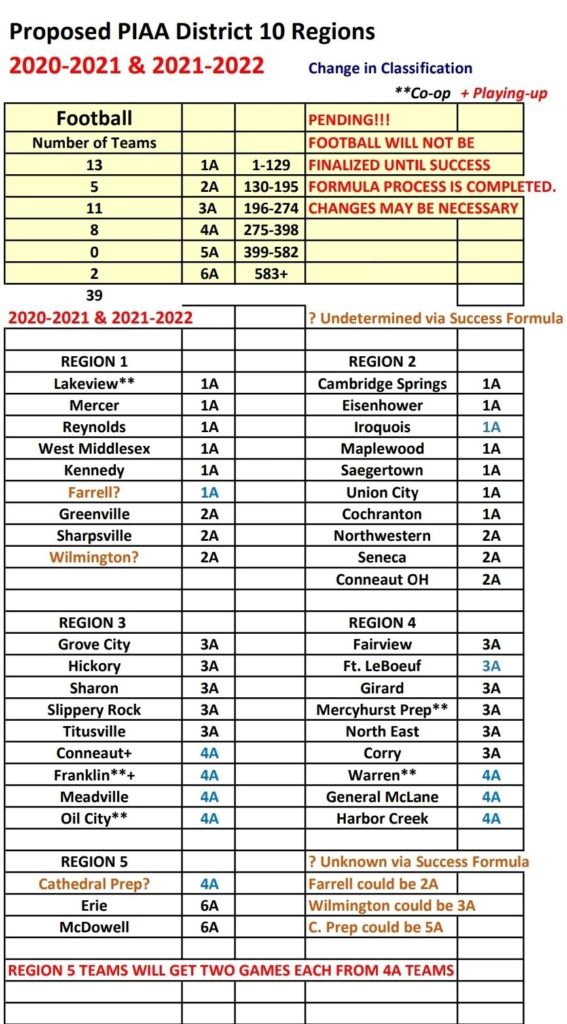 DuBois has left District 10 for District 9 and Kennedy is reestablishing its football program for the coming cycle The District 10 Committee will consider the proposal Jan. 15 during its meeting at the Avalon Golf and Country Club in Sharon.