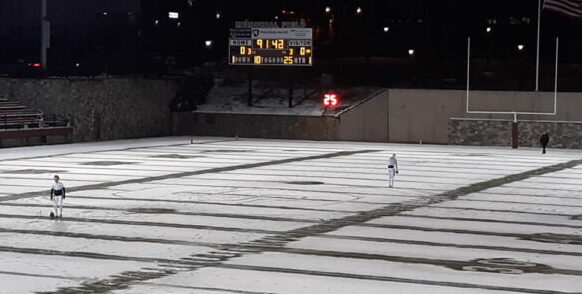 Wow!  What can one say about a game that was played in the snow, had 107 points scored, almost 840 yards of combined total offense, and took three overtimes to finally see someone emerge as the winner.  That was the case on a very cold Friday night in St. College at Memorial Field as the Little Lions made one more play than the McDowell Trojans to come out the victor, 57-50, and advance to the next round of the state playoffs.  State College head coach Matt Lintal was asked if he’s ever been involved in a game like that before.  “I have not,” was his reply, “we’ve had some overtimes, but haven’t had any triple overtimes.  Unbelievable.  Credit McDowell driving down here 4 hours and playing a whale of a game.”

There were plenty of great plays during the game by players from both teams, but none bigger than the play the State College defense made in the third overtime.  The Little Lions had taken the 57-50 lead on their possession of the third OT.  So, State’s defense had to hold McDowell which wasn’t having a lot of problems moving the ball.  On the first play from the ten, Trojan quarterback Ben Moore shoveled a pass to 6’2” 245-pound Christian Santiago whom the Lion defense had a tough time bringing down whenever he touched the ball.  He bulled his way into the line for 6 yards before being whacked by Stephen Scourtis causing a fumble that Mike Gaul pounced on to end the game.  It was Gaul, by the way, who caught a touchdown pass from Finn Furmanek to give the Little Lions the lead in the third overtime.

St. College recovers fumble in 3rd overtime to win 57-50. WHAT A GAME!! Congrats to both teams. No quit in either squad. Both were well-coached. @PaFootballNews @statehighfball @McdowellFBall pic.twitter.com/cRrATFlsJb

The game started out quickly and never really slowed down as both offenses moved the ball at will most of the time.  Both defenses did come up with four stops each throughout the contest, but by in large the Trojan and Little Lion offenses ruled the roost in this game.  State College took a 7-0 lead in the first quarter on D’antae Sheffey’s 10-yard run up the middle.  McDowell answered on their second possession.  Using Santiago as a Wildcat for most of the drive, the Trojans drove 80 yards in 6 plays.  QB Ben Moore took it in from 3 yards out to tie the game at 7.  It was the only snap he took on the drive.  At the end of the first quarter McDowell had 131 yards rushing, yet the game was tied at 7.

The Trojans took a 14-7 lead in the second when Santiago was sent in motion but he then stopped behind the center, took the snap, and plunged in from the one-yard line.   They had a chance to go up by two scores after the defense stopped State College for the third straight time, but they were in turn held at their own 14 by an inspired Little Lion defense.  The subsequent punt gave State College good field position at the McDowell 45.  A 33-yard pass from Furmanek to Donte Nastasi was followed by Sheffey’s 12-yard TD run to tie the game at 14.  Each team had another possession but no one scored, although time ran out on State College at the McDowell 10 after a Sheffey 41-yard run. 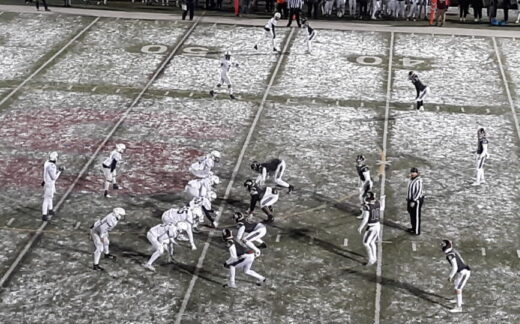 McDowell (in white) with the ball.

McDowell opened up the third quarter with a 3-play, 77-yard, one minute drive to retake the lead 21-14.  Artis Simmons was stuffed for no gain on the first play of the drive.  Then Moore hit Santiago with a 46-yard pass and followed that up with a 31-yard touchdown pass to Nick DeSanto.  State College came right back, scoring on Matt Wall’s 6-yard run.  McDowell was caught offsides on the point after attempt and Lintal decided to go for the 2-point conversion.  Owen Yerka found his way into the end zone for the 2 points.  That gave State College a 22-21 margin half way through the 3rd quarter.

On that drive Sheffey was hurt when he appeared to take a late hit out of bounds on the McDowell sideline, but no flag was thrown.  He never returned and finished the game with 141 yards and 2 touchdowns on 14 carries.  He would have had 3 TDs and over 200 yards if his 65-yard scoring run had not been called back due to illegal procedure on an earlier drive that would have increased State College’s early lead to 14-0.  He ended up being the leading rusher for both teams and he only played two and a half quarters.  “I have no idea how Sheffey is right now, but Matt Wall stepping up was huge.  He did a tremendous job,” stated Coach Lintal.

In the movie ‘All About Eve’ Bette Davis said, “fasten your seatbelts, it’s going to be a bumpy night.”   Little did anyone know that it was time to fasten those seatbelts as the game was about to get really interesting if it hadn’t been already up to this point.  The Little Lions tacked on another score with 36 seconds left in the third quarter on a Furmanek to Gaul 19-yard pass in which Gaul just outleaped the Trojan defender.  This gave the home team a 29-21 advantage after three quarters. 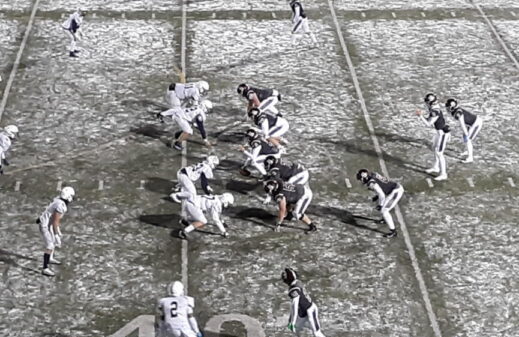 Ray Jackson, McDowell’s leading receiver, had been quiet most of the game.  That was about to change.  Jackson returned the State College kickoff to the Little Lion 48.  On third down, Moore threaded a pass down the sidelines to Simmons who made a nice play and raced the rest of the way for the score that covered 49 yards.  Even though there was still over 11 minutes remaining, Bo Orlando, McDowell’s head coach decided to go for two and tie the game.  Moore scored, but a holding penalty put the ball back to the 15-yard line.  Moore then passed to Jackson for the long distance two-point conversion to tie the game at 29 each.

State College then drove 62 yards in 12 plays to retake the lead 36-29 when Wall ran 7 yards for the touchdown with exactly seven minutes left to play, maybe.  The Little Lion defense forced a three and out and the offense trotted onto the field knowing they needed a couple of first downs to seal the win.  But it was the Trojans’ turn to come up with a vital defensive stand forcing State College to punt and when they did it was a short 22-yard kick.

McDowell, began the possession at their 37 but lost 6 yards in three plays thanks to a 9-yard sack of the quarterback by the Lion defense.  Facing a 4th down and 16, Moore launched a pass to Jackson who got position on the defender and pulled down the throw for a 30-yard gain.  On the next play Moore found Jackson again for 36 yards to the State College three.  Moore lost 3 yards on first down as the clock wound down to under a minute.  On second down, Simmons found a gap and ran in the tying score with 24 measly seconds on the clock.  The Lions took a knee on their possession and sent the game to overtime. 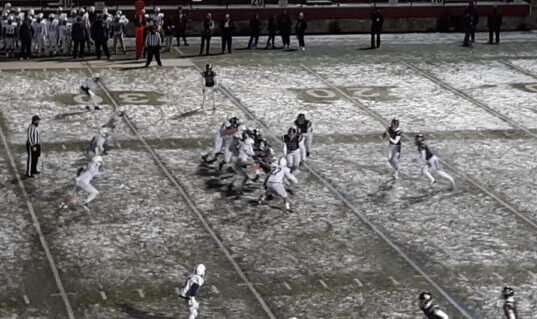 Furmanek looking for an open receiver.

The Little Lions got touchdowns by Nastasi in the first 2 overtimes, both on runs.  Those were the only two times Nastasi ran the ball the whole game.  McDowell scored both of their touchdowns in overtime on third down.  First, Jackson caught a 5-yard pass from Moore, then Santiago pushed his way in from the one.  With the score tied at 50, Gaul caught the 13-yard TD toss from Furmanek to give the Lions what turned out to be the winning touchdown.  Furmanek was sacked on the first play giving the fans more anxiety, but moments later they were partying like it was 1999 as the song goes.  Lintal said, “I was tempted to go for two, but had faith in our defense.”

State College is now 12-0 and will meet the winner of the North Allegheny-Pittsburgh Central Catholic game.  McDowell finished a banner season 10-3.  Both teams featured excellent kickers who easily made all of their extra point attempts.  Junior Alex Sontheimer of McDowell was near perfect for the year as was senior Kajetan Kaszubowski for St. College.  Furmanek finished the game 16 of 25 passing for 171 yards and two TDs.  Nastasi grabbed 5 of those passes for 68 yards.  Simmons led the McDowell ground game with 110 yards on 23 carries.  Moore was 11 for 16 passing, throwing for 236 yards and 3 touchdowns.  He was intercepted once by Nastasi.  Santiago caught 4 balls for 76 yards to lead all receivers, and Jackson had 4 catches for 70 yards.  The only other turnover for the game was the overtime fumble by McDowell.

St. College recovers fumble in 3rd overtime to win 57-50. WHAT A GAME!! Congrats to both teams. No quit in either squad. Both were well-coached. @PaFootballNews @statehighfball @McdowellFBall pic.twitter.com/cRrATFlsJb