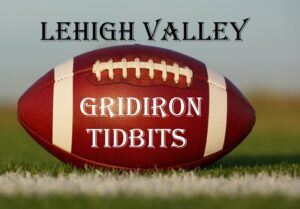 With the cloud of Covid-19 still looming over high school football in the Commonwealth of Pennsylvania, still schools are moving ahead with the season as best they can and sometimes that means making last minute changes to their schedules to allow game to continue.

As was the case a couple of weeks ago when Bethlehem Catholic was scheduled to play Whitehall at the newly renovated Zephyr Stadium. Whitehall High School had a few students contract the virus and had to cancel the day of the game. Earlier in that week Bangor who was to meet up with Northwestern Lehigh, but again Northwestern advised that few students came down sick and that game was postponed. So Bethlehem Catholic and Bangor got together Friday and decided to play Saturday afternoon in Bangor. Becahi did manage to get the win 42-7.

I’ts no different here in District XI, the home of the Colonial League and Eastern Pennsylvania Conference. The only team who has yet to play a game in the Lehigh Valley, is the Parkland Trojans, but barring anything unforeseen, they will take the field Friday night at home against rival Whitehall. Their season opener with Allentown Central Catholic was canceled. Pleasant Valley and Pocono Mountain East will open up their season this weekend in the EPC North.

There will be no state playoffs this year in the district, as the committee decided that teams will take part in a district tournament instead.

In the EPC Nazareth leads the way at 2-0 after a 21-0 shutout this past weekend over Bethlehem Catholic. Easton had their opening game Saturday night at BASD Stadium against Liberty, Easton was the home team as Cottingham Stadium is under renovation. The Red Rovers and Hurricanes were deadlocked at 0-0 at halftime. In the second half Easton began to roll with a Marcus Williams 41 yard punt return and two touchdowns by running back Nahjee Adams in a 30-7 win. Emmaus opened up with William Allen on their new field turf at EPSD Stadium and took care of business 58-0.

This weekend slate of game kicks off with Louis E. Dieruff (0-1) traveling to face Emmaus(1-0), on Thursday.

Saturday October 11th:
Easton (1-0) at Bethlehem Freedom (1-0)
Whitehall (1-1) at Parkland (0-0)
William Allen(0-1) will host Allentown Central Catholic, which will be played at J. Birney Crum Stadium after what was thought to be a sinkhole, was just a damaged pipe that will be fixed in time for the game.

Looking at the Colonial League, Notre Dame Green Pond seems to be the team to beat early in the season. with a 4-0 record The Crusaders dominated Palmerton 48-7. Palisades is right there in the running at 3-1 with a 28-25 win over Salisbury.

« The Drive: Eagles March 96 Yards in Final 1:30 for Win at BEA (via Tyroneeagleeyenews.com)
Protime Predictions by Phil »