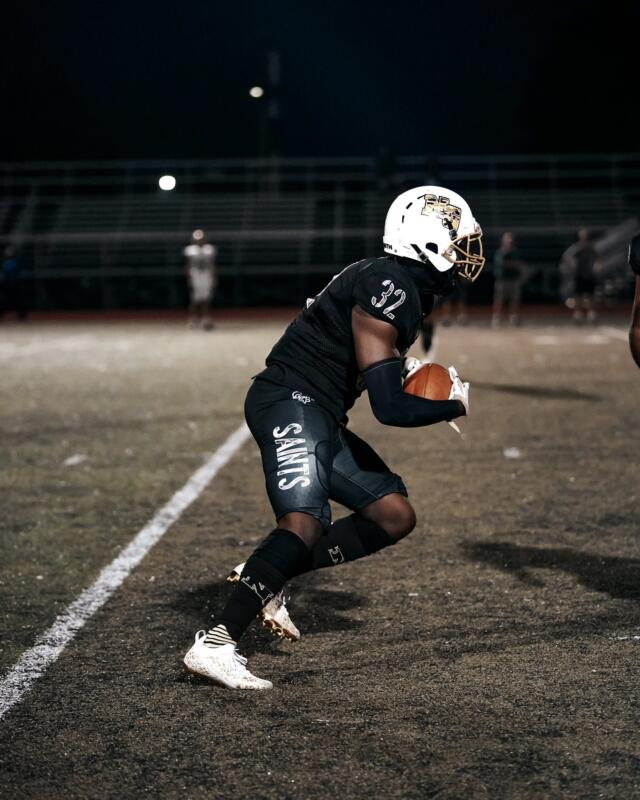 Neumann Goretti is led by HC Albie Crosby who is still searching for his 1st state title leading the Saints. The Saints have come close a few times but have fallen short of the ultimate prize. This season NG finished the regular season 5-3 with conference losses to Conwell Egan and Bonner-Prendie. They would get a rematch with CE last week in the CL 3A championship game and Coach Crosby felt “The players and coaches made great adjustments to what Egan did successfully against them in the first game. We made personnel changes and altered packages to put our team in a better position to succeed”. When asked how he would motivate and prepare his team for a Kipp team with only one win under their belt this season Coach Crosby said “It’s high school football you have to prepare for every team the same without taking them for granted. Coach Albie says the Saints look to jump on them early because Kipp plays with lots of emotion that they must match and surpass. Kipp starting QB went down the guys rallied around the backup who was very mobile and led them to the victory. He mentioned that his team has one of the better defenses in the state when you look at their numbers. In fact, NG has only allowed on average 10 points per game this season. In their losses this season the offense had trouble moving the ball and scoring touchdowns as they were held to a total of 28 points in those 3 games. In the 6 wins they scored a total of 203 points. Players Coach Albie feel have been key contributors are Sr. LB Sam Hobbs (Syracuse offer), Sr. WR Denim Smith (IAA interest), Sr. OL Jose Rivera (Army, Navy, Air Force candidate), Sr. WR Quasim Major, Sr, QB Anthony Zungolo, Sr. OL Lou Governatore & Sr. CB Kyan Johnson. Coach is excited as the Saints improve week to week becoming better and watching the offense grow and mature over the season.

KIPP last week won the Public League 3A title over a favored Vaux team 22-16 with assistance from their backup quarterback who was sprang into action when the starter went down. He not only threw for a TD he also scored the game winning TD on a broken play where he escaped would be tacklers and rushed into the endzone. The Tigers while not as deep as most Public League teams are highly physical, play with tons of emotion as Coach Albie noted and they look to cause havoc on opposing offenses by mixing in a good number of stunts along the DL and sending LB’s and DB’s to disrupt the passing game.

Outlook: This game will be won by the team who is discipline, controls the line of scrimmage and also is most physical. Kipp was an underdog last week but won and will look to knock the CL champs out of the playoffs by matching their physical intensity. The Saints on the other hand just have to play their game which is utilize their rushing attack while allowing their QB time on passing downs to find his open receivers. The KIPP DB’s for their size do play with some spunk so NG will have to fight to get off the LOS while still playing with composure. NG has the depth and larger talent pool, so this is one of the easier games to project.

« DISTRICT One – 6A Quarterfinals Preview
District 12 4A Championship Game Preview »