Northeast reigns as Champions over a tough Lincoln team 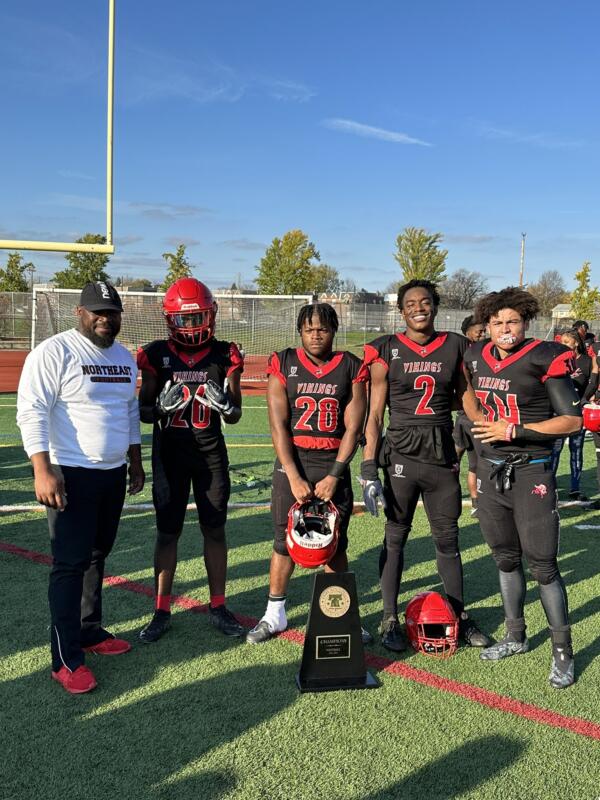 The Lincoln Railsplitters entered the game looking for their first Public League Chip since 1978 and made their first title game appearance since 1979. The Railsplitters came into the game undefeated against PL competition and faced a tough non league schedule that very well prepares them for this title game. They started off on fire as they capitalized on a fumble on Northeast first drive around midfield by Jr RB Kahmir Prescott that they fumbled and used to drive to down field before Jr sensational QB Kahni Knight found star Sr WR Darius Hill for a great TD giving them a early 6-0 lead. They’d force Northeast to punt on the ensuing possession and once again on 4th and long Knight found Hill for yet another long TD catch with a successful 2point attempt the lead grew to 14-0. The home crowd seemed stunned while the visiting crowd and team celebrated full of energy. The next Vikings drive would stall and who would provide that first spark none other than the duo of Sr QB Sabor Stevens and Prescott who connected on a 67 yard TD bomb where somehow Prescott outran the secondary and had an easy path to the end zone cutting the lead in half to 14-7. The Railsplitters ensuing possession saw them have success mixing the run and pass while also getting help from costly NE penalties as they drove down field to get the ball deep in NE territory until Prescott jumped a route and intercepted the ball at the 8 yard line returning it 64 yards to the Lincoln 28 yard line. The Vikings offense ate up the clock and with 2:05 left facing 4th and goal Sabor delivers a striking pass to Jr Wr Brick Moore in the end zone for a score despite Sabor taking a bruising hit upon releasing the ball from Jr DL Miguel Mendez. The Vikings defense would force a quick 3 and out from Lincoln and after a good punt received the ball at their own 23 yard line with :25 seconds left in the half. 2 quick passes for the hall to the Lincoln 43 yard line with one second left in the half and the Vikings uncorked a hell of a play where Prescott was the inside WR broke through the zone and ran away from defenders for a 43 yard score with no time remaining in the half. The extra point would be no good and the score now was NE 19 Lincoln 14.

The second half would be a battle of defense as both offenses at time sputtered while the defenses clamped down and that would lead to the final 5 minutes where the Vikings offense used a ball control offense and on a key 3rd and 14 Sabor connected with Sr WR Rahsaan Swygert on a 35 yard completion for a huge 1st down and the clock running under 3 mins at that point. Lincoln probably should’ve used their timeouts a little earlier to preserve the clock and force NE to throw but they didn’t and on 3rd and 8 they were called for 12 men on the field after a time out was taken. This hurt them as the Vikings then converted on 4th and 1 on a rushing attempt by James Bermudez to ice the game. A few kneel downs and the ball game was over.

Lincoln had nothing to hold their head down for they played exceptional and exceeded most expectations they are a talented bunch with many underclassmen returning who started this year. Khani has another season under center at Lincoln and return plenty of weapons to be back in the big game next season. Hill should garner plenty of attention from recruiters and will be an impact college player next season. They still have one goal left to accomplish and it would mean the world to the alumni and school for a win on Thanksgiving against neighbor Father Judge. The RailSplitters haven’t won on Thanksgiving since 1989.

Senior QB and second year starter Sabor Stevens was given the game MVP award and rightfully so. Being a senior captain starting QB is an honor at NE that he cherishes. When asked about his preparation for this game he stated  that “he came in thinking we have to win but also that Lincoln wasn’t going to come in and just lay down like some predicted”. The first TD pass to Prescott he said that “I saw him open and put it up for him to make a play which turned out to be a touchdown and turned the game around”. On the score before halftime and “the play design was for Kahmir to get the ball and he made the play”. When asked being a returner starting QB what it meant for him he stated “Being the returning starter and a senior I knew I had to make an impact at some point and do what was needed as the QB and captain of the team. That includes stepping up and making clutch plays happen to lead my team to victories throughout the season”. Going into the city championship game Sabor says simply the team will evaluate the offensive and defensive film, prepare all week and give it their all”. Currently his recruiting interest has been minimal however after the season his interest should pick up greatly as he played a great game on the big stage showing he’s a field general.
Jr All Purpose athlete Kahmir Prescott finished the game leading the Vikings in total yards from scrimmage and in TD scores. Simply put he’s been the jolt in the teams offense whenever they needed a spark. He simply said “falling down 14-0 early I saw my team was down and falling apart and they needed me now and my coaches gave me an opportunity to make a play and I was able to make a play as big time players make big plays” on the first TD reception. When asked how he was able to read and time it perfectly to snag the interception he said that “I knew he likes to get the ball out fast and he gives up where’s he going with the ball instantly so I read his eyes and made the play that needed to be made”. When asked how the team was able to bounce back from the large deficit he said “ Me and my team have strong bonds we all love each other and will die for each other out there we play for one another and never give up to the final whistle”. As for the Prep game he stated the mindset is to be dogs fight and continue to fight and never stop fighting and try to prove to everyone prep can be beaten”.
Coach Eric Clark won his 2nd public league championship as HC and said that Lincoln was a very good team, played with great passion, coached up and saluted their coaching staff and players on a great game. When asked about his QB he stated “Winning the MVP was his moment and he was extremely proud of him and his play this season”. He also stated that “Prescott is amazing, electrifying and makes me look like a better coach than I am lol”.
In closing Hail to Northeast on a great win and next up for the Vikings is a date with SJ Prep Friday night at O’Hara for the District 12 6A championship.