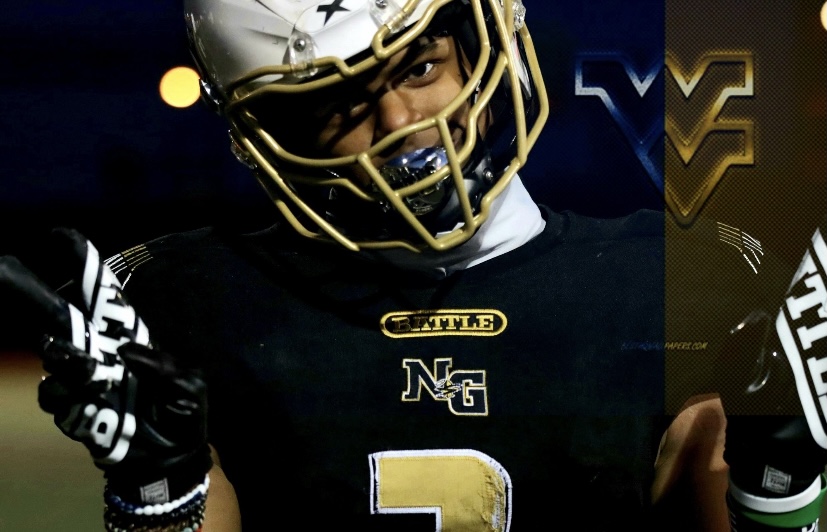 Photo by Sykotyk and Daniel Reed.

Wednesday afternoon Neumann Goretti star Raleigh Collins announced his top two choices to continue his academic and athletic career. The two choices came down to West Virginia and Penn State. Today Collins announced via Twitter that he will take his talents south and become a Mountaineer. Below you can find an interview with Raleigh about some of the reasons why he decided to go home to West Virginia.
PFN: Where did you commit?
West Virginia University.
PFN: Why did you choose to commit to the Mountaineers?
I chose that school because I have built a great relationship with coach Koonz coach Scott and coach Neil Brown.
PFN: Who was your biggest influence at West Virginia? who recruited you?
I would say coach Koonz, coach Albie, and coach DT as well as my parents. They each helped me get exposure and helped me pick the right school.
PFN: What are the Mountaineers getting in a player like you?
They are getting a very physical and aggressive player. I think my football IQ is very high so I can play anywhere if needed. I would say a very versatile player as well.
PFN: What was the recruiting process like for you?
It was very fun at the beginning but then challenging. COVID did not allow me to visit schools so I had to go off of little information. But after it cleared up and I was able to visit WVU and I]I felt like I was home.
PFN: What position were you recruited for?
Will Linebacker.
PFN: Do you know what you’d like to study?
I would love to go into Architectural Engineering.
PFN: What role did your parents play in your decision?
A major role, especially them being from West Virginia and still having all my family there.
PFN: What do you think is the most exciting thing about the program?
I think the potential of this 22 class, this class is excelling and will be a historical class.
PFN: What are you most looking forward to while playing for them?
Building relationships with coaches, players and creating another family.
PFN: Tell everyone out there in the football world something they’d never know about you until you told them:
I am a heavy baseball player, so I may try to play at WVU.
PFN: Who is the person who most influenced you in your football career?
My dad.
PFN: What is it you’d like all your high school teammates and fans to know about your decision that you might have a hard time saying in person?

It was a very very very hard decision to make, a lot of things went on behind the curtains but I am very happy with my choice and hopefully, they will be as well.