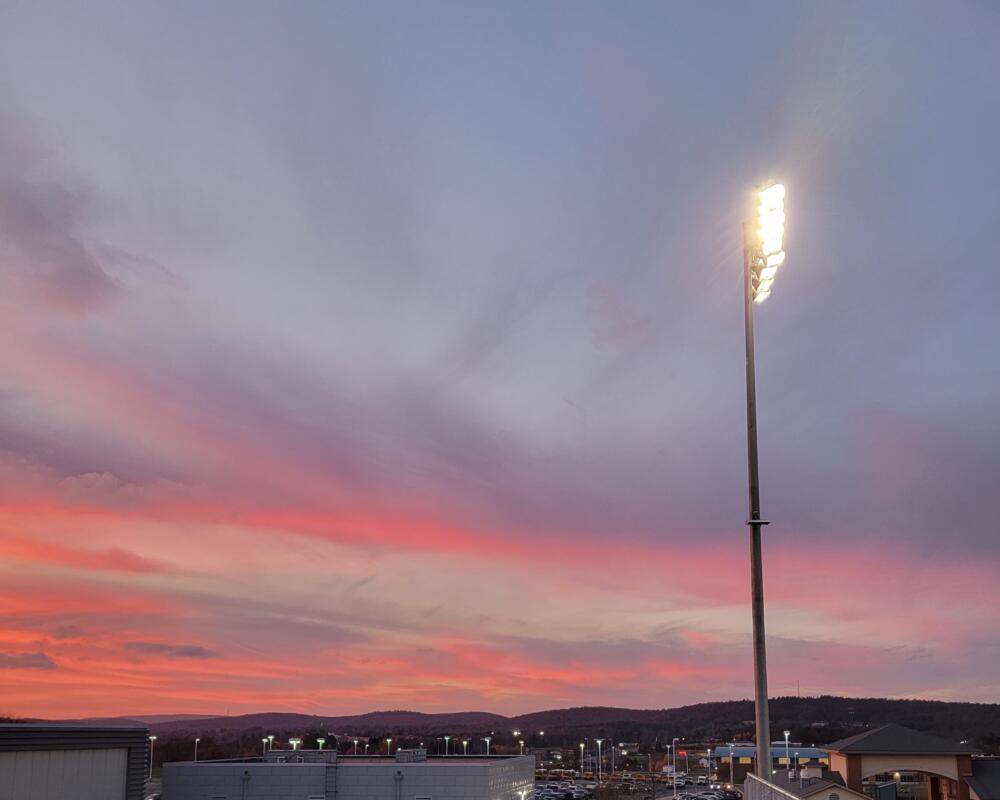 Dallas runs all over the Warriors, 49-28

It was a seasonably warm night in the Back Mountain as the District 2 Class 4A Playoffs got underway.  The #3 Dallas Mountaineers hosted the #6 Wyoming Area Warriors in what most anticipated to be a clash of running offenses.  Additionally, Dallas had struggled to stop the running game of several recent Wyoming Valley Conference foes, and tonight’s game was anticipated to be a challenge for the higher seeded Mounts.

The only problem was, the Warriors could not stop Mountaineer RB Parker Bolesta.

Bolesta, who came into the came with 2090 yards rushing on the season and 29 touchdowns, scored on a 49 yard TD run 33 seconds into the game after the Warriors tried and failed at an onside kick on the opening kickoff.  The Dallas defense got a big stop on the Warriors first drive when DL Brady Rosencrans got a big 3rd down sack, forcing a punt.  Dallas then stumbled when QB Brady Zapoticky’s pass was deflected and then intercepted by the Warriors.  Wyoming Area then reeled off several runs by RB Aaron Crossley and RB Lidge Kellum, but were stopped on 4th down deep in Dallas territory on a sack by DL Lucas Schultz.

The Mounts next drive was more Parker Bolesta, with a nice 12 yard reception by Zach Paczewski in the mix.  Bolesta then capped the drive with hist 2nd TD run of the game, a 22 yard scamper to make the score 14-0 Dallas.

Starting the 2nd quarter, the Warriors could not get things going after a fumbled snap and loss of yardage put them further back.  The drive stalled and they were forced to punt, but Dallas got good field position and Parker Bolesta took it to the house 2 plays later with his 3rd score of the night, a 49 yard TD run to make it 21-0 Dallas.  Wyoming Area would then use multiple formations and runners on their next drive on which QB/RB Michael Crane ripped off a nice 23 yard run and was pushed out of bounds at the 1 yard line of Dallas.  Crane would run it in on the next play and it was 21-7 Dallas.

The Mounts answered quickly.  DB Nate Malarky had a great kick return to set up Dallas in great field position at their own 42.  QB Brady Zapoticky then threw to RB Dylan Gesky for 13 yards, and later hit WR Joe Peters for 12 yards.  The Mounts then scored when WR Zach Paczewski made an incredible catch in the end zone, a 22 yard TD to make it 28-7 Dallas.

With only 4:56 to go before the half, the Warriors drove quickly down the field on a mix of runs by Michael Crane and Aaron Crossley, and scored on a great catch and run of 17 yards by TE Justin Francis to make it 28-14 Dallas with only 46 seconds left.  The Mounts started at their own 39, and used the sidelines and timeouts wisely including 2 big catches by RB Dylan Gesky to drive to the 3 yard line of Wyoming Area with only 1 second left.  Bolesta then ran it in for his 4th TD of the half to make it 35-14 at the half. 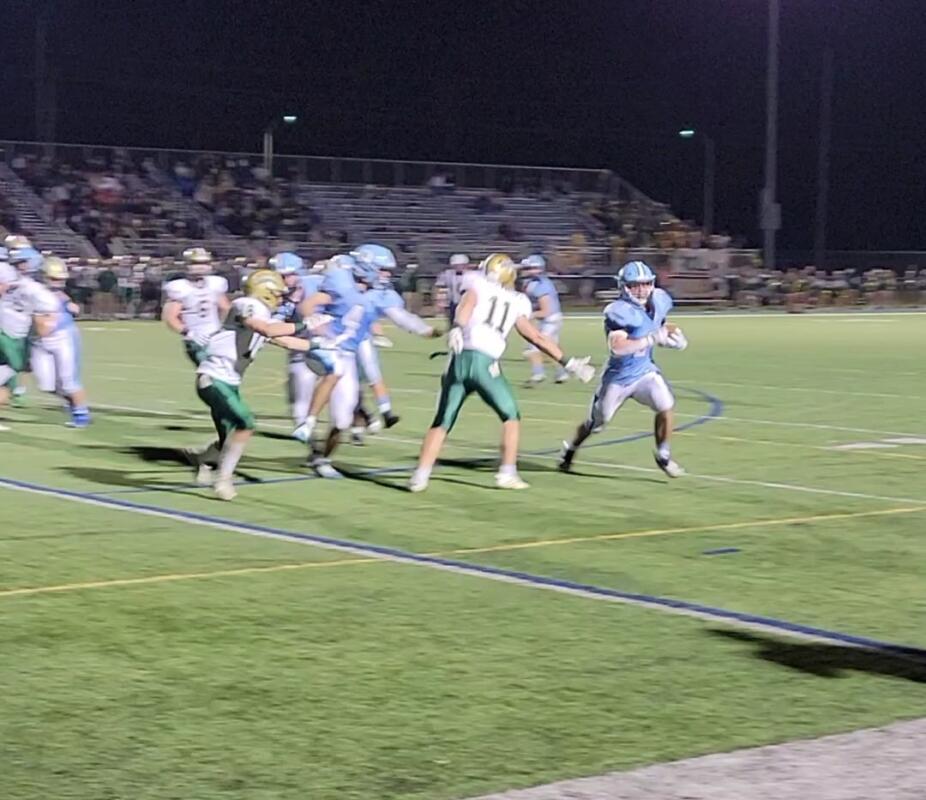 The Warriors were desperate to get back into the game, but they were forced to punt when their initial 2nd half drive stalled.  Their punt was blocked by Parker Bolesta, and the ball recovered by DB Lucas Tirpak who returned it approximately 40 yards for a TD.  With the PAT blocked, it was 41-14 Dallas.  The Warriors then seemed to gain a little momentum as they substituted different running backs into the game on successive plays and drove past midfield.  The drive stalled however, and Mountaineers WR Zach Paczewski has a nice punt return to the Warrior 44 yard line.  Dallas then used a big 28 yard run by RB Dylan Gesky, who then followed it up with a 3 yard TD run of his own.  The 2 point conversion was also successful with another Gesky run, and it was Mercy Rule time with the score 49-14 Dallas.

With Dallas deciding to rest most of their starters at this point, the Warriors did manage a TD run by Crossley of 44 yards to make it 49-21 near the end of the 3rd quarter.  They also scored midway through the 4th quarter on a Lidge Kellum 53 yard TD run, but it was too late to make a difference.  The Mounts then drained the clock, and the final was 49-28 in favor of the #3 seeded Mountaineers.

Dallas OL John Scherer says the Offensive Line blocking was a team effort and gave credit to the rest of the rest of the line: “They (Wyoming Area) ran an even front, we like blocking against even, we practice it a lot….so it was a good night for us.”  RB Parker Bolesta also gave his teammates a lot of the credit, saying “We have people making plays all over the field…” and special praise for the Offensive Line as well: “..Our O-Line blocked extremely hard, gave me the option to run anywhere I wanted.”

Dallas now heads up to Archbald for a huge game next Friday against the #2 seed Valley View Cougars. 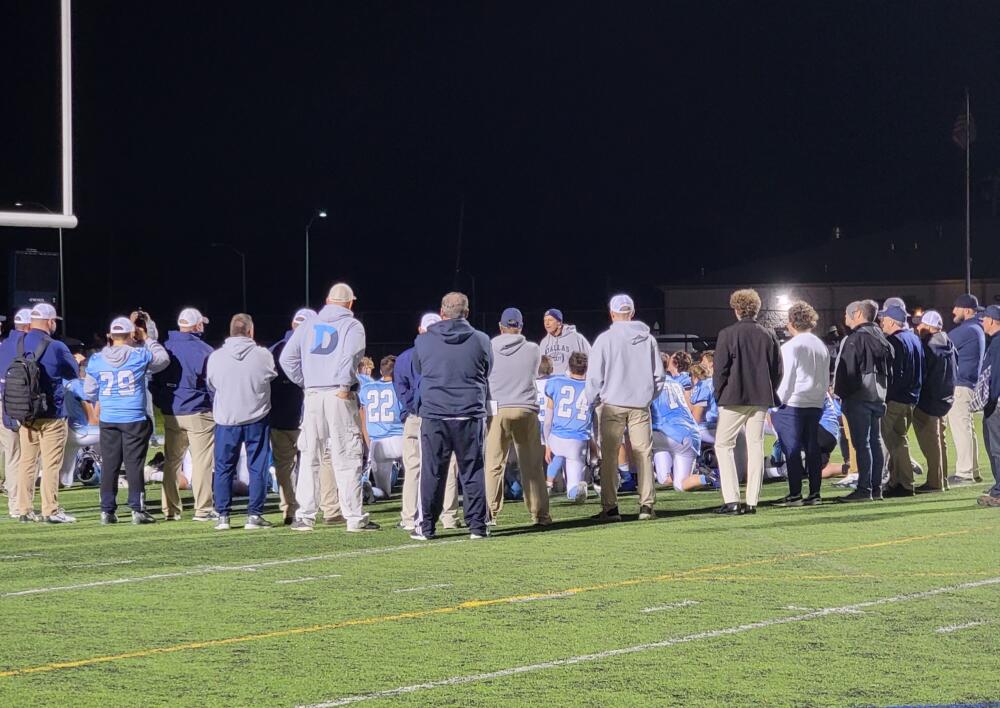