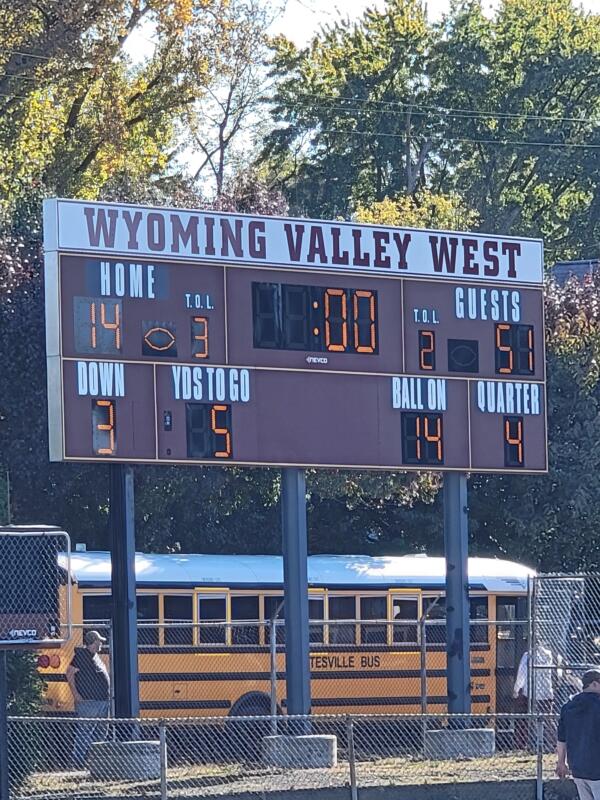 On this gorgeous October afternoon in Kingston, the 3-5 Holy Redeemer Royals played host to the 5-3 Pittston Area Patriots.  The Royals have gotten inconsistent play as a whole this season, while Pittston is on a solid roll after some early season defeats.  All signs pointed to a decent matchup.

Pittston took the opening kickoff and had a solid drive with a mix of pass and run, and scored when QB Drew Delucca hit Rob Barbieri in the end zone.  After the successful 2 point conversion, the Royals struck back immediately when Zach Perta outran the Patriots defense on a catch and long run for a TD.  The Royals also went for 2 and appeared to convert, but a penalty negated it and the re-attempt was no good which left the score 8-6.

Unfortunately for the Royals, this was a sign of things to come.

The Patriots marched right back down the field and capped another drive with a good mix of play calling with a Harry Pugliese 13 yd TD run which made the score 15-6 Pittston. The Royals ensuing drive stalled, and the Patriots took advantage with another strong drive capped by a Delucca to Kevin Lockett 10 yd TD pass which made the score 22-6 at the end of the 1st quarter.

At the start of the 2nd quarter, the Royals and Patriots traded possessions, and when the Royals next drive started deep in their own territory, the Pittston defense came up big with the pressure and Royals QB Jacob Hunter fumbled in the end zone and recovered but was tackled for a safety. 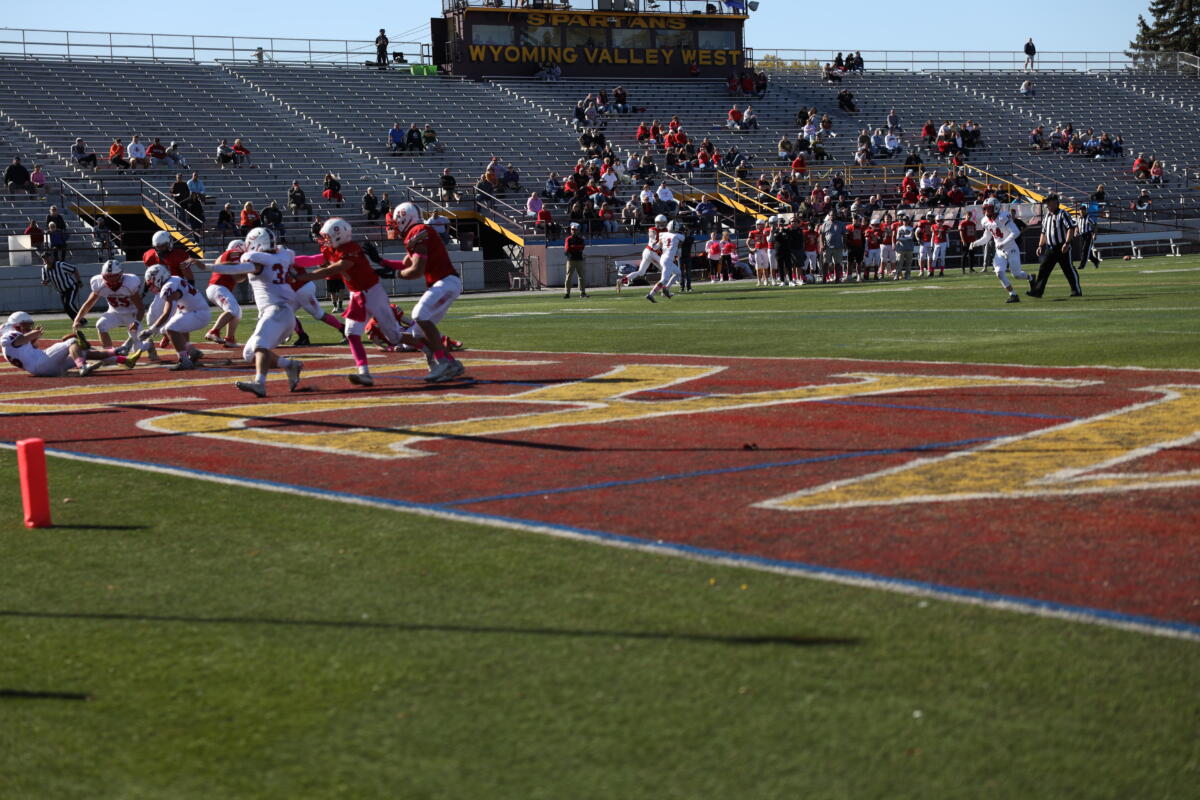 With the score now 24-6, the Patriots knew they would get good field position and took full advantage with a strong drive that ended with a Harry Pugliese 3 yd TD run and 31-6 lead. 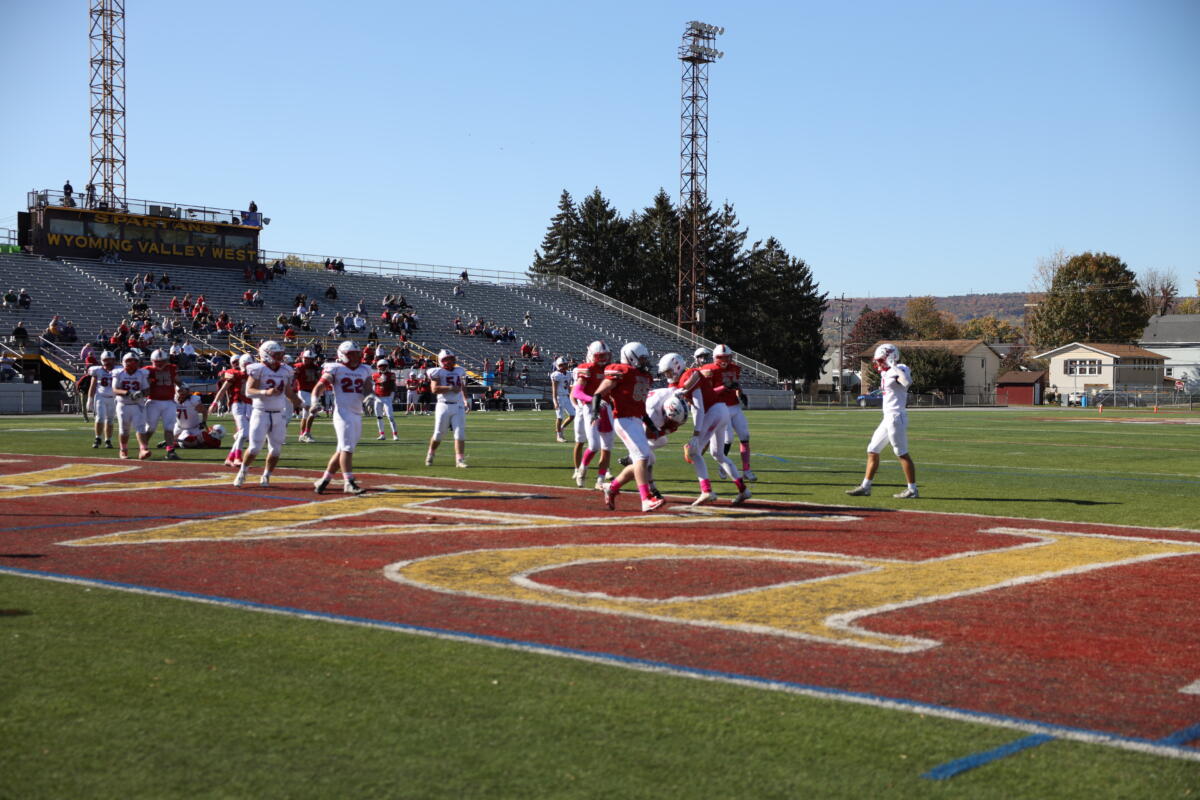 With time running out in the 1st half, the Royals managed to get downfield quickly and scored when Hunter hit DJ McDermott wide open in the end zone as time expired for a TD.  With the successful 2 point conversion (also to McDermott), the Royals cut the lead to 31-14 at half.

Any momentum the Royals gained right before halftime was soon erased however.  Pittston managed a very well-mixed drive with runs by Pugliese and 2 key receptions by Kevin Lockett and Rob Barbieri, and then capped it with a great effort by Pugliese diving for the pylon for a TD that made it 38-14. 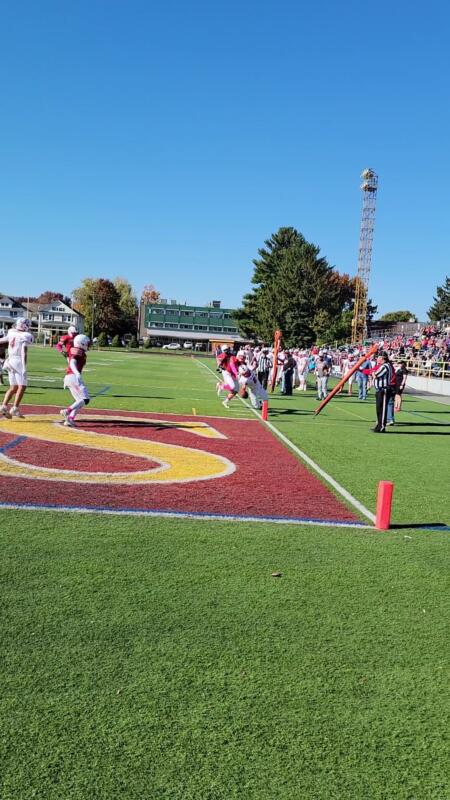 When the Royals next drive stalled, a bad punt gave Pittston a short field and Delucca hit Barbieri for a 20 yd TD reception which made it 45-14 with 737 still left int he 3rd quarter.  The wheels then cam completely off for the Royals when Hunter’s pass was intercepted at midfield by Xzavyier Blackshear, and Delucca immediately hit Anthony Ranieli for a TD.  It was 51-14, and the mercy rule was invoked.  There was no scoring in the 4th quarter, and the Patriots improved to 6-3 while the Royals fall to 3-6.

Pittston is on a roll on offense right now.  After the game I spoke with Jake Mills, who played Center today for the Patriots and nothing but praise for Harry Pugliese:  “He’s a great back, he finds the hole and he goes….nobody catches him…”  He also praised his QB Drew Delucca: “I like how he stays calm (in the huddle), doesn’t fold under pressure and he gets the ball out.”