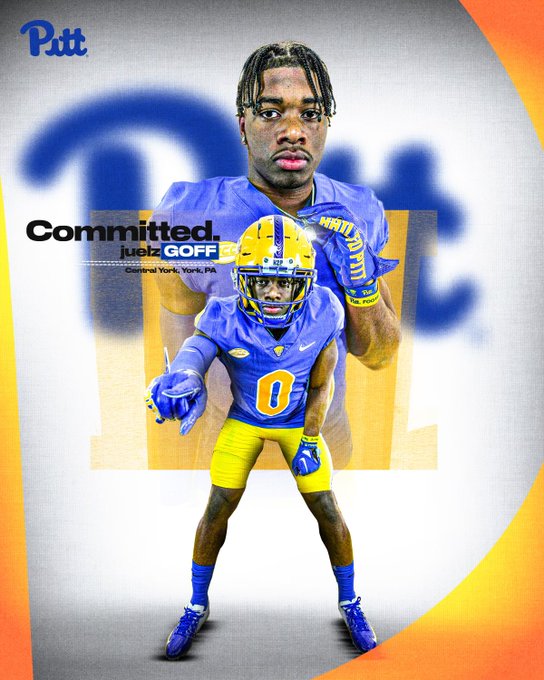 Juelz Goff Junior season ended with being selected to the PA Writers All State 6A team and a nice crop of D1 offers. His 2023 season began with a bang as he wasted no time deciding where he wants to play college football. The 5-10, 190 Panther chose to remain a Panther, of a different color and announced today his choice is the Pitt Panthers. Goff carried the ball 195 times for 1,611 yards. He also hauled in 24 passes for 335 yards. He scored 31 total touchdowns with 26 coming on the ground, three on receptions and two on kick returns. We caught up with him to ask him about his choice:

PFN: Why did you choose to commit to Pitt so quickly?
Pitt was an amazing fit, and I couldn’t miss out.
PFN: Who was your biggest influence there. , who recruited you?
Coach Narduzzi and Coach Borbley
PFN: What are they getting in player like you?
Speed. Explosion. Catching ability and agility
PFN: What was the recruiting process like for you?
It was very exciting, but kind of overwhelming
PFN: Do you know what you’d like to study?
Business Management
PFN: What role did your parents play in your decision?
They gave me good feedback but stood behind my decision
PFN: What do you think is the most exciting thing about the program?
The culture
PFN: What are you most looking forward to while playing for them?
Becoming a better man than I came in
PFN: Tell everyone out there in the football world something they’d never know about you until you told them:
I played wildcat Qb for a full game. Running the ball every play
PFN: Who is the person who most influenced you in your football career?
My father n Saquon Barkley
PFN: What is it you’d like all your high school teammates and fans to know about your decision that you might have a hard time saying in person?
It can get hard, it can get overwhelming, but keep your composure and find what’s best for you.