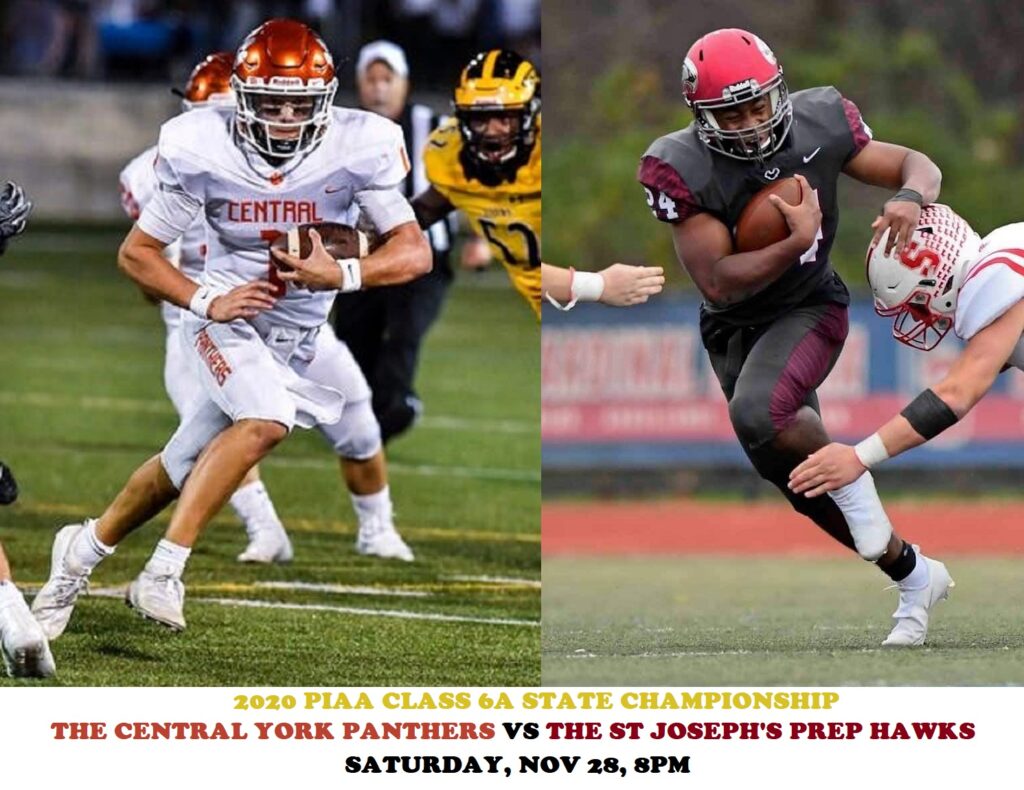 St. Joe’s Prep highlights star power all over the field. Every unit boasts players with multiple power five offers. Led by Ohio State commit Kyle McCord on offense and the Trotter brothers on defense, the 5-0 Red Hawks have yet to be tested, blowing out every opponent, including impressive trouncings of La Salle College Prep, Archbishop Wood, and Souderton in the PIAA semi-final. You’d be hard-pressed to find a weakness on this Hawks team.

This is the first time the Panthers of Central York have made it to the show.  Central York is led by QB Beau Pribula, a Penn State commit.  He’s pitched the pigskin for 1,885 yards and 31 scores.  His dual threat ability has permitted him to tally 10 TDs on the ground also.  Judah Tomb is his favorite receiver with 39 grabs for 733 yards and 12 touchdowns.  RB Isaiah Sturgis has over 600 yards and 7 TDs.  The defense is led by the tremendous tackling trio of Seth Griffiths, Jack Smith, and Carter Glassmyer.  The Panthers are averaging 53 points a game while only giving up an average of 9.  The Hawks average 45 points and their first team defense do not give up much at all.

Linebackers Jeremiah (Clemson commit) and Josiah Trotter are already in the backfield as the ball is snapped and the Hawks bulky defensive line is filling all the gaps. This defense will dare the opponent to try to throw the ball downfield, but with such a nasty pass rush, opposing quarterbacks and receivers have little time to make reads and get open.

Get rid of those “first time here butterflies” fast. No time to be awestruck as the Prep will have you looking back and scratching your backside if you don’t get in the game right away. A heavy dose of protection for Pribula to find his receivers. Getting Tomb in space is going to be the key. He’s got speed, but does he have that “beat out FBS prospects” speed?

Much the same, no time to get used to being in the title game.  The Panthers will need to play fast, aggressive defense and try to get to McCord without overlooking the gaping holes the offensive line for the Hawks make for their stable of running backs, all while covering Marvin Harrison Jr and Samir Hagans. If ever there was a need to play a perfect game, this would be the time.