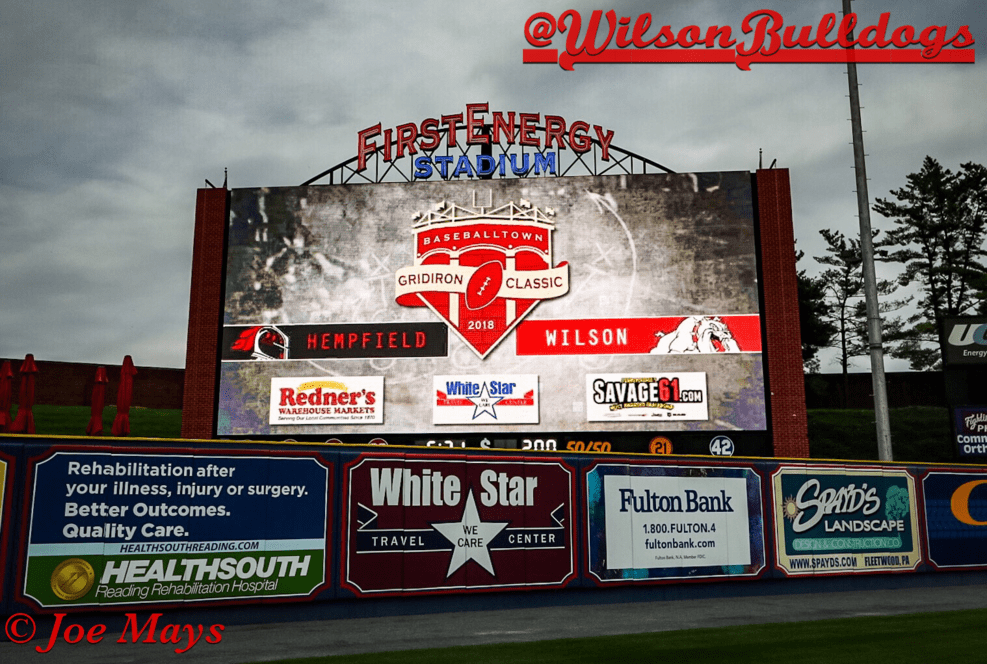 The Bulldogs capped the 2018 Baseballtown Gridiron Classic in style with a 26-16 victory over Hempfield at FirstEnergy Stadium. Wilson jumped out to a 13-0 lead and got some key defensive plays throughout to improve to 3-0 in Section 1 play. A balanced offensive attack – 164 yards rushing, 142 yards passing – and clutch drives, combined with Manheim Township’s defeat of Warwick, pushed the Bulldogs into sole possession of 1st place in the League.

Wilson junior WR Brady Gibble scored on this 55-yard pass from senior QB Anthony Futrick to give the Bulldogs a 13-0 lead in the 2dn Quarter of their win over Hempfield in the final game of the Baseballtown Gridiron Classic on Friday, October 5th, 2018.

For the second consecutive week a gritty 4th quarter performance by senior QB Anthony Futrick allowed Wilson to earn a win. The Bulldogs offense, inconsistent as usual, mounted a 17-play drive that covered 93 yards in about 6.5 minutes and culminated with a Futrick-to-Brady Gibble touchdown, That score, coming on 4th and Goal from the 9, gave the Bulldogs a 26-16 lead with 6:45 left to play. The drive essentially sealed the game, and came immediately after Hempfield got within three points, 19-16, on a 3-yard Matt Heuston TD for the Black Knights. Anthony wasn’t the only Futrick involved on the game-clinching drive. Younger brother AJ relieved starting RB Elijah Morales following the latter’s kickoff return fumble that set up Heuston’s TD run. AJ Futrick contributed 41 yards on 10 carries, most of which came on the 17-play drive

Wilson opened the scoring with a pair of field goals from Jack Wagner. The Bulldogs went up 3-0 on his 29-yarder at 5:22 in the 1st. They extended the lead to 6-0 on Wagner’s leg at the 10:23 mark in the 2nd, when the soph PK nailed a 38-yard attempt. Gibble, who caught the 4th and 9 TD, gave Wilson a nice 13-0 cushion on a 55-yard bomb midway through the 2nd. Hempfield’s Curtis Johnson connected on a 20-yard FG as time expired to conclude the first half.

The 3rd quarter was largely dominated by Hempfield, with the lone exception being a pick-six by Bulldogs junior LB Nate Hoekstra. Following that play, which gave Wilson a 19-3 lead, the Black Knights scored two TDs in about six minutes to make many of the 3,000+ in attendance a bit queasy. In the end though those same fans were sent home happy.

The Bulldogs secured the Gridiron Classic trophy with a 26-16 win over Hempfield on October 5th, 2018, at FirstEnergy Stadium in Reading, PA.

The Bulldogs hit the road next week in a monster Lancaster-Lebanon League Section 1 tilt in Lititz against Warwick. Hempfield travels to Lancaster to take on JP McCaskey.

KEY STAT: Time of possession was huge in this game and was the key to a Bulldogs victory. Wilson’s offense controlled the ball and sustained drives, maintaining possession for nearly twice as long as Hempfield (31:28 to 16:32).

PAFootballNews.com Contributor/Reporter Joe Mays is a 2003 Wilson High School alum and has been covering the Bulldogs football program since 2010. He rebooted the old WilsonTV program, The Bulldog Hour, prior to the 2015 football season and maintains a volunteer position with the team as Social Media Strategist/Outreach Coordinator/Historical Preservation Officer. Want to talk more about Wilson football or the Lancaster-Lebanon League? Find him on Twitter @CoachJoeMays or the podcast @BulldogHour.