Garcia Headed to the MAC 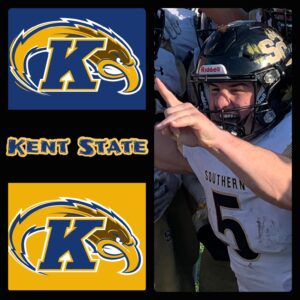 Southern Columbia has started the season with two Mercy Rule wins (combined score of 84-0) as the four-time defending PIAA Class 2A Champions are now riding the nation’s longest active winning streak of 62 victories in a row. The Tigers offensive leader Gavin Garcia has picked up right where he left off a season ago which ended with him earning the 2A Player of the Year award.

He has scored six touchdowns thus far in four different fashions and the senior can now fully focus on closing out his high school career which he hopes ends in Hershey with another title after making his college choice. The running back will join the MAC next fall as a member of Kent State.

“It feels great. I can now put the recruiting process aside and focus on just Southern Columbia football for the next few months,” said the future Golden Flash.

The three-sport Tiger star narrowed his decision down to Kent State, Harvard, and Princeton last month. After taking time to decide where his landing spot would be, he felt like the university located in Kent, Ohio was the best fit. He bonded with the Golden Flashes’ running backs coach Matt Johnson from the beginning.

“I grew to have a very strong connection with Coach Matty J and once I got to campus on a visit, every single other coach there made me feel like I was wanted and that was really what made the decision for me,” Garcia said.

Garcia’s older brother, Gaige, is a member of Lehigh University’s gridiron squad and is expected to play a large role in the Mountain Hawks’ backfield after transferring from the University of Michigan in the Spring.

The two shared the backfield together when Gavin was a freshman and a sophomore. A third brother, Garrett, was the team’s leading tackler as a freshman last season and the youngest brother, Grady, is in middle school.

“Getting to play with your brothers is something that is cool and not many people get the chance to do. As far as our program goes, Southern Columbia Tiger Football is a brotherhood, and I think that is one of the main reasons as to why our program has been the most successful in the state,” said Garcia.

Southern is now just five wins from breaking the Pennsylvania record for most games ever won in a row, and the Tigers ran their state-record regular season winning streak to 90 straight on Friday after defeating Bloomsburg.

Garcia is currently on pace to break the PIAA record for yards per carry over the course of a career, and he is closing in on 5,000 career rushing yards and 100 total touchdowns.

Most important to the team captain is the opportunity to become the first player in state history to finish a career undefeated while starting in every game of his career. A pair of his teammates that graduated last year, Jake Davis (Bloomsburg University) and Wade Kerstetter (Clarion University) were the first players to finish their careers undefeated, but neither started their freshman year.

“Probably one of the most motivating factors I’ve ever had. To be able to say I accomplished a feat that no one else has ever done is extremely motivating and will continue to drive me throughout this season,” said Garcia who wants to finish his career 60-0 and win the school’s state-record 12th PIAA Championship in December.