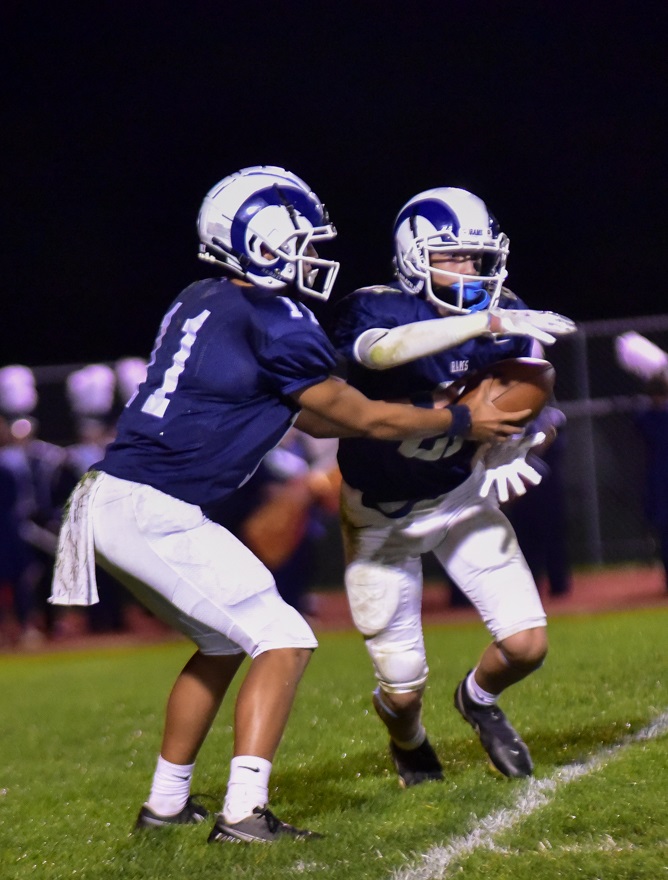 Ty Watson got things rolling for the Rams

When starting quarterback Riley Brungart went out with an injury early in the game, head coach Marty Tobias didn’t hesitate to keep him out for precaution. He just inserted Jackson Romig who played a stellar game. Romig completed 12 passes for 170 yards and three touchdowns to lead the Rams to a 41-14 win on a crisp, cool football Friday night. “Our kids are young, but they’re fighters” said Tobias of his teams winning effort. The game itself was close through three quarters with the Rams holding a 21-14 edge until the fourth quarter when Romig hit Zach Braucht, who had two td receptions, for a 22 yard td pass. Penns Valley dominated the fourth quarter.

Penns Valley got things rolling on their second series when Ty Watson scored from 3 yards out to put the Rams up 7-0 late in the first quarter. The drive itself ate up a chunk of the clock, going 55 yards on 9 plays.

Ty Watson puts Penns valley up 7-0 with this 2 yard run at the 1:16 mark in the first pic.twitter.com/LBmV7a1GQ8

It was then Romigs turn to shine. Starting with good field position at the Bellefonte 25, Romig dropped back and immediately launched a deep ball near the back of the endzone where a wide open Braucht made the easy grab to give Penns Valley a 14-0 lead with 3:57 remaining in the first half.  Give credit to the Raiders though, as with just under 2 minutes to play Nick Way hit Tyler Rice over the middle for a short pass. Way did the rest breaking left and heading down the sidelines for the 30 yard score. The kick missed but the Raiders pulled within 8 heading into the break.

Nick Way to Tyler Rice for the 30 yard td play for @BellefonteFoot1 with 50 seconds left to play in the half. Kick misses. 14-6 Penns valley pic.twitter.com/W5bhGggvKf

Taking the second half kickoff, Bellefonte was unable to move the ball and punted after three plays giving the Rams good field position at the 39, but a penalty dropped them back to the 50.  From there Romig got his second td pass of the night finding Miles Brooks over the middle. Brooks broke right and dashed down the sidelines to make it a 21-6 lead for the Rams. Again, credit the Raiders. They fought right back and, after a series of turnovers and punts by both teams, drove 35 yards to once again make it a one score game. Way extended the ball just over the goal line, then completed a pass to Dominic Capperella for the 2 pointer making it 21-14 with 9:13 left in the game.

On the ensuing kick, Micah Good returned the kick to the Bellefonte 27 and it took just one play to extend the Rams lead to 28-14. Romig and Braucht hooked up again on the same play they connected for a td earlier in the game, this time from 22 yards out and the Rams pulled away from there. Tanner Ilgen scored from 25 yards out and Mason Greene ran in from 54 yards out to cap the scoring.

Penns Valley (3-3) travels to 1-4 Tyrone next week while Bellefonte will visit Huntingdon. 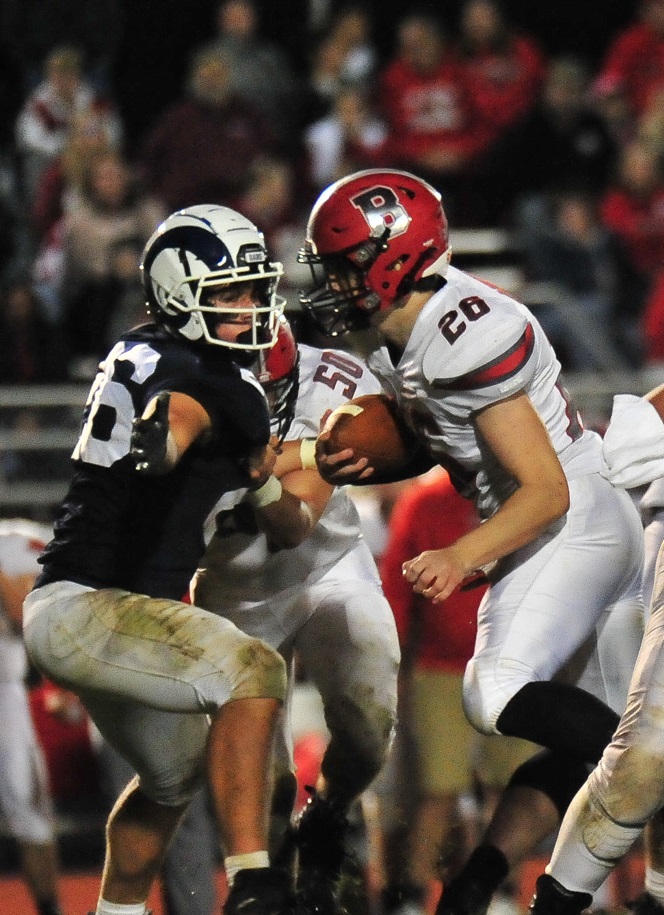 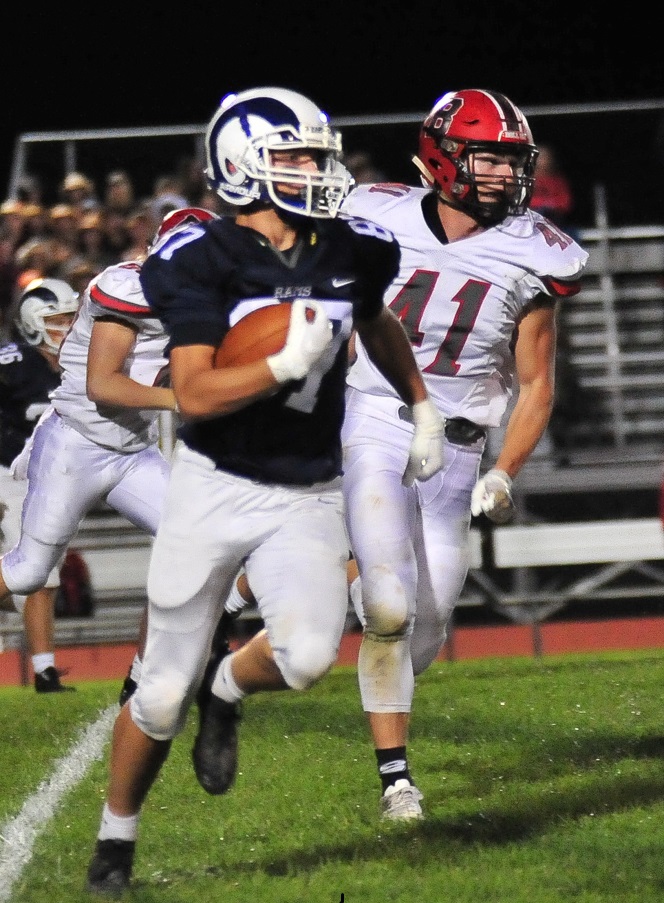 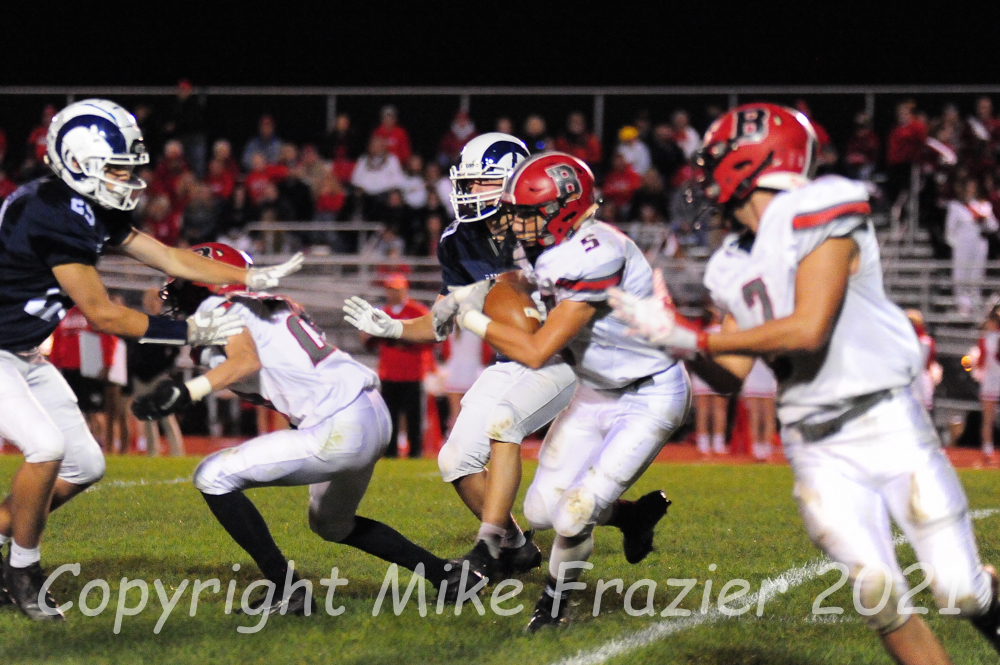