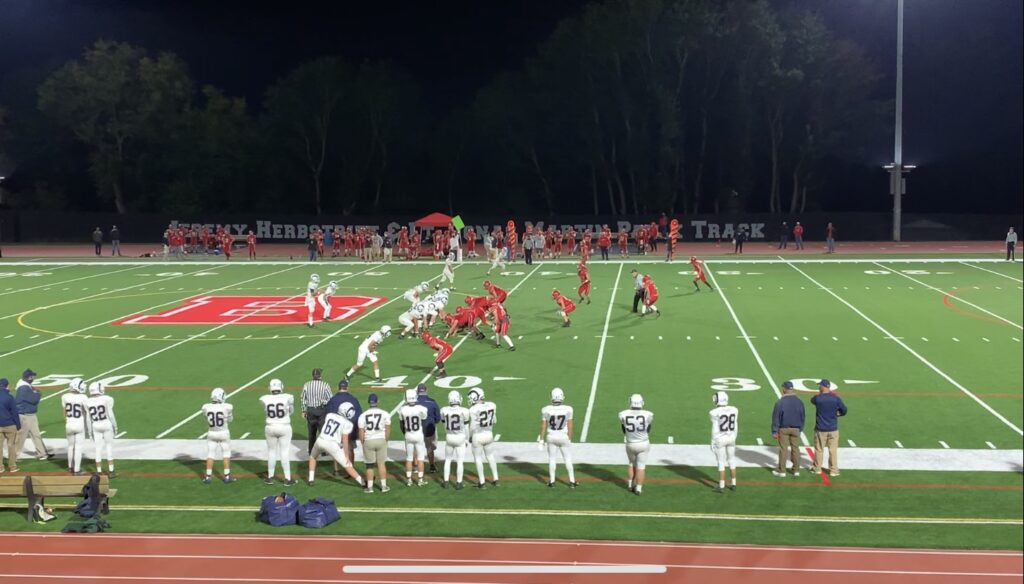 The Penns Valley Rams and Bellefonte Red Raiders faced each other Friday night in a Mountain League matchup. This would be the first time Penns Valley has seen game action due to the cancelation of the past two games due to one of the members from Clearfield testing positive for the Coronavirus. This was also the first time Bellefonte has seen game time since their matchup against Central two weeks ago. The Penns Valley Rams offense was running on all cylinders Friday night. Led by Senior receiver Stephen Ripka and Senior quarterback Aidan Brinker. Ripka finished the game with four catches for 101 yards and three touchdowns and added an interception on defense. Brinker led the Rams with 237 all-purpose yards with 148 through the air and 89 on the ground.

The Rams offense was the first to put up points in the game. On their opening drive after the Red Raiders couldn’t convert on a fourth and one. Just in three plays, Brinker found Ripka for the 45-yard score with 8:46 in the first quarter. The point-after attempt by Senior kicker Gage Ripka was good, making the score 7-0 Rams. The Red Raiders offense struggled to move the ball and were forced to punt. The Rams used this punt and from the 30-yard line used 12 plays to go 70 yards capped off with a two-yard touchdown by Senior running back Colton Winkelblech. The point-after attempt by Gage Ripka was good, making the score 14-0 Rams with 48 seconds to go in the first quarter. The following Red Raiders drive was stopped on the last play of the quarter when Ripka intercepted Red Raiders quarterback Ethan Rossman. However, the Rams couldn’t do much as Brinker threw an interception to Red Raiders Senior defensive back Logan Houser. The second quarter was a run-heavy quarter that chewed up most of the clock. Gage Ripka attempted a 37-yard field goal on a 4th down and six with 2:05 to go in the half but he missed wide left.

The Red Raiders would finally find a groove on offense but it was too late. The Red Raiders would score twice to close out the game, the first being a 21-yard strike from quarterback Logan Houser to Senior receiver Blandon Hawkins. The point-after attempt was good making the score 28-7. The second touchdown was a 13 yard rush from Houser with 2:54 to go in the fourth quarter. This made the score 28-14 which would be the final score for the night. The Bellefonte Red Raiders move to 0-3 on the year and will play Huntingdon next Friday. The Rams move to 1-1 and will face Tyrone next Friday.