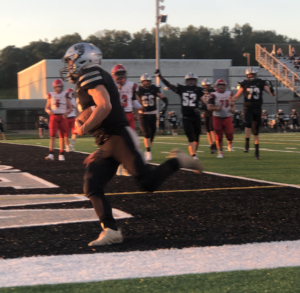 West Shamokin’s Dylan Wolfe runs in one of the Wolves’ five touchdowns against the Purchase Line Red Dragons.

Finally. After weeks of delay, Purchase Line and West Shamokin were more than ready to start off their football season Friday night against each other. It was brawl that could’ve went either way and has for years. Last year, West Shamokin lost their season opener against Purchase Line, 26-20, after the Dragons forced turnover after turnover. This year, the Wolves got the revenge that they’ve been waiting for with a 34-28 victory.

The first quarter had no shortage of action. Junior Mello Sanchez returned the opening kick to the 32-yard line, which set senior tailback Joshua Syster up for a 68-yard touchdown on the first play of the game. Syster scored again on the next Purchase Line series after West Shamokin fumbled on the kick off, and then once more in the second quarter. Leading the team in rushing yards, with 181, Syster was hard for the Wolves to stop in the beginning.

West Shamokin Head Coach John McCullough said, “Syster is one of the best backs in the conference. We were arm tackling there early on and against a kid like that, you can’t do that.”

West Shamokin’s sophomore wide receiver Dylan Wolfe scored a touchdown for the Wolves before the end of the first quarter. Elijah Linhart followed up with another touchdown early on in the second quarter. The Wolves ended the half with a pass from junior quarterback Bo Swartz to Wolfe for a 5-yard touchdown.

The second half was pivotal for Purchase Line if they still wanted to come out with a win, especially when they were on defense, up against Swartz and the rest of the Wolves’ offense. In the end, the biggest parts of Purchase Line’s downfall were penalties and missed opportunities. The Wolves came out and scored right at the beginning of the third quarter, on a run by Swartz, and just when Purchase Line had a little bit of hope on a long kickoff return by senior Dylan Overman, it was called back on a holding call.

Swartz was a huge part of the West Shamokin’s offense, running and passing the ball all over the field. Swartz said, “We knew the comeback had to start with us on offense and we just had to play with the mentality that we were never going to quit. We had to keep pushing.”

The fourth quarter was a battle of defense. Neither team could get close to the endzone and it was pivotal for the Dragons to get there.
Nearing the end, as Purchase Line was running the clock out on a drive to win the game, the ball was fumbled by the Dragons on the West Shamokin 15-yard line and recovered by the Wolves, allowing for the drop of a knee to end the game.

Purchase Line Head Coach Matthew Falisec said, “Defensively we have a lot of work to do, but I thought our team showed a lot of heart by battling until the end. Even with two minutes left in the game, we still had an opportunity to win.”

McCullough said, “It would’ve been very easy for us hang our heads there and let things get out of control. The kids didn’t waver and they kept on fighting. I’m proud of their effort and they just never quit.”