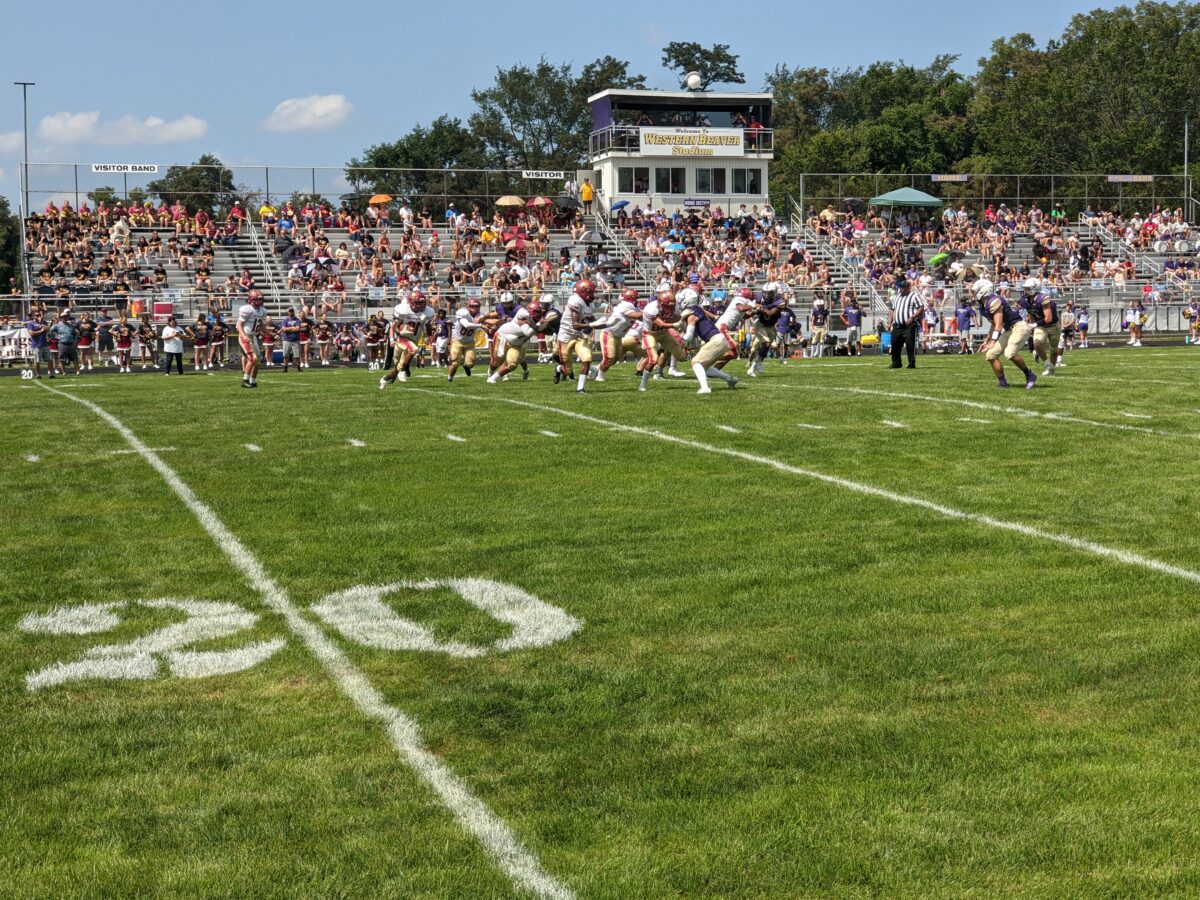 “You never know what you’re going get in the first game,” said New Brighton head coach Joe Greco. “Western Beaver has a lot of physical skill.”

On a sunny day that saw temperatures reach 90 degrees, the New Brighton Lions could care less as they braved the heat and a fourth-quarter deficit overcome the Golden Beavers.

“We started slow. We came back in the second half and rallied together,” said Ramsey. “We got our offense in check, and our defense stayed strong.”

Faced with a third-and-goal from the 1-yard line, New Brighton lined up in power formation, and junior tailback Kevin Williams muscled in for the game-winning touchdown.

“This senior group has dealt with adversity like that for the last four years, said Ramsey. “This win today feels amazing. Every time we got down, we were ready to get back up and after them.”

The Lions’ defense had done what it had done all second half and stopped Western Beaver on downs to begin overtime.

New Brighton sacked Golden Beavers quarterback Xander LeFebvre on second-and-goal back to the 14-yard line. LeFebvre never came back into the football game.

Thaddeus Gray entered the game under center but saw his fourth-and-goal passed batted away in the end zone.

“In a game like this, nobody wants to lose, but somebody has to, and today it was us,” said Western Beaver head coach Ron Busby. “We have things we need to get better at. We learned our lesson today.”

The fact that the Lions made it into to overtime period was in question late in the third quarter.

The Lions drove nearly 70 yards and chewing most of the third-quarter clock. New Brighton looked poised to take the lead.

On second down inside the 10-yard line, Kevin Williams was stripped by Dorian McGhee, who returned the fumble 97 yards for a touchdown that put the Golden Beavers in front 20-14 with 62 seconds to play in the third quarter.

“They made some plays against us, including the scoop and score,” said Greco. “But I’ll tell you what, we have a lot of guys that stepped up and made plays today when it mattered most. I couldn’t be more proud of this football team.”

As they had done twice before, New Brighton answered the call tying the game 10:33 to play on Gabe Haddox’s 37-yard touchdown pass on fourth-and-twelve to Eric Montanez.

Dorian McGhee led Western Beaver with three catches for 123 yards and the game’s first touchdown on a 58-yard pass from Xander LeFebvre.

Just over a minute later, the Lions answered the score with Keandre Williams scoring on a 15-yard run. Haddox’s 56-yard pass Montanez was the drive’s big play.

Western Beaver took the lead right back as they got a good kick return by McGhee.

One play later, LeFebvre ran an option keeper 41 yards for a touchdown.

“We had our chances today. We got up on them three times and let them drive downfield for the tying score,” said Busby. “Ultimately, they capitalized on their chance. We did not.”

LeFebvre completed 5-of-12 passes for 139 yards with a touchdown and an interception while also rushing for 46 yards and a score on 14 carries.