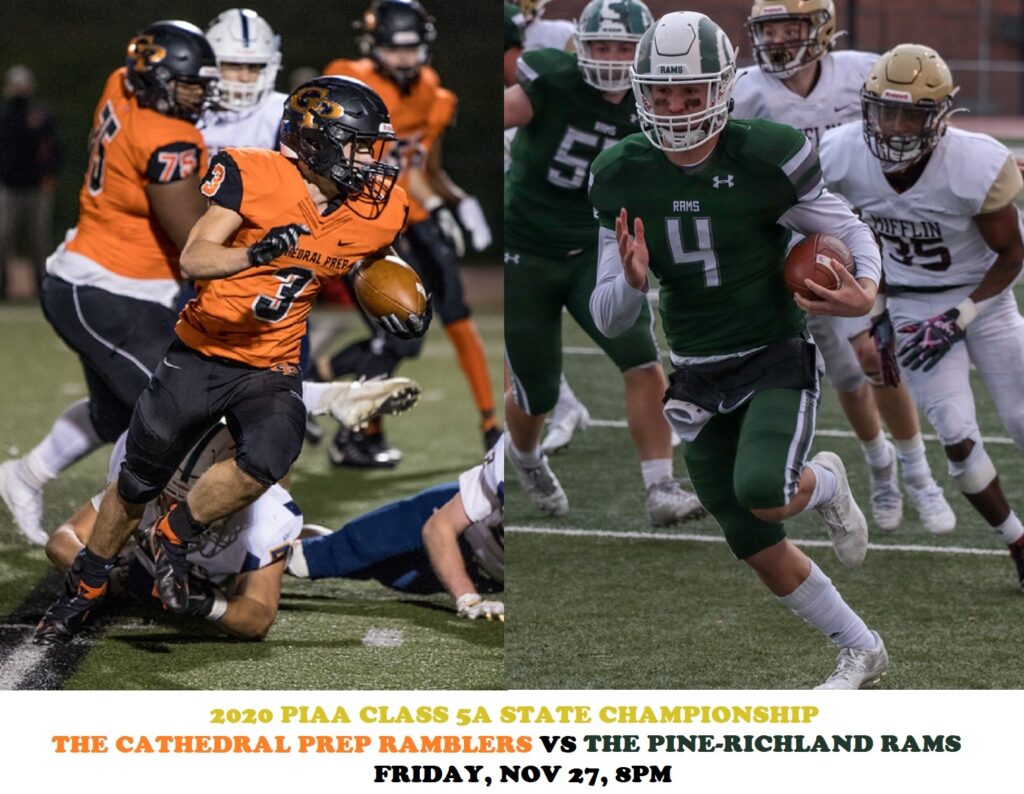 Pine-Richland is coached by Eric Kasperowicz (84-18) and for the school it’s their 4th championship game having won in 2017.  Cole Spencer makes the offense go for the Rams, a team that averages 48 points a contest.  He has tossed the agate for 2,448 yards and 32 touchdowns.  He is a dangerous runner too as proved last week on his game winning 54-yard dash.  Spencer, Caden Schweiger, and Brooks Eastburn have a combined 21 TDs running with the pigskin.  Career receptions and yardage leader for PR, Eli Jochem, has 57 grabs for 1,109 yards and 17 scores.  Luke Miller and Charlie Mill have combined to catch 11 more TD tosses.  Another interesting stat is that P-R has only punted 7 times all year!

Miller leads the team in tackles and is the all-time leading tackler at PR.  Zach Waryanka is second in take downs of opposing ball carriers.  The team has 93 tackles for losses.  The Rams also have 41 QB sacks as a team and Miguel Jackson has the most with 13.

The Ramblers have a nice set of skill players, the key is to get them rolling after being off for three weeks. Tamar Sample has some skill and can chuck the rock having thrown for over 1000 yards in their short season.  Jaheim Williams and

The Ram high-octane offense cannot turn the ball over 5 times like they did last week and expect to win again.  They must protect the ball and execute.  They are going to score.  No one can stop them consistently.  And they will wear Prep down as the game goes on because of their up-tempo offense.  They just need to focus, execute, and finish drives.  One more thing, the offensive line needs to protect the quarterback.  Cole does get rid of the ball quick, but Erie may throw some blitzes and whatnot to pressure him.  Therefore, protecting your all-state QB is essential.

Pine-Richland has a tremendous defense, but because of their offense people don’t seem to notice.  Governor Mifflin’s coach did though.  The defense needs to get a couple turnovers and keep the Ramblers from controlling the clock with methodical drives.  They also must be aware of Prep’s speed and not get burned.  If they can contain the Rambler running game and force them to pass, they have an excellent shot of winning this game. Luke Miller has gone to the next level in the playoffs. He had 24 tackles last week to go along with his TD catch.

Again, SHAKE OFF THE DUST!  The Ramblers haven’t played a game in three weeks. They’ll likely need some help from their defense as they do so. They’ll also want to follow the model Governor Mifflin used last week, control the ball and pound at that Rams defensive line. Once they get their groove back, getting Williams going will be important. Hold the ball. The Rams were opportunistic last week and have been all season

Keep the game in front of them. Spencer can pick apart a defense in a hurry. They’ll need to play tight coverage and get the defensive line, led by nose guard Mehki Twillie, into the backfield to disrupt the offense of Pine-Richland