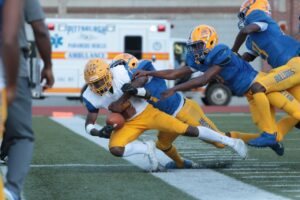 Westinghouse had one final hurdle to a regular season title in the Pittsburgh City League entering Friday afternoon’s game with winless Carrick. The Bulldogs responded with a dominating 57-6 victory, claiming the regular season City League title with an undefeated record.

On their opening drive, Westinghouse found paydirt after Keyshawn Morsillo hit Darius Bruce for a 65 yard TD pass just two minutes into the game. The PAT was no good and the score stood 6:00 with 10:17 to go in the opening quarter.

Morsillo to Bruce 65 yd for a House TD. Kick no good. 6-0 with 10:17 first. Carrick only has 14 players dressed. Lowest amount of the season for them. @PaFootballNews pic.twitter.com/Xbr1pBcYGT

After a penalty to start their drive, freshman Az’Juan Marshall took a pitch and reversed the field for an 18 yard gain, but the Raiders were unable to move the stick. After failing on 4th down from their 20, Harris carried 20 yards on the first play to extend the House lead. Sophomore Cruz Bradbury added the PAT, his first successful one of the season, extending the lead to 13-0.

Carrick fumbled on their first play and Emilio Valentine recovered. Harris carried 8 yards for a TD and Bradbury hit another PAT to extend it to 20-0. After a 3 and out, Carrick punted—Bruce took the punt back 50 yards for a ‘House TD. The PAT was no good and the score stood 26-0 with 3:59 to go in the first.

Carrick punted after another 3 and out series, and several plays later, Morsillo hit Sincere Smith for a 17 yard TD pass to make it 33-0 after Bradbury hit another PAT with 1:18 to go in the first.

Early in the second, Kairon Collins carried 39 yards for a TD to push the score to 39-0 and bring running time. Collins added another TD to make it 45-0 midway through the second. Carrick broke through on the ensuing kickoff as freshman Az’Jaun Marshall took the kick back 72 yards for a Carrick touchdown to make the score 45-6 with 4:07 to go in the second. 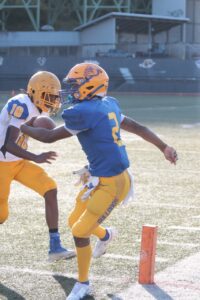 King for the score Photo Dreamshotsmedia

In the third, Jairon King added a 25 yard TD run. Bradbury’s PAT was no good, making the score 57-6 after 3 and remained the final.

Westinghouse: Westinghouse did the job that they needed to do and were fully expected to do. Their offense was electric as usual and the defense swarmed an undermanned Carrick team. The City Playoff stands next and the House is in good position for their second City League title in a row.

Carrick: The Raiders struggled with numbers issues as the season wore on, but the players who finished out the game should be proud of their commitment and dedication. I got to speak to a few of their coaches today and they’re hopeful that next year can bring about a more traditional pre-season and in-person experience to build a more solid foundation and keep players for the long term. 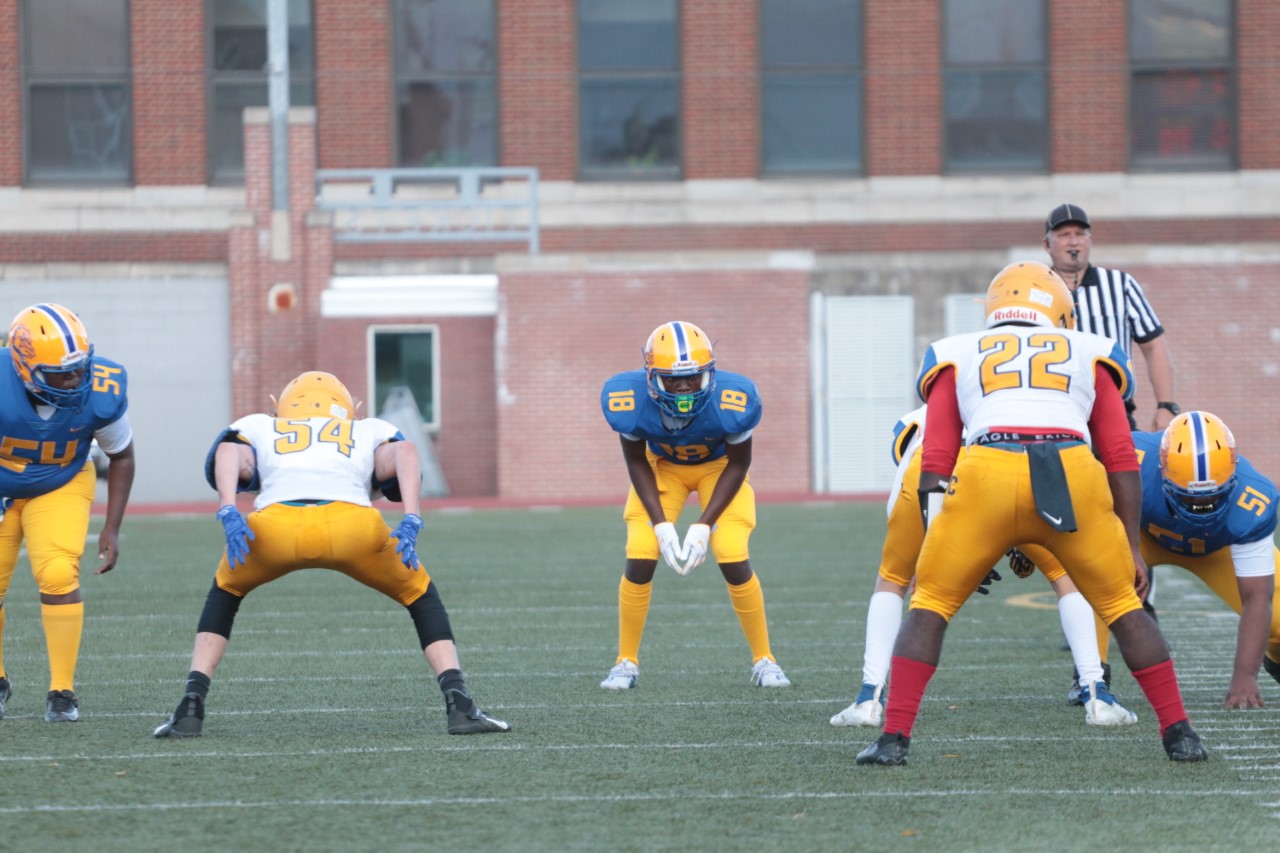 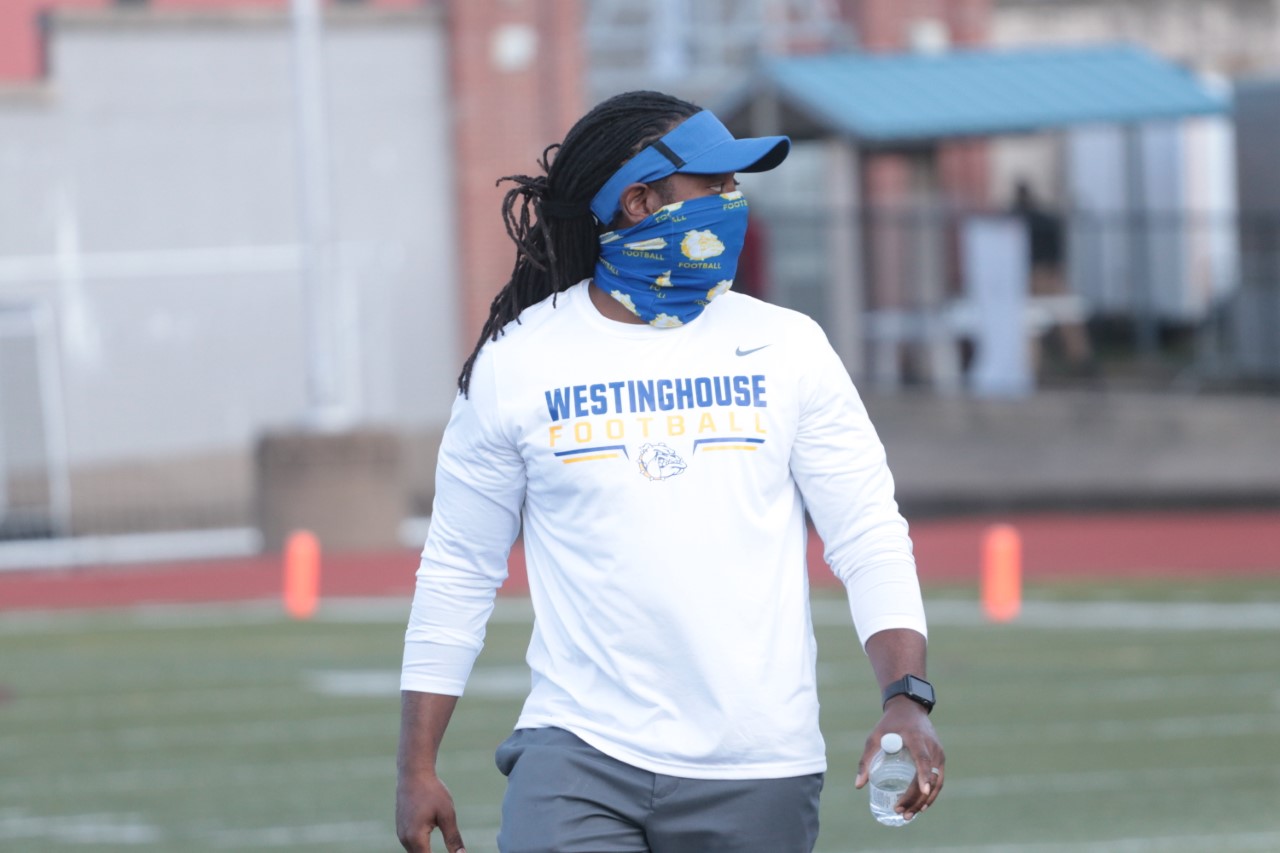 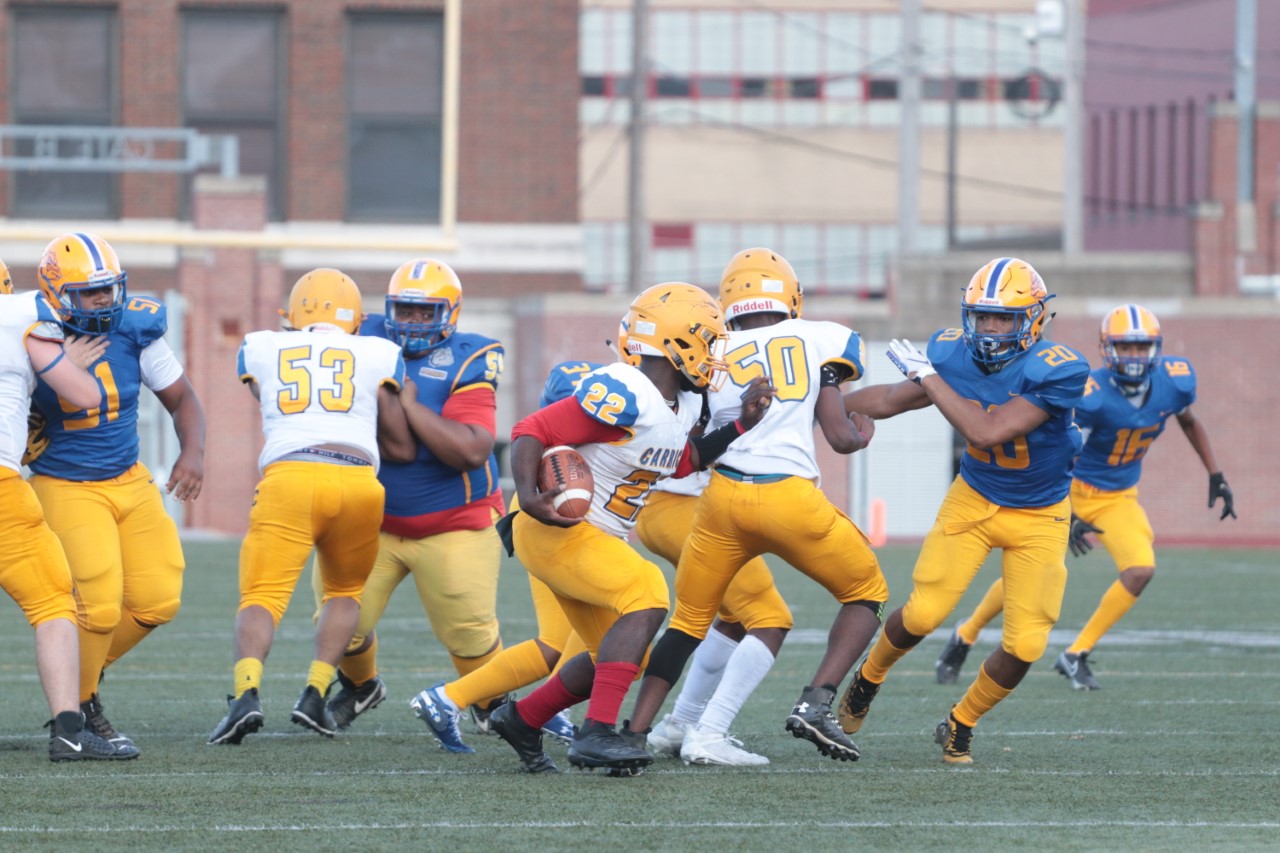