The Redbank Valley Bulldogs defeated the Smethport Hubbers 20-6 at Brockway’s Frank Varischetti Field Saturday afternoon to capture the 1A District 9 championship trophy.  They did it with a stifling defense that held Smethport to a grand total of 133 yards.  The Hubbers came into the game averaging 366 yards of offense per contest.  “We felt that if we could get three scores we were going to win the game.  We’ve prided ourselves on defense all year,” declared Redbank’s head coach, Blane Gold. 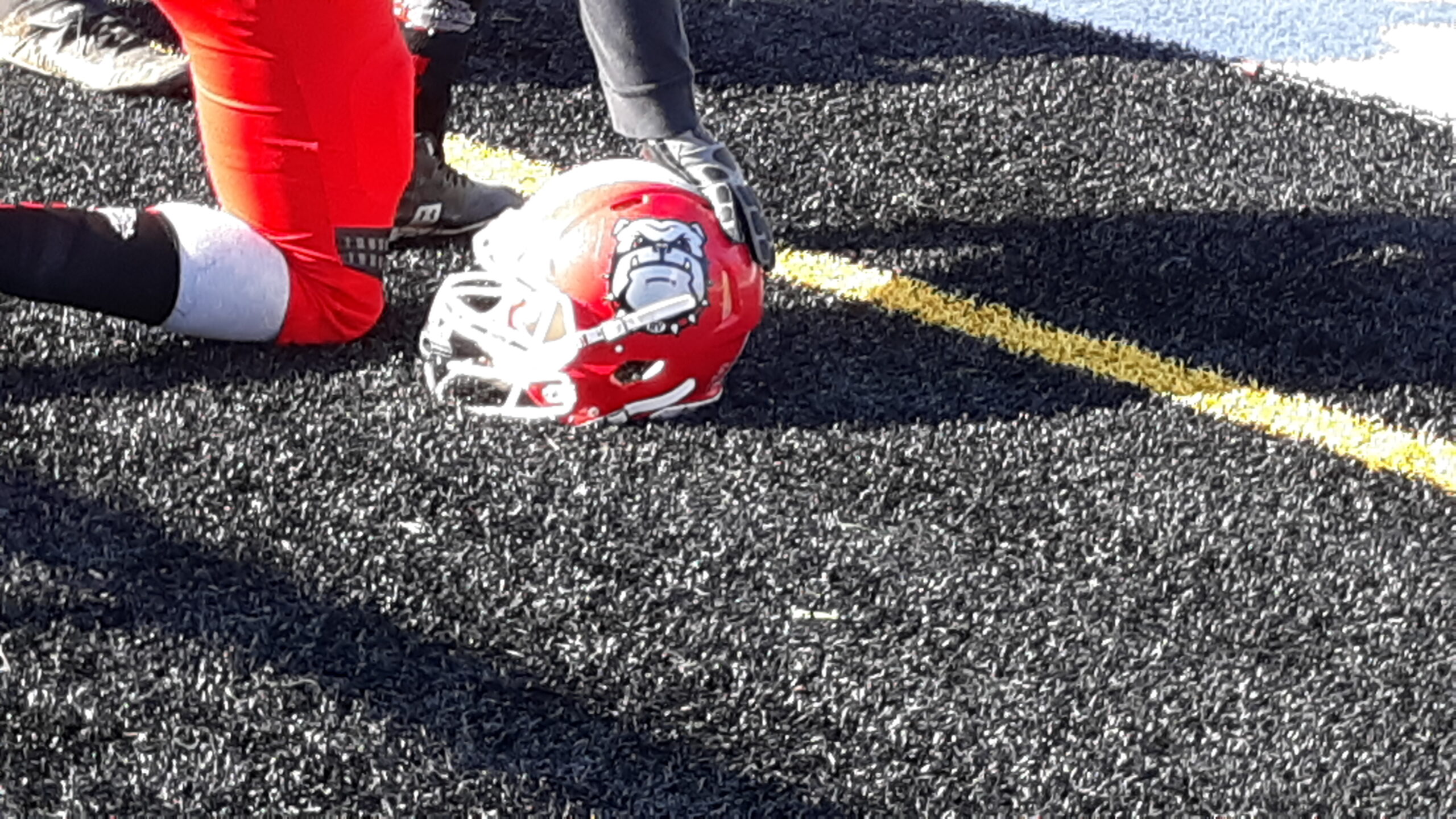 All the scoring was in the first half with Smethport seizing the early momentum, but things would unravel quickly for the Hubbers beginning in the last 4 minutes of the first quarter.  That is when the momentum decided to switch allegiances and the Bulldogs rode that ship throughout the second quarter and the game for the most part.  Smethport’s head coach, Adam Jack stated, “Things didn’t go our way in the second quarter at all and we weren’t able to overcome that in the second half.”

As stated, Smethport had a great first eight minutes of the game.  The Hubber defense forced a three and out on the game’s first possession.  Starting at the Redbank 47 after the Bulldog punt the Hubbers, in 7 plays, slowly marched to the RBV 10.  On the 8th play of the drive QB Noah Lent connected with Brandon Higley for the touchdown and the lead.  The two-point conversion failed but Smethport grabbed the early 6-0 lead with under six minutes on the first period clock. 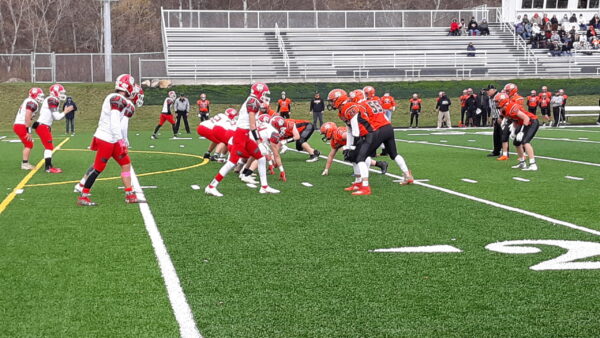 Smethport’s Logan Christie intercepted Cam Wagner’s pass on Redbank’s next drive giving the Hubbers the ball at the their own 40 at the 5:03 mark.  But on the second play, Lent’s pass was picked off by Aiden Ortz putting the ball back into Redbank’s hands at the Hubber 40 and snuffing out the Smethport momentum.

It took RBV four plays to get on the scoreboard.  QB Gunner Mangiantini slipped a pass to Christopher Marshall in the middle of the field for the 25-yard TD and Landon Pence booted the PAT to put the Bulldogs up by one, 7-6 with 2:23 remaining in the first quarter.

Ryli Burritt appeared to return the subsequent kickoff for an 80 something yard touchdown, but a block in the back nullified the score and that seemed to take the rest of the wind out of the Hubber sails for the first half.

All of a sudden, no matter what they did, Smethport couldn’t move the football.  After driving 47 yards on their initial possession of the game, they only mustered 15 yards the rest of the half.  Meanwhile, Redbank started moving the ball efficiently with traps and some sprinkling of passes.  On their next possession, the Bulldogs began at their eighteen and steadily drove down field scoring on Mangiantini’s four-yard run.  The extra point was good and at the 6:40 mark of the second RBV increased their lead to 14-6.  The big play in that possession was a half back pass from Marshall to Marquese Gardlock for 39 yards.

The Redbank Valley offense scored on their third straight drive later in the quarter when Mangiantini hit Marshall again, this time for an eight-yard touchdown toss with 2:14 remaining in the half.  Coach Gold elected to go for two at this point, but the attempt failed and the RBV lead was 20-6 which carried into the intermission.

The second half for Redbank, offensively, was uneventful as they could only muster 91 yards and the majority of that came on two plays. A 19-yard pass to Trenton Rupp and a Mangiantini 33-yard scramble.  Defensively, the Bulldogs had to defend the yard.  All three Hubber drives ended up in Bulldog territory, but the Redbank ‘D’ stood tall snuffing out each threat.

4th quarter action from Redbank Valley – Smethport. The Hubbers do not score even though they have a first and goal as a result of this play. @PaFootballNews @RVBulldogs @HubberFootball pic.twitter.com/F9VMKAbmZV

On the first Hubber drive of half two, Redbank held on downs at their own 38.  On the second Smethport possession, when the Hubbers had a third and five at the RBV 43, Joseph Mansfield sacked Lent.  That was Mansfield’s second sack of the game.  The last Hubber second half drive started at the Redbank 41 following a fumble.  Eventually, Smethport had a first and goal at the three.  But then a three-yard loss, an incomplete pass, another sack (this time by Ray Scheckengost), and another incomplete pass thwarted yet one more endeavor by the Hubbers.  From that point the Bulldogs were able to move the ball enough to run out the clock and claim the D-9 1A Championship.

Notes and Quotes: “Redbank Valley has been playing good defense all year.  That’s no secret.  They did a great job today taking Noah (Lent) away from us in the run game,” stated Jack.  Lent was 5 for 15 passing for 52 yards and a pick.  He ran 21 times for 51 yards.

Near the end of the game Smethport’s Trevor Zuver was injured and taken by ambulance to the local hospital.  Later in the evening reports indicate that he went home and scans and x-rays were negative.

Redbank now 6-0 advances and will face the District 5 champ, the Northern Bedford Panthers next week at a site and date yet unknown.