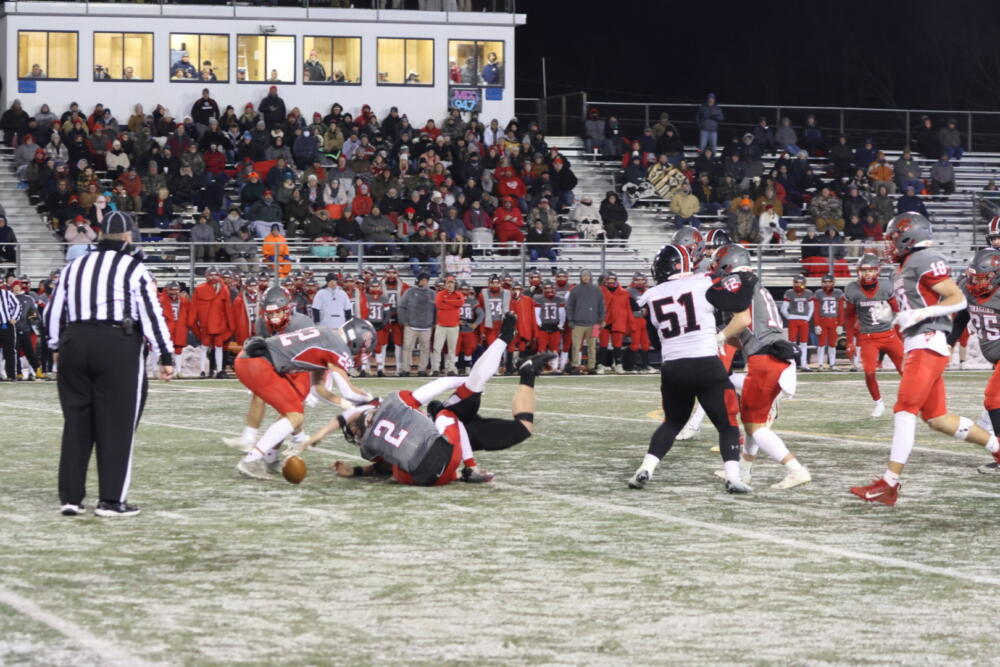 Clearfield had trouble holding on to ball.

Dragons soar pass Bison to advance to the elite eight!

Central had the big name quarterback(Jeff Hoenstine), played in a tougher conference(LHAC) and practically had home field advantage(Hollidaysburg), so the visiting Clearfield Bison needed to win the turnover battle. They didn’t and Central of Martinsburg will advance to the quarterfinals next week against Grove City. The Bison never gave up but were unable to keep up with the Dragons.

Jeff Hoenstine who reminds me of one of my favorite quarterbacks, Doug Flutie threw for three touchdowns and ran for one more in a 35-6 victory. Hoenstine a great scrambler with a very strong arm didn’t have to scramble much as his offensive line did a good job and the Dragons settled for a lot of short passes. The field conditions were cold and icy which you might have thought would have helped the Bison who like to run the ball. Hoenstine and the Dragons used short passes to move the chains all night as the Bison coaches kept pleading for their defensive backs to get within five yards of the Dragons receivers. When they would Hoenstine would go over top for a big play. Hoenstine unlike a lot of high school quarterbacks is able to throw the long out patterns making the Dragonstough to defend.

The Bison came into the game hoping to run the ball and control the clock in order to keep Hoenstine off the field. They came out and picked up a couple of first downs on a nice opening drive. On fourth and nine from the Dragons 36 they decided to punt and play field position instead of going for it. The Dragons would make them pay, marching 88 yards in just under five minutes with Hoenstine carving up the Bison secondary. The Dragons would struggle to run the ball all night but Hoenstine accuracy was more than enough for Central to move the ball. Hoenstine hit Elijah Lingenfelter for the first of his two touchdowns and it was 7-0 Dragons with three and a half minutes left in the first quarter. Lingenfelter would have a big game. He had 6 catches for 120 yards in the first half.

The Bison needed to respond but went three and out. This time the Dragons would drive 61 yards in two minutes. Lingenfelter had two big catches on the drive and capped it with his second touchdown reception. The next three possessions saw three interceptions.  Lingenfelter and Dalton Metzger intercepted Bison quarterback Jacob Samsel. Colton Ryan picked off Hoenstine on a deflected pass. The Dragons would than drive to the Bison three yard line where on fourth down, looking for the knockout punch they would throw incomplete. The Bison were able to get to the locker rooms only down 14-0 as they were able to run out the clock thanks to a running into the punter penalty.

The Dragons started the second half with two penalties and were forced to punt for the first time in the game. The Bison had their best starting field position of the game at their own 49. But would fumble the ball back to the Dragons 41 seconds later. Jason Clark made the recovery at the Central 30. Again penalties killed the Dragons drive and they had to punt. It was a great punt and was downed at the Bison one yard line. Three plays later, it was fourth and one from the Clearfield ten yard line with just over three minutes to go in the third quarter. Head Coach Tim Janocko knew he was running out of time and rolled the dice. They tried to run for the first down but the Dragons were ready and stuffed the play.

That was all the Dragons needed to get them going again. On the next play Hunter Smith ran it in from ten yards out. On Clearfield’s next series they again went for it on fourth and seven from their own 43. The Dragons swarmed in and sacked Samsel at the 33. Central would take 31 seconds to cover the distance. Hoenstine sneaking it in from a yard out on the first play of the fourth quarter. The Bison would go three and out and punt. The Dragons needed two plays to go 40 yards. Hoenstine’s third touchdown pass, this one to Dalton Metzger started the mercy rul with 10:36 to go. In less than two minutes of playing time, the Dragons offense cover 83 yards in 49:seconds of possession. The Bison starters would go on a six minute drive against the Dragons backups. Brady Collins would run it in for the Bison. Final score Central 35 Clearfield 6. 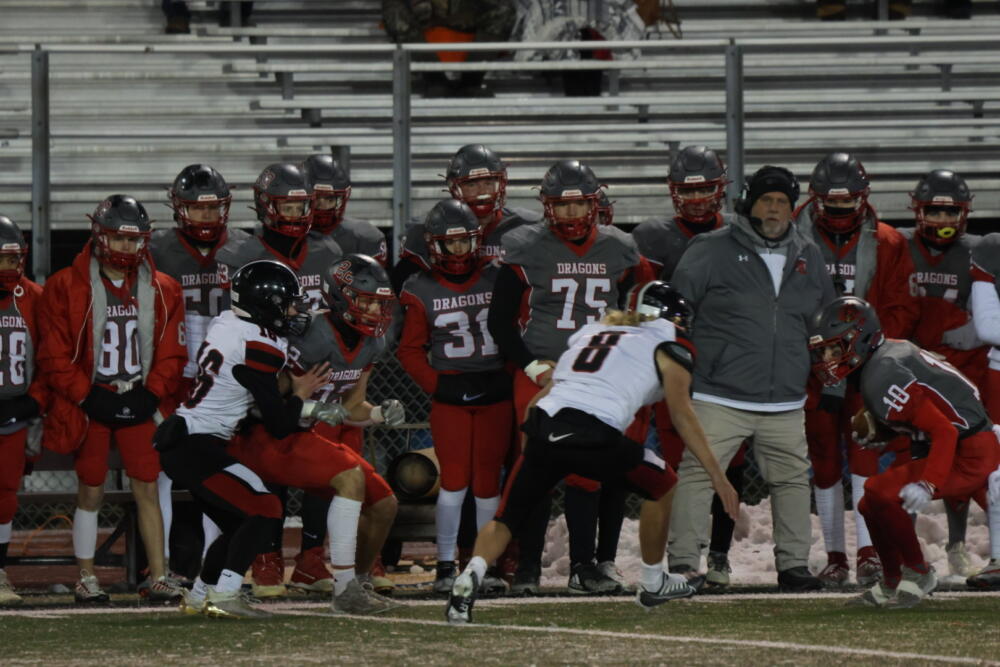 Hoenstine had choice of receivers. 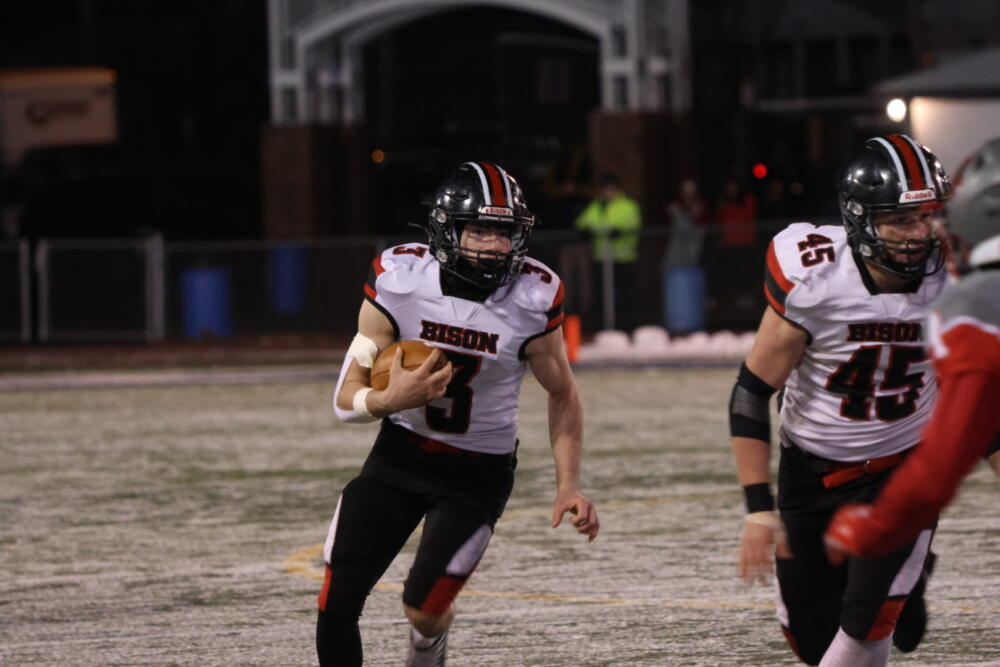 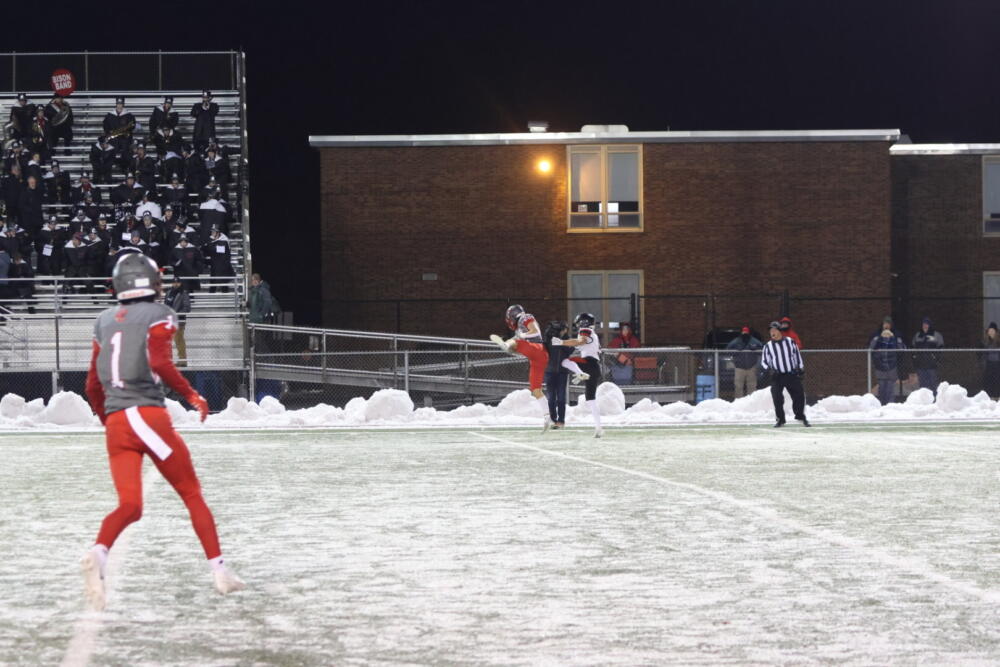 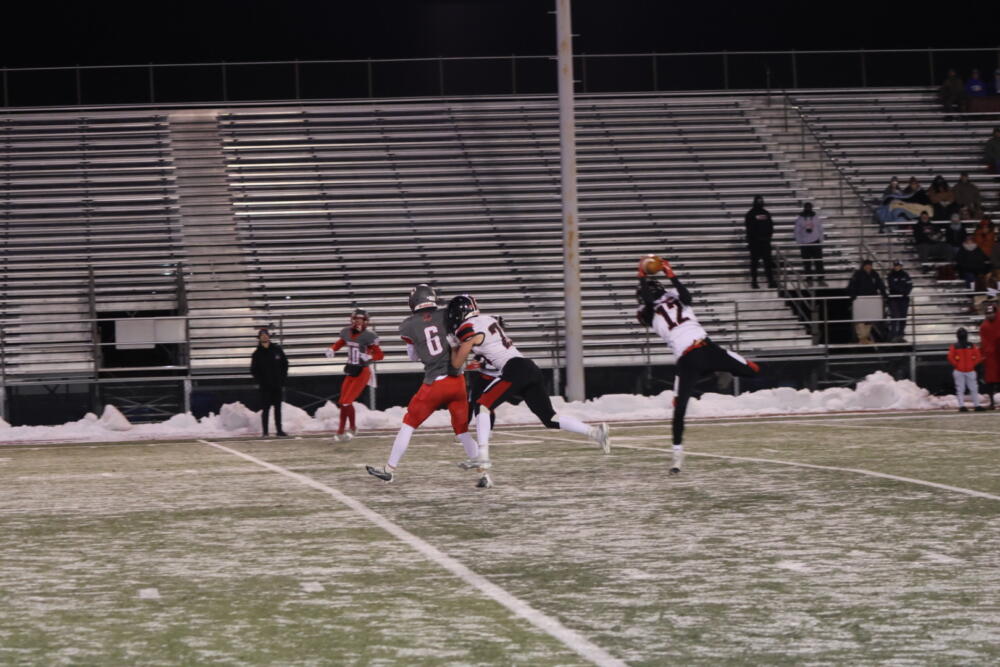 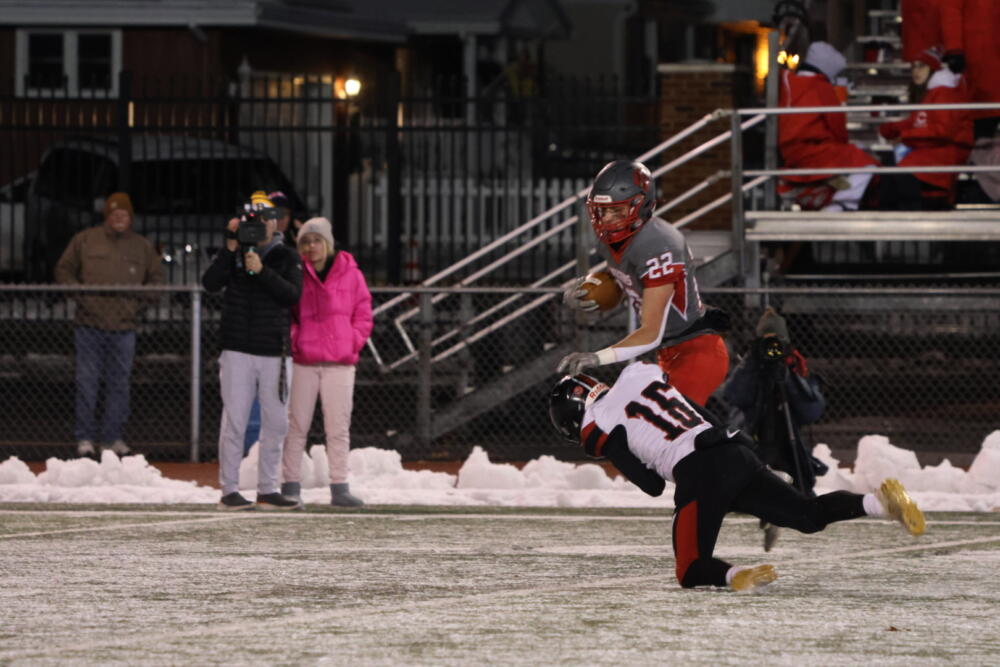 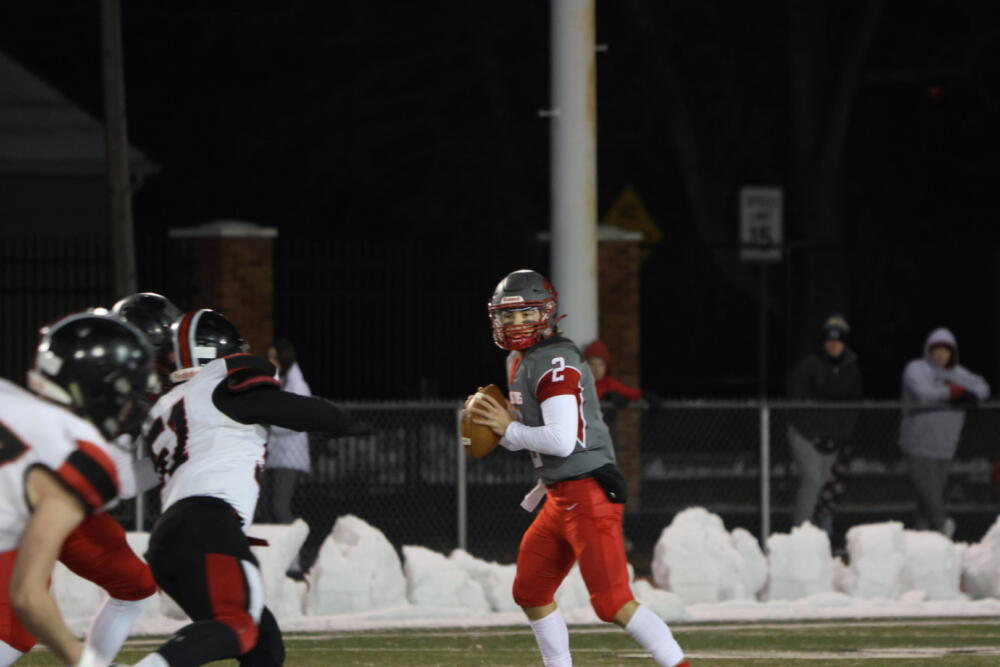 Hoenstine had time to throw and three touchdown passes to show for it. 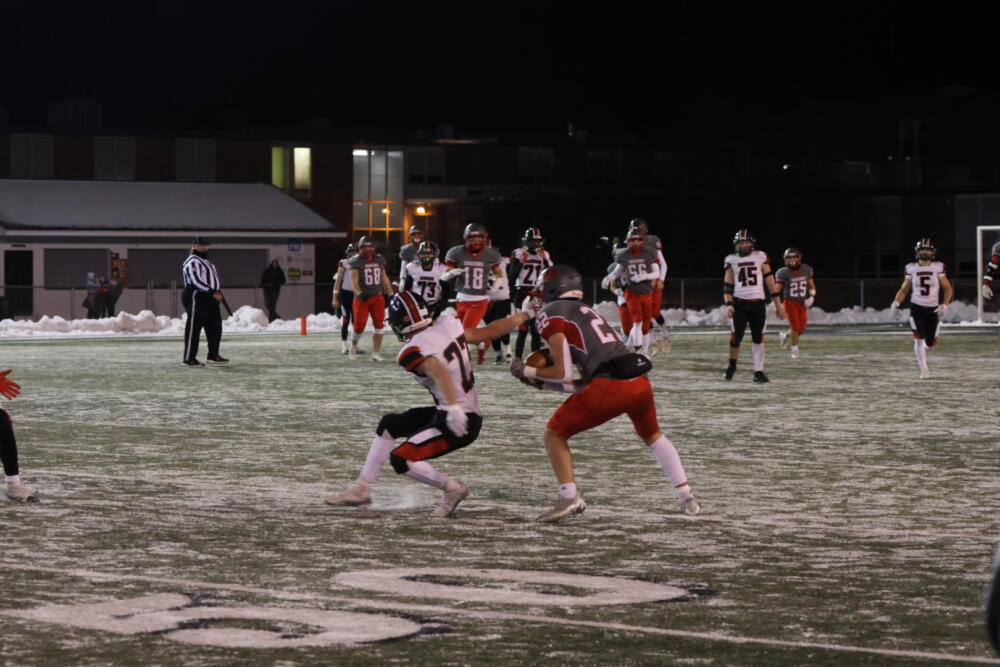 Lingenfelter was open and scored twice. 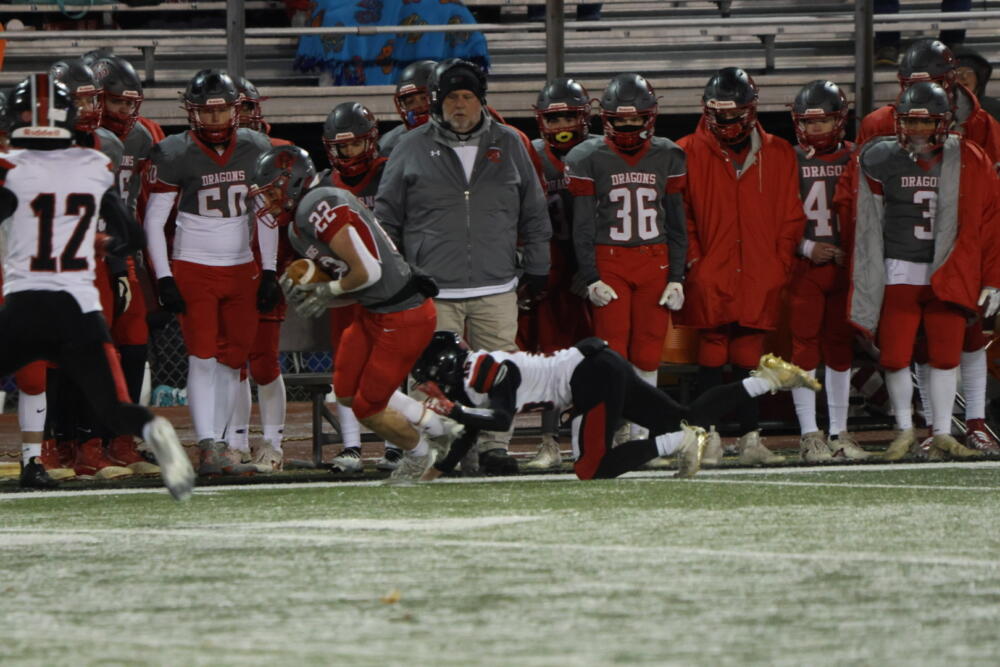 Clearfield had trouble holding on to ball.