While football is the epitome of a team sport, sometimes an individual has a performance that lends one to believe that the team sport thing just isn’t so.  Last night in Brookville in the District 9 AA semi-final between Ridgway and Brookville Jack Krug was that guy.  All Mr. Krug did in leading his Brookville Blue Raiders to a 49-15 victory was throw for 5 touchdowns, run for a score, and catch a pass for still another TD.  In other words, he had a hand in all 7 of Brookville’s touchdowns.  In one way or another, he accounted for 501 yards of the team’s 531 yards for the evening.  That is truly remarkable. 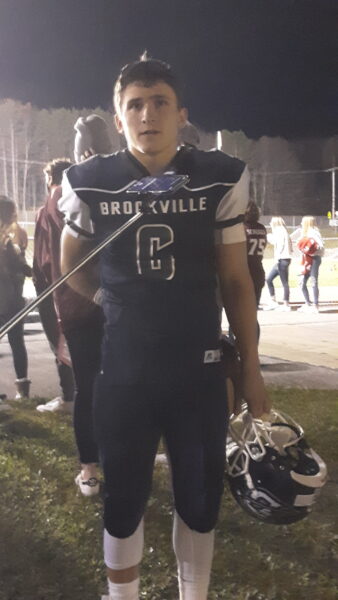 Jack Krug speaking to media after the game.

On the first play of the game, Krug connected with Kyle MacBeth for a 33-yard completion.  Three plays later facing a 4th and 7 situation the talented quarterback dropped into the pocket and then fled downfield 44 yards for the game’s first score.  Hayden Kramer booted the point after and with less than two minutes gone Brookville led 7-0.  “Teams usually try to contain me from getting outside and when the middle was flushed, all I saw was green grass.  Usually when I get into the open, they’re not going to catch me,” Krug stated when asked about the play.  Krug was a member of Brookville’s 4X100 meter relay team that placed second in the states in 2019.

Ridgway countered by going on a 16-play 74-yard drive to the Raider 6, but a 4th down pass fell incomplete to end the threat.  The drive was highlighted by a successful run on 4th down by quarterback Ben Briggs and later a 24-yard pass by Briggs to Camron Marciniak.  The drive took 8 minutes and 55 seconds off the clock.

On Brookville’s next two drives Krug threw touchdown passes of 65 yards and 50 yards to Brayden Kunselman and Robert Keth respectively.  Then Ridgway scored when Briggs hit Dominic Cherry for a 34-yard TD to cut the lead to 21-7 after Luke Zimmerman’s PAT.  Facing a punting situation on the Blue Raider’s 4th possession Coach Scott Park went to some trickery.  Even though Brookville led they did not want to let Ridgway catch some momentum and have a chance to get back into the game.  Keth lined up to punt and Krug lined up as the long snapper.  Keth subsequently found Krug wide open.  From there it was a foot race Ridgway was not going to win.  “That was the first touchdown pass catch in my life,” said the elated Brookville signal caller.

After that it was back to normal as Krug tossed 3 straight TD passes, two more in the first half to Ryan Daisley and then Braedon Davis.  Davis’ TD was with 2:29 remaining on the second period clock and put Brookville up 40-15 at half time.  Krug’s final TD pass came early in the third quarter and covered 23 yards when he hit Daisley again.  That touchdown made the 7th straight possession that resulted in a Blue Raider score.  “We thought we could throw on them.  We thought we could handle them up front and get the ball downfield,” Coach Park commented after the game.  Brookville threw on 21 of their first 27 plays and Krug’s touchdown run was supposed to be a pass. 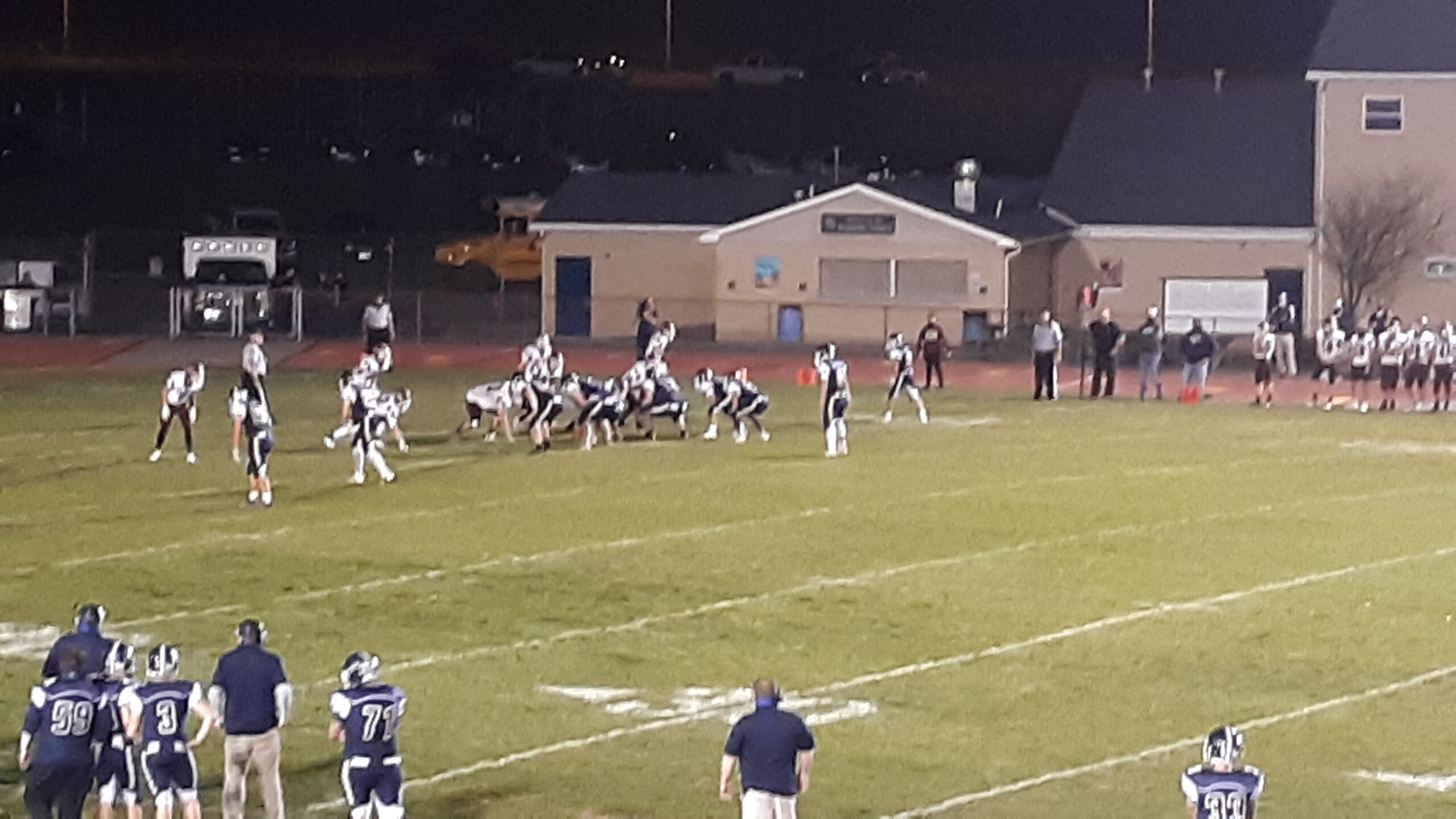 Brookville getting ready to score again.

With Brookville now up 47-15, Coach Park eased off the gas for a couple series before substituting the second teamers in for the balance of the game.  The Blue Raider tacked on a safety with less than 3 minutes left in the game when Joe Shields tackled an Elker ball carrier in the end zone.  Brookville’s defense had a good night as they forced 4 Ridgway turnovers with Charlie Krug and Keth snagging interceptions, while Jack Knapp recovered one of the fumbles.

Ridgway’s other highlight saw Zimmerman field a kickoff near his own 12.  Finding a seam and some space, he galloped 88 yards for the Elker’s second and final score of the night.  A successful two-point conversion by Marciniak cut the Blue Raider lead at the time, with 3:29 left in the first half, to 33-15

Krug’s final stats were 386 yards passing, 56 yards rushing and 59 yards receiving.  Keth caught 6 passes for 182 yards and the one score.  Kunselman snared 4 passes for 120 yards and a touchdown.  For Ridgway, Ben Briggs had 191 yards and 1 TD passing with Cherry on the receiving end of the scoring toss.

“We wanted to come out and get on them early so they would have to get out of their game plan.  We have some banged up guys we wanted to get out as soon as we could,” stated Park.  When told that the win was Brookville’s first playoff win in 10 years, Coach Park replied, “For me, it’s my first, for the program it’s big.  We want to get back to where we’re contending every year.”

Brookville will now play Karns City, a 34-9 winner over Central Clarion, for the D-9 AA title next Friday night in Brockway.  The Blue Raiders dominated the Gremlins earlier this year by beating them 44-0.