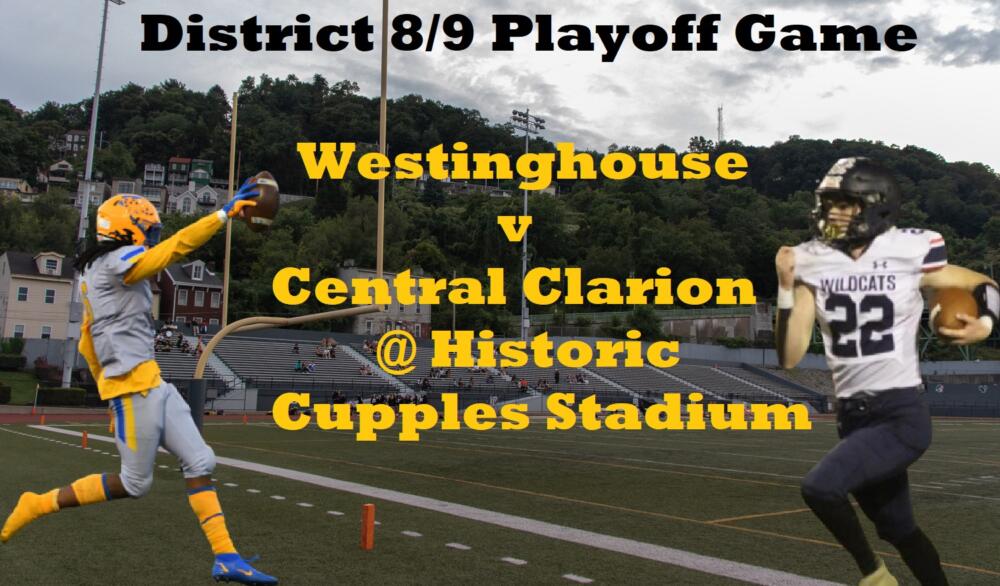 Central Clarion is the District 9 champs by virtue of their 35-0 victory over Brookville last week.  Westinghouse won the Pittsburgh City League title and represents District 8 in the 2A playoffs.  The Bulldogs scored a surprisingly easy win last week against District 5’s Berlin-Brothersvalley 59-7.  Berlin had been undefeated, giving up a measly 39 points all year.  Westinghouse averages 47 points a game and only allows 8.  Central Clarion scores 40 points per game, and permits 15.

The C.C. Wildcats have quite a passing attack led by a sophomore quarterback and a senior wide receiver.  Jase Ferguson has accumulated 2,638 yards passing with 32 touchdowns.  Ashton Rex has pulled down 58 of Ferguson’s passes for 1,516 yards and 13 TDs.  The other receiving threat comes from Dawson Smail who has 26 receptions for 505 yards and 7 TDs.  Connor Kopnitsky has rushed for 10 touchdowns and Ferguson 7 as the Wildcat running game shows almost 1,800 yards for the season, with Kopnitsky having 624 of those.  Ryan Hummel has brought down 134 opposing ball carriers in 2022 to lead Central Clarion’s defense in tackles.  Braylon Beckwith is second with 92.  The C.C. defense has forced a whopping 39 turnovers in 11 games, led by Ferguson’s 6 interceptions and Dawson Hotchkiss’s 3 fumble recoveries.

Westinghouse is the #2 team in the state behind Farrell.  They are loaded with lots of talent and speed.  QB Keyshawn Morsillo can do it all.  He’s pitched the pigskin for 2,155 yards and 31 touchdowns.  Morsillo can run the rock too, as he has 601 yards and has scored 11 TDs.  His favorite target when throwing is Sincere Smith.  Smith has hauled in 35 passes for an amazing 1,129 yards (that’s 32 yards per catch).  He has also crossed the goal line 19 times.  Davon Jones is no slouch either as the number two receiver.  He’s amassed quite a few yards and scored double digits in touchdowns.  Kahlil Taylor leads the Bulldogs’ ground game.  No statistics were available as of this writing for Jones or Taylor.  LB Roderick Jeter is one of the main guys on the tough Bulldog defense.

Beating Westinghouse will be a very, very tall order for Central Clarion.  Therefore, the Wildcats absolutely must control the clock and keep the explosive Bulldog offense off the field.  Secondly, Central Clarion has to get a few turnovers and convert them into scores.  Thirdly, the C.C. defense has to find a way to slow down the House, not only through turnovers, but stops too, and frustrate them into making uncharacteristic mistakes.  If Central Clarion does those 3 things, they have a shot to win.  For Westinghouse, the road to winning is simple, just keep doing what has worked all year.  Use their speed advantage and make big plays on offense.  Keep turnovers to a minimum.  Defensively, they need to prevent the long pass plays that Central Clarion has had success with all season long.  On paper, Westinghouse should come out on top.  But that’s why they play the game, because in football anything can happen on any given day.