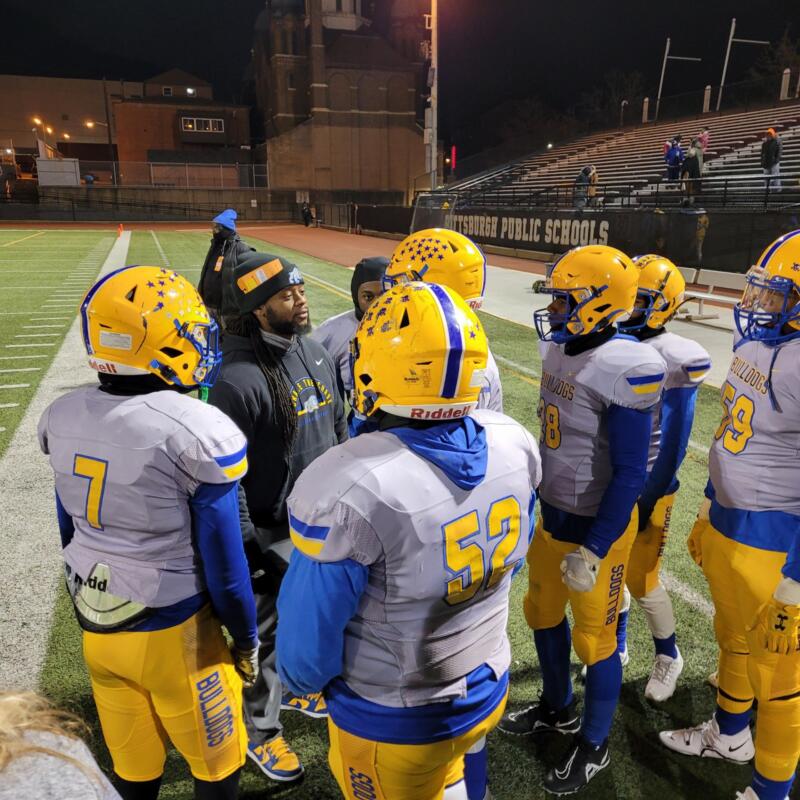 Coach Green talks to his players

Donta Green has been building something the City hasn’t seen in many years. It’s been since 2006 since District 8 has sent a team to the quarterfinal round when now defunct Oliver played General McLane. Last night, the Bulldogs advanced to that round with a resounding 44-8 win over Central Clarion. They’ll face the winner of today’s Farrel/Sharpsville game at Cupples Stadium next weekend.

Kyshwn Robinson got things started with a short td run, the two pointer made it 8-0 Dogs with 2:15 left in the first quarter. Then it was Keyshawn Morsillo who hit Davon Jones for a 19 yard td pass to put Westinghouse up 14-0. Morsillo had to avoid the sack to make the play.

Running back Khalil Taylor crossed the line with a short td run, once again the two pointer missed but the Bulldogs were on their way with a 20-0 lead with a minute remaining in the first half.

To start the second, Taylor made two brilliant runs, then Jones ripped off his own brilliant run before the Bulldogs scored to make it 28-0.

Jones rips off a run

Roderick Jeter made it 36-0 to start the mercy rule clock running. The Westinghouse defense kept 2800 yard passer in check all night, only allowing Jase Ferguson 87 yards in the air.