The 2020 Columbus City League Championship game was held this afternoon at Africentric Early College high school and I have to say they have A nice little stadium there and the P.A. system is loud and clear during the game. The title came down to Eastmoor  Academy and Walnut Ridge. The first time I watched Walnut Ridge play they were led by A talented quarterback named Howard Thornton. The 2nd time I watched them Thornton was setting up in the stands and he told me it was the decision of his coach as to why he was not playing. Today I did not see him at all in the game. The Warriors, who I just saw last week looked like the same strong-minded team as they did against Independence but offensively they were A mystery as they looked of kilt the whole game.

The first quarter went by quick with neither team giving much ground with both defenses easily shutting down middle run after middle run. Walnut Ridge would find A little offense that resulted in A 5-yard scoring run by Javarus Leach making this A 6-0 game. Darron Brown was stopped by Brandon Lovelace on the 2-point conversion try keeping this A 6-0 game, with 4:04 left in the quarter.

The Scots defense would get A sack on Ahmad Armstrong when Jamarius Dinkns busted loose to plow him over. There would be one more big play in the quarter and that came when Leach broke free for A big 18-yard run that had 15-yards tack on thanks to a flag being thrown on the Warriors.

The Scots drive would quickly come to A halt thanks in A large part because Diamonte Salley threw Leach down for A 5-yard loss. On the ensuing drive, the Warriors offense went to the air with the result being A 85-yard touchdown pass to Isiah Pressley on A nice pass thrown by Armstrong. Aaron Dixon missed the P.A.T. kick so this one stayed even at 6.

The half ended with each team coming up big once. For Walnut Ridge Leach was able to convert A fourth and three by picking up 4-yards and for the Warriors its defense would stop Leach for A short loss when Khyren Mann put him down. For the half, the Scots had a total of 74 yards, while the Warriors had just 68 and all of those came on the long touchdown play.

The first big play of the 2nd half came from the Warriors defense with Tramon Hairston easily picking off A Daaron Brown pass off when Brown threw into triple coverage. The next play of the half that was big came when Leach galloped to A 64-yard run that would have gone for A touchdown, if not for the hustle from Pressley, who came from nowhere to make A nice tackle. The promising drive ended when Leach was stopped by Lovelace on A fourth and one try. The Scots defense came up with the big when Kristopher Mason was hit hard causing the ball to pop free and catching it for the fumble recovery was Jabar Sellers.

With 8:37 left in the game, the Warriors seemed to have pulled off A double pass with Cameron Foster for A 78-yard touchdown but another penalty on the offense negated the play. From There Dinkins sacked Armstrong for A short loss. The biggest defensive play of the game would come from the PAFOOTBALLNEWS PLAYER OF THE GAME JAMARIUS DINKINS A warriors fumble on a bad quarterback to running back exchange giving the Scots A first and ten at the Warriors 14-yard line. Leach would cap off the drive on A 2-yard run, he also converted the 2-point conversion by running the ball into the endzone.

The last 6:52 of this one would see Pressley fumble the ensuing kickoff and making the recovery for the Scots was Tywan Glass.  After shutting the Scots down Pressley would field the punt close to his own 20-yard line and take it all the way to the Walnut Ridge forty. The drive would not amount to anything in A large part thanks to Wesley Armstrong sacking Armstrong for A 13-yard loss. From there the clock would slowly tick away the final; 4:13 seconds of this one, with no more action coming from the offense. 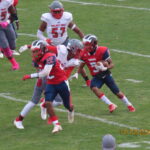 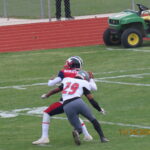 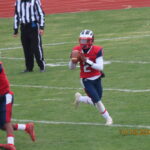 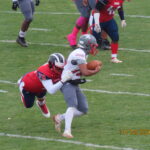 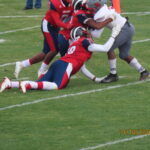 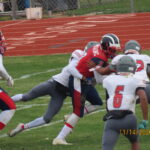 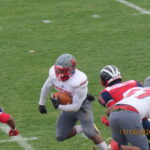 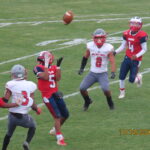 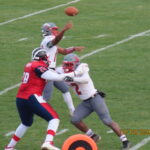 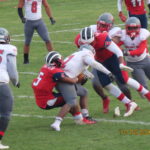 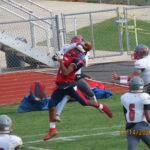 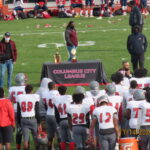